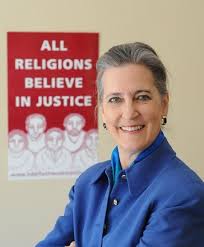 Taking on Moral Gridlock in Washington, DC. What You Can Do About Low-Wages and Worker Injustice – by  Kim Bobo and Michael Livingston, Interfaith Worker Justice.

Ana Julia Fuentes has worked as a janitor at Union Station for 23 years and makes $8.75 an hour. Wilfredo Reyes Lopez is a recent widower with three children living together in a single bedroom. He’s a cook in the Reagan building making $6.50 an hour. Ana Salvador has worked at McDonald’s at the Air and Space Museum for 11 years. She’s a single mother with four kids getting SNAP benefits and Medicaid. Jonathan Ross is a single father making $9.71 an hour at a restaurant in the Smithsonian Institute’s American History Museum. He’s had three raises in four years, none more than $.15.

Low-wage workers drive officials to meetings, serve them lunch in federal cafeterias, care for their children at government day care centers, sew and launder the uniforms of the soldiers who serve our nation, clean their offices, guard the building in which they work, and pick up their garbage and recycling. These workers also serve the millions of people who visit the nation’s capitol; they work in the food courts at Union Station and the Ronald Reagan Building, greet visitors at the museums of the Smithsonian, sell memorabilia at gift shops, as well as lead sightseeing tours and recreational activities in our National Parks.

A recent survey of responses from workers who provide food, retail, janitorial, sightseeing and other services on federal property in Washington, DC shows:

A recent report by Demos (a public policy organization) cites a startling fact: “We find that nearly two million private sector employees working on behalf of America earn wages too low to support a family, making $12 or less per hour. This is more than the number of low-wage workers at Wal-Mart and McDonalds combined.”[1]

Demos defines low-wage work as pay at or below $12 per hour, an equivalent of about $24,000 per year. Even a single person earning that amount would be hard-pressed to find decent housing, pay for food, health care benefits, and transportation. For a single parent with one or more children and the additional burden of child-care, the challenges are overwhelming and cannot be met without relying upon tax-supported federal benefits like food stamps and Medicaid and the support of extended families and friends. 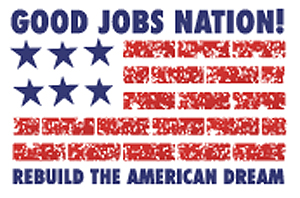 Workers in Washington D.C. have had enough. They have banded together to form Good Jobs Nation, a union for workers in federal properties employed by companies granted federal contracts. Growing numbers of these workers, at places like Union Station, managed by the Department of Transportation, the Smithsonian museums and the Ronal Reagan Building, managed by the General Services Administration, have begun to go on strikes to demand that they be paid a living wage and other basic benefits that lift them above the “poverty pay” they now receive. In recent weeks, supported by Our DC[2], Change to Win[3], and Interfaith Worker Justice[4], workers of Good Jobs Nation have “arrested” Uncle Sam for wage theft and held public demonstrations and marches to tell their story to the public.

In a letter to the President on July 2nd, seventeen members of congress wrote, “By organizing to expose federal government complicity with their low wages, these workers have stepped to the vanguard of today’s controversy about the unprecedented income gap in our country characterized by falling middle-class and low income wages and rising incomes among the affluent and corporations. This gap cannot be addressed if our country continues to tolerate wages that leave workers in poverty…”

Roxanne Mimms is a cook at the Smithsonian National Zoo and dreams of one day owing a restaurant she can leave to her children. She isn’t paid enough to adequately house, feed, and clothe them and depends on government benefits to make ends meet. A sewing machine operator working for a federal apparel contractor (who feared giving her name) reports making $7.25 an hour after 24 years on the job. She’s rarely able to make “production” which pays $10.25 an hour and has a health care premium of $3,000. She has had to file for bankruptcy. Fedelina Santana has worked 9 years at the Ronald Reagan building and makes $9.50 an hour without benefits. She has to work 73 hours per week in order to make ends meet.

President Obama said in his State of the Union Address this past January, “…in the wealthiest nation on earth, no one who works full-time should have to live in poverty…” We agree. And with the stroke of his pen, our president can change this disturbing reality and set a powerful example for small employers and large corporations alike. In 1965 President Johnson signed an Executive Order banning discrimination in employment by government contractors. President Obama can sign an executive order ensuring that workers employed by federal contractors earn a living wage.

For the faith community this is a moral issue. When the least among us — whom Jesus called “…members of my family”[5] — suffer, we are all responsible. “You shall not steal,” is one of the most important tenants of many faiths, and some variation of the “Golden Rule” is common as well, across every major religion. As people of faith and as a nation built on the foundation of a government of, by, and for the people, it is intolerable that corporations doing business with our government take advantage of their workers. Our tax dollars support food and health care for low-wage workers while the companies that employ them make enormous profits and their CEO’s are paid bonuses in the hundreds of millions of dollars.

Before and after Labor Day this year, low-wage workers in cities all across our nation will be walking off their jobs to raise their own voices about their plight. People of faith can and should support them.

We can remember that we worship God not only in the lovely sanctuaries that are our spiritual homes, but in the streets and workplaces of our nation where too many millions of our brothers and sisters, created as we are in the very image of God, toil with far too little pay for the valuable service they render us and our society. All labor has dignity, Martin Luther King, Jr. once said. The writer of Ecclesiastes asks, “What gain have the workers for their toil?”[6] Our witness in support of low-wage workers can help our society answer that question with the following: They are paid fairly and justly. They can afford to feed and house their families. They can afford health care. They can live in the abundance of our God created world. They have our love and respect.

Co-author Kim Bobo is the founder and executive director of Interfaith Worker Justice. She wrote Wage Theft, the definitive text on business practices that rob U. S. workers of billions of dollars.  Co-author, the Rev. Michael Livingston, former President of the National Council of Churches, is a Presbyterian clergyperson and National Public Policy Director of IWJ in Washington DC.
NOTES:

[2] Our DC is a non-profit organization that works to bring good jobs to the District of Columbia.

[4] Interfaith Worker Justice is a non-profit faith-based organization whose mission is to engage the faith community in support of low-wage workers.

Re-inventing the Wheel or (Re)moving the Goal-posts?

In September 2015, about 70 Presbyterian and Reformed African women church leaders

Dr. Iosso was aided in this article by consultation with an academic

The Other Christmas Children

Labor Day is usually thought of as a time of

As some of us take our rest on Labor Day,