A RESPONSE TO THE OCCUPY MOVEMENT

November 1, 2011, by Editor Chris Iosso, who invites Christians into dialogue about the role the church should play in the Occupy Movement. 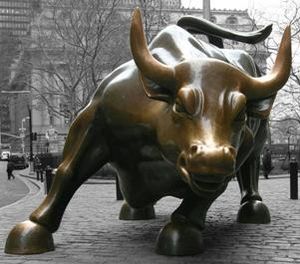 A golden calf—that looks like the Wall Street bull statue—is carried through New York’s Zuccotti Park encampment by a bunch of ministers. Truth telling and fun, for a group now in Valley Forge mode. A Rev. Brian Merritt makes the equal sign on the foreheads of folks in an outdoor ceremony at Occupy D.C. (or K Street). Rev Billy, whom the New York Review of Books calls a “Billy Graham Impersonator,” does some outdoor preaching—more John Wesley’s style really.

The semi-Quaker, semi-Anarchist gatherings adhere to an ultra-democratic process that is almost ritual, despite the everyday-transcendent quality of the occupations, what a ReligionDispatches.org author calls the “rupture of the ordinary” (http://www.religiondispatches.org/archive/politics/5268/god_dissolves_into_the_occupy_movement/). Some of us think about reversing Jesus’ story of the one lost sheep to look at the 99 “lost” in our current economy, as does InterfaithWorkerJustice.org.

But what do you think about this mixture of protest and teach-in and awakening? This piece is meant to prompt a dialogue. Fundamental point to debate: Are these events in tune with the Spirit of God? Would Jesus be allowed to speak—when Occupy Atlanta did not allow Congressman John Lewis to speak—despite his great civil rights record? And do the police, who have notoriously attacked the Occupy Oakland effort—one of the most ethnically diverse—have reason to worry about these non-violent souls? Should our church leaders speak out—as have the UCC and others?

Further, in this editor’s view and as weather gets colder, Jesus’ hospitality suggests that wherever possible we open our churches to these fellow and sister citizens as they gather and include a percentage camping outside. Certainly, with few exceptions, the Occupy protests have shown thoughtful democratic organization and respect for public order, despite their anger at what they perceive to be failures in our economic order. At the same time, in London, the Dean of St. Paul’s Cathedral has resigned over a kind of impasse with protesters around that building. So it may be quite a debate in any church, even if the protesters were willing to come inside.

Of course, the Presbyterian General Assembly has not spoken specifically to the recent spread of outdoor protests focused on economic inequality and the role of our financial sector in the undeniably uneven distribution of wealth in our country. Yet we have shared those concerns—see below. And the Presbyterian Church (U.S.A.) has been steadfast in supporting the right of Americans to assemble to protest, to petition for redress of grievances, so we should honor that right today, whatever the mix of conviction and ferment motivating what the protesters call their “general assemblies.”

Some see the origin of current protests in the response of Wisconsin citizens last winter to efforts in that state to eliminate public employee collective bargaining and unilaterally reduce retirement benefits. Others point to September 17, 2011, the beginning of Occupy Wall Street, suggested by “adbusters” and supported by the internet group, “anonymous.” From a faith perspective, we look to perennial human needs for justice and dignity, needs that are best served by institutions with democratic accountability. One aspect of the occupy protests is their notable distrust of institutions and markets seen to be “rigged” in favor of the powerful. As leader of a religious and social reform movement in Palestine, Jesus himself denounced violence, greed, and oppression while resisting moves to treat God’s reign as a conventional kingdom or political faction. God’s justice and peace put all the claims of caesars under judgment. Even the church, in our Protestant tradition, is to be reformed and always being reformed, ideally an example to all organizations.

Much has been said about the protesters’ lack of specific demands and their refusal to align themselves with either major political party. Those are strategic judgments about power and purity of message; their concerns are clearly about the social application of morality, concerns that the Presbyterian Church and its ecumenical partners have long shared. In recent years, the General Assembly has addressed that inequality in the Social Creed (2008) and in a report on the theology of compensation, “Neither Poverty Nor Riches,” just last year. Last year’s Assembly also authorized a study team to work on the economic crisis, including its impact on inequality and poverty affecting the church itself. Thus this statement is meant to emphasize mutual understanding between Presbyterians and the protestors, some of whom are our own children, relatives, and neighbors.

In a way, the protests have been the equivalent of the young boy in the story who pointed out that the king had no clothes on, after he had been beguiled by charlatans pretending great fashion sophistication. That parable about conformity was also about the role of prophetic voice, challenging widely accepted but really unacceptable patterns of accommodation to power. In this case, the critique is addressed to Wall Street financiers and their enormous wealth, but also to a political process that is in fact corrupted by unlimited funds from those, yes, in the top 1%.

Many Presbyterians are in the top 1%, and many of us have worked very hard for that economic success. This editorial does not deny the need for productive and creative industry and achievement. It does, however, support the need for equitable distribution of productivity gains in our society, and a society where benefits and burdens are more fairly shared. We would urge the Occupy movement to look at the Social Creed for the 21st Century affirmed by most mainline Protestant and Orthodox churches. Among its affirmations, the churches call for:

With more than 25 million US citizens unemployed, underemployed and discouraged from even seeking work, the mainline churches have consistently called for the government to take the initiative in measures to restore full employment. We believe that every person, created in the image of God, has a vocation to serve that common good. In prior versions of the Social Creed, such as that during the Great Depression in 1932, the General Assembly has also called for fair regulation and taxation to eliminate poverty and to protect citizens from boom and bust business cycles and exploitation by those with inordinate power, whether economic or political. The recent Social Creed calls for:

These are hardly new ideas, but they must take new forms under new pressures and with honest awareness of environmental and other threats, including the morally corrosive nature of inequality and the undemocratic consequences of unlimited money in politics.

But Occupy is also about expanding the political imagination, or perhaps re-grounding it. One-time Presbyterian seminarian Chris Hedges points out the radical inclusiveness that integrates street people and an engagement of those with squatter and off-the-grid experience: read his article.

Let us then respond to these widespread protests with historical understanding and join with all persons in our society—not only the Occupy protesters—who are encouraging major, constructive reform of both our economic and political institutions. And if our church buildings can provide hospitality for dialogue and debate, may that, too, be a constructive opportunity for mutual understanding.

The Rev. Christian Iosso, Ph.D., is the Senior Editor of Unbound and Coordinator of the Advisory Committee on Social Witness Policy.
Banner photo comes from Wikimedia Commons by S51438.

Join the conversation in the Unbound forum section!

Faith in the Public Square – A Time for Choosing

Faith in the Public Square – A Time for Choosing

In March 1948, theologian Reinhold Niebuhr graced the cover of