It is justice, not vengeance, to investigate thoroughly and prosecute resolutely all public officials who have put private interests above the common good.

If broken windows in a neighborhood can justify a more visible police presence—with community involvement—to prevent larger crimes, then the countless examples of self-dealing and conflict of interest require similar cleansing work in our government. Further, the trials of public officials should be televised whenever possible to re-establish trust and belief in the rule of law. Whether or not citizens believe in a God who judges for truth and justice, public trials are necessary civic liturgies that enact the principle that no human being is above the law.[1] Television coverage and commentary on that coverage (including Youtube and other digital outlets) are the primary ways a plurality of Americans get their news.

The direct televising of corruption trials would affirm that violations of the common good—including tax evasion—are taken seriously, and would prevent distortion by other media vehicles and commentators. Currently, while states generally allow some level of camera coverage in courtrooms, sometimes at the discretion of the judge, most federal courts and the Supreme Court do not allow video coverage (the Supreme Court releases audio recordings). This proposal argues that trials involving public servants, both criminal and civil, deserve to be more public, with appropriate visual screens for juries if this is deemed necessary.

These public trials should include not only Congressional impeachment hearings and deliberations and the prosecution of corrupt cabinet officials on the national level (as these are warranted) but also trials of state and municipal officials who steal votes, tax monies, and other kinds of public goods. Juries empaneled prior to the start of trials would be less affected by the “court of public opinion,” as there would be more court itself on TV, and less ungrounded opinion.

Televised trials would not be “show trials” or “kangaroo courts,” designed to induce terror or dispense arbitrary judgments. Rather, like the trial of Adolf Eichmann in Israel, the largest purpose would be to give citizens a direct view of how a range of crimes are defined and their consequences assessed. While in Eichmann’s case these were crimes of war and genocide, today’s crimes of profiteering would include ecocide in various forms and cyber-crimes, including personal data stealing and creation of scam websites and actual “fake news.” It might well be that the prospect of televised judicial process (not simply hearings) would serve to deter crime and encourage out-of-court settlements. 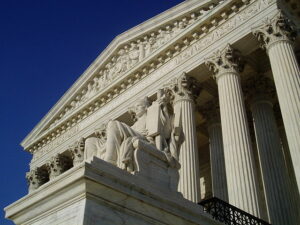 A wider range of televised trials might also improve the quality of judging, discouraging discriminatory rulings from an increasingly partisan judiciary.

The supposedly “populist” calls to lock up an opposing candidate or “drain the swamp” contain moral impulses that, while misdirected and dangerous, are also motivated by a history of real abuse. As is widely recognized, the Obama administration’s decision to bail out the banks without jailing the bankers responsible for the 2008 credit crisis seemed to reward perpetrators without reversing countless unjust foreclosures. Then, when no CIA and Defense Department decision-makers involved in the George W. Bush-era torture program were prosecuted, the whole security apparatus was tainted. The on-going violation of the Constitution at Guantanamo Bay, though now overshadowed in the media by the indefinite imprisonment of children at the border, has been made easier by the moral numbing of constant warfare. Therapists and theologians speak of “moral injury” among veterans, caused partly by a lack of moral clarity in purposeless, “zombie wars.” The lack of public accountability in these cases shows that the failure to prosecute our own “bad guys” is a serious moral hazard for society.

To argue for televised, public trials is to presume that a large number of trials are needed, given the rise in corruption encouraged by bad campaign finance laws and widespread dereliction of duty in regulatory agencies designed to protect the public. It is not “Trump derangement syndrome,” but “attempted law re-arrangement syndrome” that is rightly disturbing to many people, as it challenges our sense of moral order. People see that the obvious corruption of officeholders—for example, in letting money from U.S. arms sales outweigh the assassination of a journalist serving a U.S. newspaper—leads to serious human rights violations that, in turn, weaken our country. The US cannot claim to stand for any standards abroad if it dishonors the rule of law at home, and vice versa.

There are ethical swamps to clean up wherever lobbyists and managers from regulated industries run regulatory agencies. Vigorous prosecution of power-abusing corporations is needed to prevent public health disasters—cancers and illnesses as well as fires and floods—caused by negligence as well as attacks on protective procedures and scientific monitoring work. To do otherwise incentivizes bad behavior from other corporations! It is a properly populist measure to have public prosecutors and legislative investigations go after “malefactors of great wealth,” given the impunity that wealth otherwise provides for the 1% in our very unequal society.

Financial wrong-doing and fraud require stronger consumer finance protections and prosecution of tax evasion, including shutting down the tax havens that abet it. Weakening the IRS encourages tax fraud and effectively expands loopholes that allow corporations (from Apple on down) to withhold billions needed to upgrade our infrastructure and educational system. The New York Times’ documentation of the Trump family’s apparent multi-generational practice of tax evasion confirms the clear need for all public officials’ tax returns to be made public—not just POTUS’.[2] Without vigorous prosecution of tax evasion, the tax base will continue to erode—especially unwelcome when this administration’s tax cuts for the wealthy have reduced revenue and increased government borrowing, leaving the middle and lower class to bear the tax burden instead.

Cynicism about politics has focused on the gerrymandering and the voter suppression so evident when officials running for office also run the offices that run the elections. Yet the corruption of the media due to unregulated dishonesty—most obvious on social media, but equally destructive when televised—normalizes campaign abuses, which are excused as just being “politics.” A hamstrung Federal Election Commission is partly to blame, but a new “Fairness Doctrine” is needed to raise the public cost of lying in a significant way. Televised, public trials of partisan election officials might build support for non-partisan electoral machinery based on a clear right to vote for every citizen.

This overall approach may be seen as unforgiving and very “Old Testament” in style, yet there is a vivid story of the power of public disclosure in the New Testament book of Acts, chapter five. The early church in Jerusalem has just decided to share all resources in a common purse. Yet a corrupt couple, Ananias and Saphira, conspire to hold back part of the sale of some property. Their concealment of the funds withheld is seen as a lie to God, and when the Apostle Peter publicly confronts them on it, they immediately die of God’s judgment. The intensity of public exposure is not likely to work in that manner today, but the idea of betraying the common good still causes moral revulsion. The ethos of selfishness has not yet poisoned all our democratic values, and it must not be allowed to do so.

Politics is a high calling based on the conviction that public institutions should do justice, and that public servants serve the common good. The word, “high,” refers to the wide scope of serving a whole community and, traditionally, the sense of serving a God who holds all communities accountable. This is represented in public officials swearing to uphold the US Constitution upon a text they hold sacred—usually a Christian or Jewish Bible. Lady Justice, the personification of the virtue of equal regard, carries a scale for weighing actions and consequences.

Lady Justice also carries a sword representing the power of the state, based in the power of the people. When that sword is broken, the wicked rule without consequences. When public goods are used for self-enrichment, and elected officials change the rules to be judges in their own causes, cynicism grows. More prosecutions may help drain the swamp, but the swamp gas needs to be dispelled by the additional remedy of public transparency.

Elected officials, prosecutors, and television programmers should not be afraid of calls for more prosecutions to un-rig the system. Such a time of corruption is the right time to reassert the moral use of power in a very public way.

[1] The 2018 General Assembly of the Presbyterian Church (U.S.A.) approved a resolution on responsible citizenship entitled, Honest Patriotism: https://www.presbyterianmission.org/wp-content/uploads/Honest-Patriotism.pdf  This editorial goes beyond the specific wording of that resolution and, as in prior Unbound editorials, seeks to prompt discussion of that policy and other expressions of Christian social and ethical teaching.

Author Bio: Chris Iosso, General Editor of Unbound, is a Presbyterian minister who has served as a pastor and in several ecumenical and denominational social justice posts. His PhD is in Christian ethics, and he has taught part-time in three locations, including Sing Sing prison in Ossining, NY. During his pastorate he developed a public access TV interview program, Conversions: the Journey to Meaning.

In Defense of Truth

In Defense of Truth

In the McCarthy Era, newspapers had a problem. They tried