The Green Zone: The Environmental Costs of Militarism by Barry Sanders, AK Press, 2009 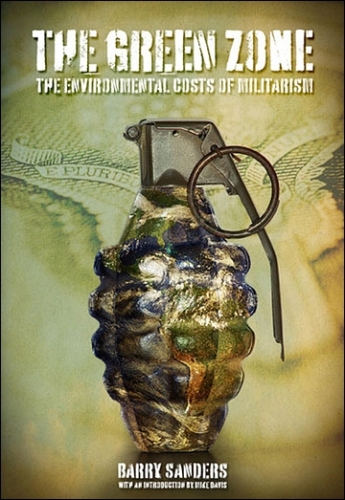 In the wake of Hurricane Sandy and for those of us concerned about environmental damage and how to work against it, this book is an important read. It asks the central question: what about the environmental costs of militarism? Usually we count bodies, or people, budget numbers, or years of a conflict. But what if we counted the costs to Creation?

What does war and militarism do to the environment? What about the recent military quagmires and their environmental damage in places like Iraq and Afghanistan? This book answers these questions. The answers are shocking and should call us to even greater attention and urgency around peacemaking in our time.

Simply put, militarism is the #1 threat to Creation.

The writer Barry Sanders reminds us that we all know the typical “to do” list of ways to combat environmental harm—recycle, compost, use solar energy, eliminate plastic, eat fewer animals, and so on. But what should be on these popular lists, never is—eliminate militarism. Sanders argues that the U.S. military is the “single largest source of pollution in this country and in the world.” This proverbial “200-pound gorilla in the living room” rarely gets a mention when we talk about reducing our environmental impact. And the situation is urgent. Sanders eloquently argues that, even if every single one of us on Planet Earth took all the “green steps” recommended by the experts. the world would still be hurtling toward environmental and climate disaster because of the huge footprint that militarism in all its forms exacts on the earth.

This book is a wake-up call about why our congregational and denominational ministry around peacemaking is so essential. While faith communities are awakening to the promise of environmental ministries, militarism is often the taboo topic, with many thinking that it would somehow turn off their followers. Two years ago I finished a Fellowship Program with a nationwide interfaith environmental organization. But when I brought up issues of militarism, the other people in my program didn’t want to have the conversation. Don’t we, though, have a responsibility as people of faith to begin these conversations?

A few shocking statistics from the book to pique your interest:

There is much more in this book—so many details that would take pages to unpack. It seems to me, as a person of faith, that this book asks some important questions of us and offers opportunities for ministry and witness as people who follow the nonviolent Christ.

This book has been an essential part of my ongoing awakening to the costs of militarism. I need the information and statistics it provides if I am going to be able to talk about the costs of militarism when we think about God’s Creation. Our denomination has begun a study on peacemaking and nonviolence through our Peace Discernment Process. I hope that these conversations around God’s beloved Creation can be part of the conversations each one of us have with our communities of faith. And when we look at the devastation of the recent Hurricane Sandy and we hear conversation about how global warming contributed to its ferocity—remember this: all the changes to our habits and lifestyles are not enough. We must also end militarism.

Learn more about The Green Zone by Barry Sanders

Rev. Shannan Vance-Ocampo serves as Pastor to the Watchung Avenue Presbyterian Church in North Plainfield, NJ, and on the National Committee of the Presbyterian Peace Fellowship where she helps with the Colombia Accompaniment Program. Shannan has been traveling to Colombia for the last 13 years and has had the opportunity there to witness firsthand the effects of militarism and its accompanying environmental damage.  She is a Fellow with GreenFaith and a Certified Christian Educator in the PC(USA).
Share this
Tags:

On Being a Christian, Earth-Caring Poet in Dark Times

In September 2015, about 70 Presbyterian and Reformed African women church leaders

Dr. Iosso was aided in this article by consultation with an academic

The Other Christmas Children