On October 22, the Presbytery of Transylvania’s Eastern region hosted a lunch with representatives of the Advisory Committee on Social Witness Policy, the Presbyterian Hunger Program, and Self-Development of People. This is a brief report on why that conversation was begun, what ground it covered, and where it may go in the new year. 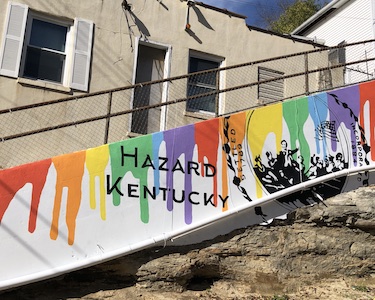 In recent years, the PC(USA) has practiced a pattern of listening and learning from urban ministry struggles in the face of racism, poverty, and systemic economic abandonment. These explorations have been focused around cities where the General Assembly (GA) has met. The GA affirmed “The Gospel from Detroit” in 2014 and “The Gospel from St. Louis” in 2018—both created mainly by city pastors in coordination with ACSWP. A similar dialogue is hoped for with pastors in Baltimore, the site for the upcoming 224th GA in 2020, preceded by the Big Tent gathering, August 1-3 of next year.

While the Urban Ministry Network will continue to assist those city conversations, the Advisory Committee and other ministries of Compassion, Peace, and Justice were aware of economic and environmental justice issues in many rural areas. Shouldn’t a similar listening and visiting process engage those regions? General Assembly policies in 2012 and 2014 called on Presbyterians to address the impacts of growing economic inequality across the whole church, and the 2016 and 2018 Assemblies lifted up concerns for Native American lands and Puerto Rico. In light of these concerns for underserved constituencies in the church, it was decided to begin in the national offices’ own backyard. Initial contacts were made with Presbyterians in the Appalachian part of Kentucky itself, where churches have long been involved with communities and with ministries.

The issues of justice in Appalachia, when compared with inner city poverty, had striking parallels:

Around the room, the pastors echoed frustration with the frequent question, “Why don’t you just leave?” The region faces massive depopulation, as many do indeed decide to leave. But there are cultural and social ties that bind people to the area, and nearly all of the pastors in the meeting work at least two positions in order to be able to stay and serve their parishioners…they are called to do this ministry. Yet, outsiders question why they bother.

One offered another explanation for why people stay: “When you are hopeless, why go somewhere else?” And sometimes it is hard for the church to be a hope-bringer.

The conversation turned to climate change and energy—a potentially touchy subject within areas economically driven by coal—and yet the room filled not with anger or dismissal, but with compassion and realism. The local pastors acknowledged the effects of coal on the environment and in fact added poignant details. One told about his black and white cow, and how when she would walk into a stream to get a drink she would come out orange from mining runoff. They were equally aware of the black lung epidemic that stems from overexposure to coal and rock dust.

At least for these pastors, folks in the area are hardly in denial about the dangers of coal. But neither are they flush with other options for work and sustenance. It’s one thing to give up profiting from fossil fuels if you are an investor with other potential investment options. It is quite another to give up a job that feeds your family.

National staff, for their part, agreed that a “just transition” was a necessary goal. Standing with the suffering means standing both with the victims of climate change and with the victims of the coal mining industry’s collapsing economy. It was also pointed out that some of the poorest counties in Appalachia are not, in fact, the coal counties—which at least recently had some higher-paying jobs and adjustment programs.

What would a just transition look like? As outsiders, the Louisville folks were reluctant to speculate. For some, like Presbyterian social critic Chris Hedges, the environmental “sacrifice zones” across the country are an argument for alternative economic development in sustainable industries. Bioregional re-direction of food systems could be part of this and, in fact, is already being done. Government initiatives, though sometimes resented, have also led to prosperity and better health in the past. But local people have been working on these matters for a long time, sometimes in ecumenical partnerships.

Unfortunately, as Andrew Kang Bartlett noted, the ecumenical Commission on Religion in Appalachia ended due to insufficient funding in 2006 after 41 years of work, leaving relatively few church-related networks or advocacy organizations in its wake. Overall, the denomination may be overdue for updates to its 1985 and 1991 policies on “the rural community in crisis,” available in the booklet Responding to Rural America.

Mary Love spoke about the RECLAIM Act (Revitalizing the Economy of Coal Communities by Leveraging Local Activities and Investing More), which has been introduced by Representative Hal Rogers of Eastern KY alongside a complementary Senate version by Sen. Mitch McConnell. It would release money from the Abandoned Mine Lands (AML) Fund created under the Surface Mining Control and Reclamation Act of 1977 (SMCRA) to be used immediately to reclaim land used for strip mines and abandoned when the mine was closed. Thanks to grassroots efforts, the Rogers version of the bill includes two amendments. Firstly, it includes a “redevelopment clause” that would mandate the funds be used in ways that restore the lands in a way that makes them suitable for economic benefit. Secondly, the Rogers version of the RECLAIM Act calls for community involvement in the selection of sites and goals for reclamation.

This kind of engagement is definitely needed if these communities are to have a real chance at recovery. Because the price of renewable energy is decreasing, local coal jobs are not coming back—even if government subsidies lead to short-term continuation. Residents in Hazard and surrounding areas are rightly skeptical of outsiders coming in with options that are “for your own good.” For any sort of development to match outside capabilities with local support, real relationships and trust need to form.

A few avenues of advocacy are already clear, in addition to supporting the RECLAIM act: coal severance payments that fund the Black Lung Disability Trust Fund (part of the Federal Coal Mine Health and Safety Act of 1969), and thus cover 25,000 victims of the disease, are in danger of being reduced by 50%—at a time when the incidence of Black Lung disease has climbed higher than ever before. Continued funding of United Mine Workers Health Care coverage is also an important area of advocacy.

In the context of the Church’s mission, it seems likely we will continue to try to alleviate suffering in local ways while advocating for changes far beyond our direct financial power. To go deeper and think new ideas will require more listening and learning, prompted always by the energy of Christian love.

Appalachia requires unique strategies for change. As Chloe Soliday wrote in Unbound last Spring: “If we want to seek justice and wholeness for the Appalachian region, we must first look to our own hearts in order to change the hearts of others who have mistreated Appalachia for so long.” While the playbook of injustice repeats itself wherever unchecked power and economic inequality rule, the congregations in Eastern Kentucky show their own regional self-reliance and ingenuity. Any partnerships from outside the region will need to build on those strengths, rather than imposing their own sense of order or priorities.

At closing, the participants agreed to pursue further conversations within the presbytery and in other parts of the region that will focus on its diversity. Mary Love indicated that SDOP had already arranged a February meeting with four regional development groups. Each of the national General Assembly Committees will hear initial reports, and the pastors will share their reflections.

Author Bio: Henry Koenig Stone serves in Louisville, KY as Managing Editor of Unbound and Associate for Young Adult Social Witness. He holds a B.A. in Economics (2015) from the University of Chicago and an MPP (2017) from UChicago’s Harris School of Public Policy.

The Mission Coordination Committee of the General Assembly considers: “Mission