Starting the Conversation at Home

“Go to college”, they told me. “It’s the only way you can get a good, well-paying job.”

I graduated college in 2007. The economic downturn started right before I graduated. I majored in English, not exactly what most people consider a ‘marketable’ or ‘practical’ degree? Some might say I was already thrown to the wolves before I even finished college.

Did I mention I went to a somewhat expensive private school? Yes, I know what you’re about to say: I’ve heard the arguments about how I could have gone to a cheaper school – or a school where I got better financial aid – many times at this point. I did what many students in their last year of high school do: I went to the school where I felt I was being called, and, honestly, I do not regret my four years at my undergraduate institution one bit. When I graduated college, I owed nearly $50,000 in student loan debt and was unemployed for almost six months before I finally found a low-paying office job.

“Can’t find a job? Well, you should have majored in something more ‘practical’, like economics or business or medicine.” Yeah, that would be great…if those were the subjects where my skills and passions lie. They’re not.

“Well, have you considered graduate school? That will lead to a great job!”

I’ll be graduating seminary in just a few short months. I will have a Master’s degree, which the generations before me assured me would open so many doors upon graduation. But even more than that, I felt called to go to seminary – and I felt called to my particular seminary (San Francisco Theological Seminary), despite the fact that I received little to no financial aid. Thus, I will graduate seminary with close to six figures worth of student loan debt.

I imagine at least a few of you are familiar with the difficulties of the call process in the PC(USA) right now. Churches are closing their doors left and right. There are fewer and fewer pastoral jobs out there and more people seeking those jobs. Churches that were once thriving are now having a hard time paying a salary that can cover all of a pastor’s living expenses, especially when you take into account those student loan payments.

Perhaps you can see my dilemma here. Here I am, about to graduate from a very prestigious master’s degree program, saddled with student loan debt and the constant worry that I won’t be able to find a job once I graduate.

So, what are we doing about it? Is the PC(USA) doing anything to address this crisis? I attended General Assembly last summer, and I was disheartened by the lack of talk about student loan debt for seminary graduates. Certainly I heard messages about changes seminaries are making to try to ensure that their students graduate with little to no additional student debt. And that’s good news! But where do those of us who have already incurred all that debt fit into the picture?

What has our government done to address this issue? I would argue: absolutely nothing. Things are no better now than they were when I graduated college eight years ago. I, like so many in my generation, voted for Obama hoping for large-scale change under his leadership, and yet he’s been stalled at every turn by a Congress who, judging by their approval ratings at the very least, doesn’t seem too preoccupied with caring for the people they claim to represent.

As I write, 40 million Americans carry student loan debt. That’s 40 million people just like me who are shackled with debt that can never be discharged in bankruptcy and is almost impossible to get forgiven.

Yes, I chose to go to college and graduate school, with much support and encouragement from friends and family. Yes, the economy tanked right before I graduated from college. And yes, I am graduating seminary at a time in our nation’s history when religion is statistically becoming less and less important to people’s lives.

So, is it my fault? Should I have ‘known better’ – or done something more financially responsible than get an education? I personally think that’s the wrong question. Chalking the plight of the 40 million Americans shackled by student debt up to ‘poor choice’ by individuals sounds a lot like blaming the victims. Such an approach does nothing to address the root cause of the problem: the fact that we as a society unilaterally encourage people to go to pursue higher education but fail to support them with adequate financial assistance.

It seems to me that we’ve bought into the lie that student loan debt is brought on by the individual person and not by the fact that our system doesn’t encourage or even allow for any other model. Who in middle-class America has $100,000 saved up that they can just give away to the institution of their choice so they won’t incur any student loan debt?

You know what I think might stimulate the economy? Automatically cancelling every single outstanding student loan! Go ahead, call me crazy; people have been responding to my proposal that way for years.

But think about it for a minute, will you? Cancelling student loan debt would mean upwards of 40 million people who would suddenly have money to spend on things that they couldn’t before – things like houses, cars, plane tickets, you name it! Think about how fast the economy would improve if 40 million Americans suddenly had more disposable income. But of course, that would never happen, would it? That would mean valuing the people taking out loans for their education over the corporations doing the lending! And, as Citizens United never ceases to remind us, corporations are people too.

Here’s what I am trying to get at: Our system is broken. Our system is not designed to help those who need it most. So let’s demand a conversation! Will we call on Congress to cancel all outstanding student loan debt? Or, following on Obama’s free community college initiative, will we seek possibilities to drastically reduce or eliminate the cost of all higher education?

We need to have a serious conversation about student loan debt. It needs to start now, and it needs to start at the grass-roots level. What would happen if congregations had a greater awareness of just how much seminary costs when they encouraged people to go to seminary? How about if seminaries were more intentional in educating students about how to manage crushing debt post-graduation – especially in the increasingly long periods between graduation and finding a job? What would it look like for congregations, as part of their compensation plan for pastors, took on a portion of responsibility a pastor’s educational debt? 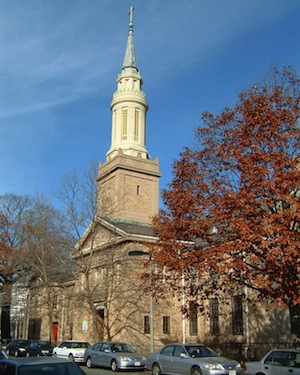 This is how we change the system. This is how we stimulate our economy. This is how we claim ownership over our own lives. It starts with a conversation; it starts by asking the hard questions. Questions like: if we can spend $640 billion dollars on defense spending, why can’t we find the money to better support public education? I know that I, for one, would much rather my tax dollars go toward supporting the education of others than bombing Iraq!

This conversation has to start at home. And for Christians, where is home if not in our churches? Let’s start having those conversations now, before the next generation starts college. We can make a better system for them. They deserve it. We deserve it. Our country deserves it. Let’s bring back some of our Reformed tradition and take our commitment to the “common good” seriously!

AUTHOR BIO: Tad Hopp is in his last semester in the MDiv program at San Francisco Theological Seminary. In his spare time, he enjoys hiking, baking, yoga, and a good movie. He can be followed on Twitter under the handle @taderpillar. He also maintains two blogs: thopp.blogspot.com and hopponpop.wordpress.com.

Read more articles in the “Struggles and Sacrifices” section!