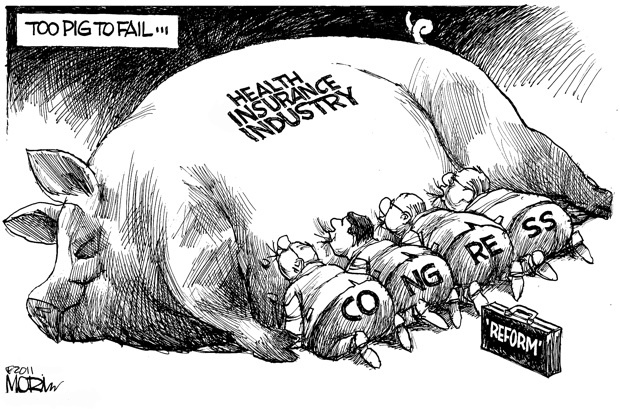 In the midst of a fierce debate on the national level around the Supreme Court’s decision to uphold the Affordable Care Act, the Divestment Campaign for Health Care made its official debut. Its stated mission: “to expose how the health insurance industry puts the need for profit above the needs of patients and to escalate public support for total removal of the private health insurance companies from our nation’s health care.”

Leading advocacy organizations dedicated to single-payer health care are committed to pursuing a divestment campaign from private health insurance companies in order to transform the treatment of health care as a commodity into a basic human right for all people in the U.S. This is a position at some remove from the potential debate over whether to have “Obamacare” at all, or even whether to have a “public option” that would provide a non-profit alternative insurance vehicle. But it is a position closer to the healthcare systems of most developed nations, and indeed, in 2008, the Presbyterian Church (U.S.A.) endorsed “single-payer.”

“We are responsible for our investments, and particularly as health care workers and patients, we see the immorality of the private health insurance companies as they deny payment for care in order to create huge profits for shareholders. Those who stand for a just and equitable health care system must recognize the corrupting force of the private health insurance industry on our political process that costs tens of thousands of lives every year in addition to being a huge financial drain,” states Dr. Rob Stone, M.D.

The Presbyterian Church (U.S.A.) became the first major institution to take steps towards possible divestment from private health insurance. On July 7th, the church’s national assembly unanimously passed a resolution stating they will “evaluate the variance between church principles of universal access and affordability on the one hand and corporate objectives on the other. It will also assess the likelihood of significant change in corporate behavior.” The Assembly’s action, in fact, modified an original proposal from Mid-Kentucky Presbytery in line with the church’s deliberate process of corporate engagement and does not necessarily assume divestment will be the endpoint.

The resolution passed in committee after moving testimony was delivered by Rev. Dr. Johanna W.H. van Wijk-Bos, the widow of the original author of the resolution, Rev. A. David Bos who passed away from a sudden case of pneumonia last year. She stated before the committee:

As he lay in the hospital, struggling with the oxygen mask provided to give his lungs the air they needed, he spoke haltingly what would be his last words on this earth: ‘How much will this cost?’ He died six days later. Three weeks after his death a representative from our health insurance company informed me in a telephone call that they rejected the claim to pay for my husband’s hospitalization and medical costs because of a ‘pre-existing condition.’

Rev. Dr. van Wijk-Bos felt confident the work they had done would lead to full exposure of these corrupt companies because, in her view, “corporate interests are incompatible with patient care.”

On the heels of this surprisingly strong affirmation from the Presbyterian Church, activists gathered inside and outside the pension fund giant TIAA-CREF’s shareholder meeting in New York City to call attention to their holdings in private health insurance. Some members of TIAA-CREF were shocked to learn that private health insurance companies are considered part of their socially responsible investment portfolio.

Sandy Fox, psychiatric social worker from Pittsburgh, PA, received applause from the other attendees when she asked President and CEO Roger Ferguson, Jr. about these holdings:

2) NOT “dedicated to producing high-quality and safe products;” and

3) NOT “managed in an exemplary and ethical manner.”

…We come to you today to demand that you immediately divest from these ruthless companies.

Shortly before the meeting, the Campaign launched a petition to TIAA-CREF calling for them to move their money out of private health insurance receiving nearly 2000 signers in just a few days.

The Divestment Campaign for Health Care calls upon all people of conscience to shed light on the often controversial and sometimes duplicitous practices that continue in the private health insurance industry. As the Campaign’s mission statement says “We have nothing to lose. Health insurance companies have everything to lose as their stock prices drop and their influence wanes.” Go to your religious organization, your union, your pension plan, your 401k advisor, your university endowment, your city council, your friends and neighbors, and tell them it’s time to get the health insurers out!”

Unbound welcomes responses to this article, and to any of the challenges facing adequate and affordable healthcare in our country. 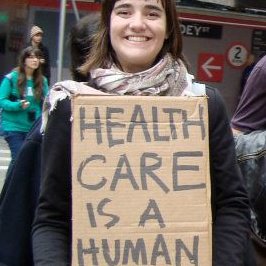 Katie Robbins is an activist with Healthcare-NOW! NYC and Healthcare for the 99%, a working group of Occupy Wall Street. She was national organizer with Healthcare-NOW! from 2008 – 2011 during the national healthcare debate. With doctors, nurses, and other advocates, she was arrested in May 2009 in the Senate Finance Committee asking for single-payer healthcare to be considered as a solution to the healthcare crisis when it was systematically ignored by policy makers. She will be attending Columbia’s Mailman School of Public Health this fall.
Share this
Tags:

Is There No Balm in Rural America?

The Nuclear Idol and the Genie of Creative Nonviolence

And the Word became flesh and lived among us, and