It may sound like the start of a joke, but the question is a legitimate one: How many Presbyterians does it take to decide to buy a new church hymnal? In reality, it is a significant decision that will wind its way through countless committees, congregation members, and Sessions. It is something that has implications related to budgets (buy early and save!), memorials (purchase hymnals in honor of loved ones), and aesthetics (which hymnal cover clashes less with our sanctuary carpeting?). The final decision will likely end up being practical – does the new hymnal include the songs the congregation loves to sing, or is it filled with selections no one knows? But for many congregations, mine among them, an important question is whether the new hymnal, Glory to God, adequately reflects the congregation’s commitment to full inclusion and social justice.

That last criterion can be difficult to judge. How does one measure the “justice” of a collection of musical works? Is it a quality found in the text itself, or perhaps in the purity of inclusive language used in articulating the texts’ themes? Is it something related to the range of cultures, histories, and theological perspectives identifiable in the hymns’ source material? Or is it something that falls under the old rubric of “we know it when we see it”?

By now, many churches have already purchased the new hymnal and are introducing it to their congregations in a variety of festive ways. Other churches are still in the decision-making process, carefully reviewing specific details about Glory to God. They have noted that about two-thirds of the previous hymnal made its way into the new version. Scanning the table of contents, several things are readily apparent. It has about 250 more selections than the 1990 hymnal, a rich sampling of pieces from the Taizé community, a handful of sacred songs and spirituals that have never before been in a Presbyterian hymnal, an intentional dispersal of the Psalm settings throughout the broader organizational categories in the book, and a wide range of hymns from the global church. That alone might be enough information to persuade (or dissuade) a congregation in its decision to buy this hymnal. But a closer review of the book yields other factors to be considered.

Scanning the index of authors, composers, and sources, it is worth noting that there are 27 listings under “African American spiritual” and 24 hymns listed after the name of noted Taizé composer, Jacques Berthier. What other composers or text writers of note are frequently present in this index? The Genevan Psalter, Fred Pratt Green (1903-2000), and Brian Wren (b. 1936) each garner 11 entries. J.S Bach and Marty Haugen (b. 1950) each have 13 entries, just barely topped by Isaac Watts, Charles Wesley, and David Gambrell (b. 1972) who each have 14. Top honors, however, fall to Mary Louise Bringle (b. 1953), the chair of the Presbyterian Committee on Congregational Song that created this hymnal (20 entries), British composer Ralph Vaughan Williams (22 entries), and American composer Alfred Fedak (b. 1953), who provided 25 harmonizations and hymn accompaniments, including the much-beloved, much-maligned choice “Here I Am, Lord” (#69). 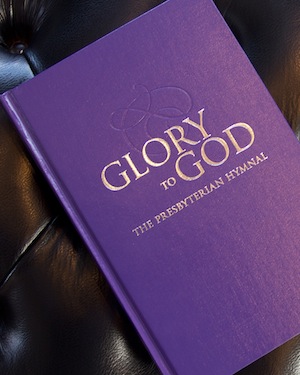 Switching to the Topical Index, the category of “Justice” (which had a meager sampling of nine hymns in the 1990 book) contains 28 selections. There is also a section of the hymnal identified as “Justice and Reconciliation” that holds another 25 hymns. Taken together, that is almost a sixfold improvement over the previous hymnal. Glancing over these works, well-known contemporary authors like Shirley Erena Murray, Fred Kaan, and Erik Routley lift up important themes related to social justice. The well-known hymn setting of Micah 6:8, “Come, Live in the Light” (#749), finally makes its way inside a Presbyterian hymnal, as does a lovely hymn called “Goodness is Stronger than Evil” (#750) with text by Bishop Desmond Tutu. And on facing pages we can chose either the familiar exhortation to “Live Into Hope” (Jane Parker Huber, 1976) (#772) or sing a relatively newer piece by John Bell (1987) that insists “Heaven Shall Not Wait” for the poor to lose their patience (#773).

Another important justice topic is how well our church liturgy reflects the changing configurations present in families, especially in same-gender households. Under the explicit category of “Family,” there are six hymns listed that show some sensitivity to this theme. For example, the second verse of David Mowbray’s “Bless All Who Trust in God” (#47) offers this prayer: “Let families be strong and sparkle bright as wine; let partners and let children thrive and flourish like the vine.” Similarly, among the ten hymns listed under the category of “Wedding,” there is a 1998 hymn called “Unseen God, Your Hand Has Guided” (#685). In this day of marriage equality, here is a wedding song that is not limited by language of male and female, of husband and wife: “Unseen God, your hand has guided these two lives on separate ways till they heard your call to travel hand in hand through all their days.”

Two interesting hymns related to the theme of global peace are displayed side by side in the section labeled “The Life of the Nations.” They each have a provocative title (“Where Armies Scourge the Countryside” (#344) and “In an Age of Twisted Values” (#345) ) that may scare off some pastors or choir directors. But their messages are important and timely. The first, whose text was composed in 1995 by Herman Stuempfle Jr., is identified as a response to a range of violent events in recent history, such as the ethnic cleansing in the Balkans, the aftermath of the Oklahoma City bombing, and sad revelations of child abuse. Even if this hymn arose from specific painful events, the plea in its final verse for God to “redeem this violent, wounding world till gentleness shall reign” is valid for all times and seasons. The second hymn, whose text by Martin Leckebusch was also composed in 1995, expressly names social sins such as greed, prejudice, racism, ageism, and moral confusion. It challenges us to stop hiding behind twisted values, distorted words, and our tendency to wander away from God’s truth. Its closing refrain asks God to “hear our cry and heal our nation,” which stands in stark counterpoint to how other, more well-known national songs uncritically offer assurances of an American manifest destiny.

In this essay, I have been extolling the strong points of the new Glory to God hymnal as a pastor and person of faith. However, having also a significant background in music, I would offer one comment about an unjust quality in how the music has been organized and printed. Flipping through the new hymnal, it is striking how many pieces are reproduced lacking both harmony and accompaniment. By my estimation, 325 of the 853 pieces in Glory to God fall into this category, while only a handful did in the prior hymnal. Clearly it was done to save space and was a seemingly easy, pragmatic choice to make for such hymns like “Morning Has Broken” (#664) or “Though I May Speak” (#693), which are intended to be sung in unison. However, not everyone can sing a hymn in the same vocal register, which is why so many hymns are written in four-part harmony. Also, many people are spiritually nurtured by hearing robust congregational singing of familiar hymns in distinct vocal parts. Visually, it is harder for people to quickly identify meter and intervals when the vocal line is printed in isolation from other parts and the accompaniment. Lastly, it is much harder and less aesthetically pleasing to play hymns at home when you are only provided with a single vocal line. Many will protest that people do not read music any more, that since much modern church music consists of texts projected onto screens, the day for four-part harmony has passed. I would respond that no one is forced to sing harmony when parts are present, but it feels unjust to deny the option of singing harmony when no parts are printed.

How do Presbyterians decide to buy a new hymnal? Honestly, it may come down to details such as cost, appearance, and whether the new volume fits in the existing pew racks in the sanctuary. For my part, I do hope church committees and Session will set aside the extra funds, select either the purple or red binding, and be pleased at how nicely Glory to God looks in their pew racks. At the same time, I am confident that their decision to purchase the new hymnal will help them discover a fresh, new resource of global, inclusive, justice-oriented hymns that will enrich their faith and worship life for years to come.

AUTHOR BIO: Randy Bush is the senior pastor at East Liberty Presbyterian Church in Pittsburgh, PA, beginning ministry there in March 2006. Before that, he served congregations in Racine, WI and in Chinhoyi, Zimbabwe. He was a piano performance major in college, studying in Kansas, Austria, and Germany, before pursuing theological study at Princeton Theological Seminary and Marquette University. He enjoys a wide range of musical styles both on Sundays and throughout the week, ranging from jazz to pop to classical music.

God or Mammon: A Short Theological Reflection on Wealth and Grace

Gendered Language and the Imago Dei