In March 1948, theologian Reinhold Niebuhr graced the cover of Time. His appearance came at the end of two decades in which Niebuhr had risen to cultural prominence not just as a religious thinker, but also as one of the country’s foremost political leaders. Mainline Protestantism was riding high, and Niebuhr felt a moral duty to use his cachet to weigh in on matters of state—to shape national policy in light of his religious convictions. He claimed, “the sad duty of politics is to establish justice in a sinful world,” and took this calling deeply to heart. In the 1930’s he was a prominent member of the Socialist Party of America, before the rise of fascism provoked a shift in political ideology. He then founded the Union for Democratic Action—a group that strongly advocated U.S. entrance into World War II. Later, he became a vocal opponent of the war in Vietnam.

His life stands in stark contrast to the political diffidence of many contemporary mainline Protestant leaders. While the religious right has crafted something of a jingoistic civic religion, stridently advancing a religious agenda through political channels, the majority of mainline Protestant churches—including many in my native Presbyterian Church (U.S.A.)—have taken an opposite tack, shying away from political and cultural conflicts. When pastors and churches address political matters, there is generally great care to couch controversial views amidst an abundance of caveats, or to confine discussion to political territory where there will be broad consensus. 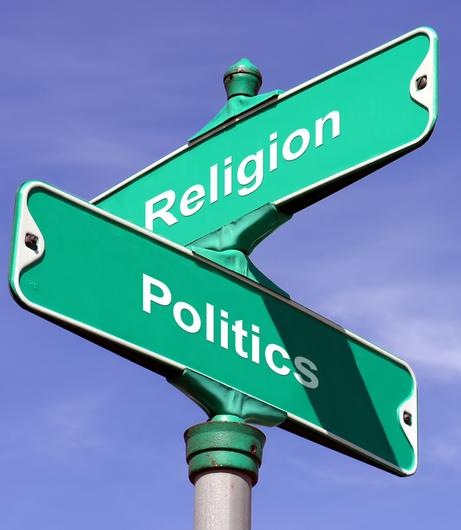 The argument that churches ought to remain apolitical as much as possible is often coupled with an assertion that the Church’s sole responsibility is to widely preach the gospel—that to wade into the muck and divisiveness of contemporary politics is to risk alienating both current congregants and potential new members. To be fair, the logic in the second half of this position is unassailable.

Our country is more politically polarized today than in any period since the Civil War. The vitriol and vehemence that routinely define public discourse make it exceedingly likely that any church’s attempt to seriously weigh in on political matters will likely reveal ideological divides between its members. People will get angry.

And yet, if we acknowledge that the Church must preach the gospel, then there is no other option than to wade into the political mess. Recent events have made one thing abundantly clear: The Church cannot pretend that politics inhabit a separate universe from matters of morality.

A Time for Choosing

When the presidential candidate for one of our major parties advocates tearing families apart by , there are moral implications. When he celebrates torture or murdering innocent civilians, we cannot pretend this speech is value-neutral. When he advocates prohibiting Muslim immigration or turning away refugees seeking asylum, this does not just call into question who we are as a nation; it calls into question who we are as Christians. If the Church pretends otherwise, it reveals that a commitment to remain apolitical has truly superseded any commitment to preaching the gospel. 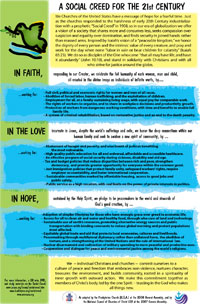 In 2008 the National Council of Churches published a Social Creed for the Twenty-First Century. The document affirms the Church’s commitment to the “enactment of policies benefiting the most vulnerable…immigration policies that protect family unity…the abolition of torture…[and] cooperation and dialogue for peace and environmental justice among the world’s religions.” It is impossible to square these aims with the current Republican platform. In this time of grave reckoning, the Church must decide to either prioritize its social creed or abdicate its calling as it watches from the sidelines. There is no third way. When the headlines every day proclaim policies that so clearly violate our professed principles, to remain silent is to become complicit. It is time for faith leaders who find Donald Trump’s views abhorrent to speak out—to repudiate them as contrary to the biblical witness—or forfeit any claim to moral relevance.

I suspect that the reticence of many churches stems from concerns about institutional viability. Membership in mainline churches has steadily declined for decades: many already struggle with empty pews and fundraising difficulties. The desire to keep the lights on, while understandable, has left many congregations inherently fearful of taking action that might further jeopardize membership rolls or stewardship drives. And yet, this defensive crouch designed to staunch the bleeding may ironically prove our ultimate undoing. Here’s the thing: There are millions of Americans—young people in particular—who have strong moral objections to Trump’s candidacy. When they see churches profess belief in equality, peace and justice—but look on silently while those values are desecrated in the public square—they will see Christianity as hypocritical and irrelevant. This moral stain will not quickly disappear.

However, if Christian leaders take this opportunity to reject political bigotry in clear and unambiguous terms, they will instead situate themselves firmly within a proud Christian tradition of proclaiming God’s call amidst the vicissitudes of political prejudice. This is the legacy to which Christians should to look for guidance. We would do well to emulate the character and conviction of faithful disciples like those who penned the Declaration of Barmen. In 1934, a group of German pastors and theologians convened, disturbed by Hitler’s rise and—perhaps even more—by the German Church’s complicity to fascism. The document they wrote clearly articulated God’s message of love, inclusivity, and justice amidst the rising tide of lethal despotism and bigotry. They saw clearly the religious mandate such times demanded, writing “precisely because we want to be and to remain faithful…we may not keep silent,” in the face of “the present Reich Church government which [is] devastating the church.” The writers remained true to Jesus’ message, instead of acting “as though the church were permitted to abandon the form of its message…to changes in prevailing ideological and political convictions.”

The Dutch Reformed Church in South Africa took a similarly courageous stand in 1986 when they wrote the Belhar Confession, which decries apartheid as an ideology that violates God’s intentions. Speaking from their faith in Christ, the one who renders moot all earthly divisions, they firmly rejected “the forced separation of people on the grounds of race and color,” as anathema to a just and loving God. The conviction underlying both the Belhar Confession and Declaration of Barmen—that the Church has a moral obligation to speak out against political evil—remains as true now as it ever was.

Those who fear that entering the political fray in such volatile times risks tearing the Church asunder should take solace in the cultural reception to the Christian leaders who are forcefully rejecting rising intolerance. One such prophet is Rev. William Barber II, the North Carolina minister who started the Moral Mondays movement, in which people of faith convened weekly at the state capital to protest political injustice. The protests he started have become a rallying point for those who seek to make political conventions reflect moral convictions—calling to end poverty, reject discrimination, and fight efforts to disenfranchise the vulnerable and oppressed. When people ask me where faith is alive, vibrant, and active, this movement is invariably one of the places to which I point. Congregations worried about denominational decline should emulate their example, taking concrete and visible action to advance their moral convictions in the public square.

But, ultimately, increasing the viability of our congregational bodies should not be the reason people of faith feel compelled to demonstrate against the bigotry and violence of the Trump campaign. We ought to speak out against these frightening changes to our body politic, instead, because they so clearly violate our most cherished values. Protecting the poor and vulnerable, advocating nonviolent solutions, fighting racial prejudice—these are first and foremost moral concerns. If churches cannot come together to reject a candidate so clearly opposed to them, then we are facing problems that run far deeper than membership decline.

Elections 2016: What our (Dis)trust in Candidates Means for the Church

Christ, Culture, and a Broken Democracy