Confessions of a Reconciling and Reluctant Christian

Never did I think I would be excited about parliamentary procedure, church polity, and Robert’s Rules of Order—boring, right? And yet, as a Presbyterian Peace Fellowship intern at this year’s PC(USA) General Assembly, “Robert” ruled the day. I saw people use parliamentary procedure to bring down critical justice overtures, silencing debate and the majority reports on both marriage equality and divestment in the occupation of Palestine. But I also witnessed the strategic use of that same procedure to turn the tide against for-profit, private prisons, and to create a more inclusive, self-correcting process.

I’m not sure how I feel about parliamentary tactics determining this church’s commitment to justice and the Gospel. But what I do know is that, when it comes to Robert’s Rules, you should never count out the possibility of the Holy Spirit.

And I don’t say this as a “decently and in order” Presbyterian lifer. Though I’m a “Ruling Elder” at a union church of Presbyterians and Methodists, I’ve never considered myself much of a “Presbyterian,” but the chance to engage the church in questioning the status quo and advocating for a more equal, just, and peaceable church, denominational or not, has been heavy on my heart for a few years now.

Reconciling and Reluctant
After a falling out with “organized” religion when I was a teen, due to some heavy scandals in my home church, I swore that church politics were the tool of everything that was wrong with the church. I had seen it condemn instead of welcome, push away instead of invite, manipulate instead of be transparent, continually spend money on buildings rather than share with those in need. I was convinced that any time church people got together, more of the same old thing was guaranteed.

My reconciliation began to take hold the first day I walked into the church I now serve, Hot Metal Bridge Faith Community located in Pittsburgh (that was 7 years ago). It was a brand new church at the time, with about 30 members. Without hesitation, they welcomed me, along with some ragtag friends, with open arms. They didn’t interrogate us on whether we were truly saved or not. We were pierced, tattooed, and decked out with tattered clothing—so it was pretty much assumed that we were on the right path.

In fact, without having to “prove” ourselves, we were encouraged to participate to whatever capacity we desired and they had need. Before we knew it, we were helping with music, drama, sharing our story, and serving in anything we could get our hands on. As our church grew in people and experience, I saw something radically different from the churches I had known: trusting, transparent, and invitational participation and leadership.

When I was asked 3 years ago to join the “Elders” on Council, I was still dealing with the bitterness I held towards church politics and leadership. I wrestled with what I had previously thought and what I was currently a part of, and was faced with a dilemma. I had told my pastors I needed a solid month to discern how I felt. They came a week later and told me jokingly that I didn’t have a choice other than yes, so I took them seriously and reluctantly gave it a shot. It has been one of the greatest decisions I have made, for I have found myself on the most beautiful journey of reconciliation in Christ’s body.

Conspiring with “Robert”
So, with this new opportunity with the Peace Fellowship at the GA here in Pittsburgh, I found myself working in another kind of church political sphere. I was working as a “committee liaison” on the committee for Social Justice Issues. Since I was not an elected commissioner, I did not have a vote at GA, but I could participate as an observer and organizer. We had a full docket of proposals and overtures on topics that I, and my co-conspirators, found very valuable and important: the Occupy movement, the housing crisis, economic injustice, racial ethnic concerns on incarceration, the Environmental Protection Agency (EPA) and water issues, and workers’ rights, with actions and educational materials to follow. We saw some small but loud oppositional arguments with tactics of misdirection and confusion. But, with few amendments, the docket was passed with overwhelming support.

The only exception was an overture calling on the PC(USA) not to invest its money in for-profit prisons. It was not “approved”, not “referred” for more study, and then just barely “disapproved” by a 25 to 23 vote. After the confusion and eventual disapproval ended our meeting for the evening, it was time to work overtime. We conspired, in a discussion with supportive voting commissioners, to overturn the disapproval. According to Robert’s Rules, we had two options: either submit a “minority report” to be discussed on the floor of GA during “plenary”, or find a commissioner, who had spoken in favor of disapproval, and persuade him or her to “reconsider” the disapproval motion in committee. Due to the notes taken by us observers, we were able to locate a commissioner who might be our ally. After an open and honest conversation the next morning, he moved for reconsideration of the overture. The motion needed and achieved a 2/3 vote in support.

A TSAD (theological student advisory delegate) then motioned to delay the discussion and voting till after lunch so that supportive persons could compile their thoughts and make a better presentation; the motion was passed, and that’s exactly what happened. With a couple commissioners, a group of about 6 TSADs, YAADs (young adult advisory delegate), the “Overture Advocate”, and a few of us co-conspirator observers we sat through the hour and a half lunch break to do some serious overturning. With lots of prayer, a food run, laughing, and seriousness, we all collaborated in such a beautiful way that the revised overture came to embody, in its participatory process, the same justice sought in its outcomes.

After lunch, it was time to make the move. A young man of color, who hadn’t spoke on the committee floor yet, rose to speak, and eloquently articulated the new motion. The floor was opened for opposition. The room fell silent as no word rose against it; it was time to vote. After tallying up the hands in support and opposition, the count came to 40 in favor, 9 against. The new motion passes! One of the commissioners who helped spearhead the reconsideration rose to speak after the motion passed. He started to address the committee and observers, though choked with tears. He made note that this couldn’t have passed without the amazing teamwork and enthusiasm from the passionate TSADs and YAADs. “This is the future of our church, and it gives me so much hope,” spoke the commissioner, as a loud applause resounded in the room. Sitting next to a fellow Peace Fellowship worker and the Overture Advocate, we all couldn’t fight the tears of joy as we saw the beauty of the young people who will lead our churches in years to come, full of passion for justice and equality in our church and the world in which we must interact. Praise be to the homeless, criminal, suffering servant, in which we follow, Jesus Christ!

The Progress of Hope
It doesn’t always turn out with tears of joy. The following day, I cried tears of sorrow as our church failed to take a strong stand against the apartheid occupation of Palestinian land by the State of Israel, by choosing not to divest from American companies profiting from the occupation, companies in which the PC(USA) has invested stock in pensions/ 401(k)s. The same parliamentary procedure that had helped foster a newly inclusive and creative conversation around divestment from privatized prisons was now being used to undermine conversation and thorough understanding.

Despite the lack and delay of progress and action on some of the issues I care about, I still have hope. I got to see for the first time the gears of the modern church in action. There was a time when I never thought I would engage in the inner-workings of the institutional church, but I’ve seen beauty despite its failures. There are forks and grease in these gears, and I no longer believe the systems we use are inherently wrong, but, to echo one of my favorite theologians, the late Walter Wink: these systems are fallen, just as we are, and they need healed, as do we.

We need to engage the “Powers that be” in order to reconcile them. The church can be a “Power that be” if it aligns itself with empire and privilege. But it can also be the prophetic witness of the Kingdom of God on earth, as it is in heaven; where the lame walk, the blind see, and the captives are set free. We are making progress. So it is with this hope and enduring love for the church that we must slowly, painfully remove the forks, which hinder, and add the grease of the Spirit to these gears. Robert’s Rules—that “decently and in order proclivity of Presbyterians—can be either the fork or the grease. I’ve seen it be both. But if the wheels are to start moving, we first have to step into the machine. Only there, within, can we invite resurrection.

Get Involved with Presbyterian Peace Fellowship 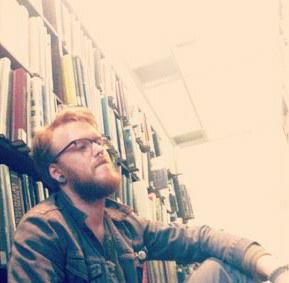 Dylan is an ordained Presbyterian Ruling Elder (2009) and an elected Methodist Lay Equalizer (2010) at Hot Metal Bridge Faith Community; an Edinboro State University Applied Media Arts degree drop-out (2004); and a person who tries to disregard titles and labels (2011-present). His passions are communal and simple living: the ecumenical unity of all believers; creating art and music; non-violent peace activism; hospitality to all; riding his bike everywhere; and learning to fix things. He currently resides in the neighborhood of Hazelwood in Pittsburgh, co-founding a new catholic worker house called the Greenway Community House of Hospitality. For more rants and art go to www.DylanRooke.com.
Share this
Tags: