Before I traveled to the Oceti Sakowin camp, I viewed the events unfolding on the Standing Rock Reservation in North Dakota primarily as an environmental protest. This is largely the frame used by the media: people trying to protect their water from contamination. This portrayal isn’t untrue, but it misses an essential element.

From the moment I arrived in Standing Rock, I was enveloped in the camp’s ubiquitous spirituality—present everywhere from vigils confronting militarized police to the quotidian acts of daily living. Each day starts in prayer. Before sunrise, an elder awakens the camp with a lengthy invocation broadcast over the PA system. As people arise, many congregate around sacred fires and burn offerings of sage, tobacco, and other herbs to communicate with their Creator. From our very first orientation, we were instructed repeatedly to infuse all work we did with a spirit of mindfulness and love. Camp rules prohibit the consumption of drugs and alcohol to keep the body pure, and this focus on purity also extends to thought and language: Swearing is disallowed, and all present are encouraged to relinquish feelings of anger, resentment, and discord. The result is a community that, while certainly not immune from the interpersonal difficulties present in any gathering of people, radiates a peaceful, loving, and communal energy.

The gathering’s context makes this spirit of unity and harmony all the more impressive. The indigenous people of the Standing Rock reservation and their allies are taking a desperate stand against the Dakota Access Pipeline (DAPL) that will endanger their water, and whose construction will damage places of deep spiritual significance. Their commitment pits them as David, struggling against a modern-day Goliath. Energy Transfer Partners—the company constructing the pipeline—has near-limitless resources, substantial political influence, and both private security and public law enforcement at their disposal. The fact that the pipeline travels through land established as sovereign Sioux territory by the 1851 Treaty of Fort Laramie means little in a state whose governor counts oil companies among his top donors and who strongly prioritizes expediting oil and gas extraction. In the face of these steep odds, as well as the recent onset of the harsh North Dakota winter, the Standing Rock water protectors ground their resistance in deep, abiding love.

The night before we arrived, police officers sprayed peaceful demonstrators with fire hoses in 15 degree weather. One woman suffered extreme damage to her arm from a concussion grenade. Others were shot with rubber bullets. 17 people were hospitalized, many for hypothermia. When we got there, the mood at camp was understandably somber, stunned—though perhaps unsurprised—by police violence and aggression. In the midst of this discontent, I attended a prayer service. An elder got up to speak, and her words shocked me: lamentations and fervent prayers for peace. Where I would expect to find anger at state-sanctioned violence, I heard pleas for compassion and love. She cautioned us against the danger of holding hatred in our hearts, exhorting the camp to forgive their “relatives” in uniform; she offered prayers on the officers’ behalf, begging the Creator to open their eyes and soften their hearts. 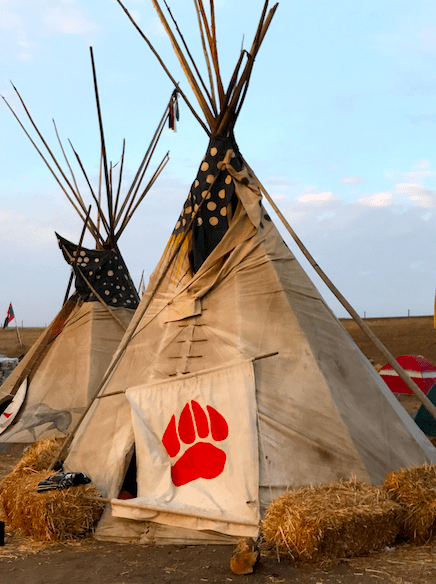 I grew up attending church every Sunday. I spent three years in seminary, surrounded by aspiring faith leaders and enveloped in the school’s liturgical rhythms. I’ve worked in churches. And yet in all my time in various Christian communities, I have never seen anyone so embody Jesus’ call to “love your enemies, and pray for those who persecute you” as I did in this prayer service. And it wasn’t just dramatic moments like this; the oceanic feeling that flows through the camp’s rituals, large and small, is both undeniable and overpowering. All of this heightens the absurdity that, in a real and functional sense, the US government and our broader culture does not afford indigenous worship the same respect and protection it provides to other faith traditions.

The past few years have witnessed a spate of legislative activism drafted to safeguard the beliefs and practices of (predominately conservative) Christians. Since the Supreme Court ruling in Obergefell v. Hodges, several Christians have protested being asked to provide goods or services for same-sex marriages. State governments have been quick to pass laws intended to address their concerns. Indiana, for example, introduced the Indiana Religious Freedom Restoration Act, which protects any citizen or corporation’s right to refuse providing goods or services if doing so would violate their conscience. (Many other states have followed suit.) While such ardent defense of religious freedom is generally reserved for Christians, cultural concern extends, to a lesser degree, to practitioners of the other Abrahamic faiths. Most people are justifiably horrified when a swastika is painted on the walls of a synagogue or when arsonists attack a mosque. Perhaps because these forms of worship are more readily recognizable to a majority-Christian country, their desecration meets with vociferous opposition. Unfortunately, the same cannot be said regarding indigenous religion.

Disregard for the Faithful

On Thanksgiving, a group of police stationed themselves on top of a large hill overlooking the camp. This particular hill is recognized by the Sioux as an ancestral burial ground. For people whose prayers almost always invoke the spirits of their ancestors, the spiritual anguish of watching militarized police vehicles park on top of their forbearers graves must have been unimaginable. A large group subsequently went to confront the police. In the video below, you can hear people pleading, “Remove yourself from the graves of our ancestors…We are here with love. We are here with peace. We are here with respect.” These supplications met with steely disregard, and the next day police laid razor wire around and on top of the burial mound.

Imagine for a moment that citizens citizens of a Christian town were engaged in peaceful protest, and in response police officers surrounded their church with razor wire so that no one in the town could congregate there. There would be widespread outrage! Instead, this was treated by media as just another day in the DAPL standoff.

Indeed, this disregard for indigenous religious concerns is endemic to the conflict. The tribe’s legal complaint repeatedly cites religious objections to the pipeline’s construction. The DAPL, the document says, would “destroy sites of great historic, religious, and cultural significance.” The tribe also expresses that it is, “greatly concerned with the possibility of oil spills and leaks from the pipeline should it be constructed and operated, particularly into waters that are of considerable economic, religious, and cultural importance to the Tribe,” adding that, “the religious significance of these waters cannot be overstated.” Whereas elsewhere (bakeries in Indiana, to name one example) Christians’ religious convictions are deemed inviolable, here indigenous faith is treated as less important than the financial gains of oil extraction.

Disregard for indigenous religion is nothing new. Colonists largely viewed Native Americans as pagan, potential Christian converts at best and savages at worst. In 1728, tobacco farmer William Byrd voiced this paternalism, gravely writing of his intentions for, “converting these poor infidels and reclaiming them from their barbarity.” The subsequent history of genocide, removal, and persecution was made possible, in part, because indigenous people were portrayed as godless heathens: Andrew Jackson said, in defense of removing the Southern tribes, that they have neither, “the moral habits, nor the desire of improvement which are essential to any favorable change in their condition.” In the late 19th and early 20th centuries, boarding schools were established that removed indigenous children from their homes, sometimes forcibly, in an attempt to westernize them. The schools often featured religious instruction—some were even run by missionaries—and students were subject to discipline for practicing traditional religious customs. Construction of the DAPL is but the latest iteration of disregard for indigenous faith.

Throughout our nation’s history, the constitutional promise to freedom of religion has truly meant freedom of Judeo-Christian religion, protection that is rarely extended to faiths that fall outside those readily identifiable confines. And that’s unconscionable. If religious freedom is to mean anything, it must be universal. The devout community at Standing Rock stands as testament to indigenous piety. Even in colonial times, people who bothered to spend time learning and understanding native religious customs remarked upon their profundity. In 1700, Francis Daniel Pastorious noted how the native people he encountered, “strive after a sincere honesty, hold strictly to their promises, cheat and injure no one. They willingly give shelter to others and are both useful and loyal to their guests.”

“I thought to myself,” Pastorious wrote, “these savages have never in their lives heard the teaching of Jesus concerning temperance and contentment, yet they far excel the Christians in carrying it out.”

“Water is Life”: A Spiritual Declaration

To outside observers, the conflict at Standing Rock is largely framed as an environmental protest: native people speaking out against oil companies’ exploitative practices. While it certainly is that, the people who began this movement view Standing Rock as first and foremost a spiritual protest.

When I spoke with Ramón Reyes—a man of Mayan, Incan, Kickapoo, and Anishinaabe heritage—he framed the conflict as one between money and the bountiful gifts of his Creator:

“There is no value in paper. You use it to start fires, to make paper maché. But if you give me fur I can stay warm. If you give me meat, my belly can stay full. What we see in this pipeline is false power. A false idol. These people believe in a greenback and they come here to destroy our lands, for money. We do this because it comes from our heart. No one pays us to be cold, or hungry, or to stay up all night. I stay up all night and I’m hungry and I’m cold because my Mother needs me, and my Father needs me. And they call upon me and I came to their call. That’s the difference between warriors and soldiers.”

If our government dismisses the legitimacy of these spiritual concerns, it reveals religious freedom to be little more than a shield for codifying Christian belief into law. It’s never too late, however, to truly live into the Constitution’s promise to protect the freedom of all people to worship in peace. Listen to those who cry out on behalf of their Creator. Respect their sacred waters. Do not disturb their ancestors’ rest.

NOTE: In the time since this article was written, the Army Corps of Engineers denied a permit for the section of pipeline that would run through Standing Rock. While this is certainly welcome news, it is does not negate the incredible lengths to which the tribe was forced to go in order for their voices to be heard. It should not take thousands camping out for months, and enduring egregious police violence, to engender respect for their basic safety and religious freedom. It should not take a cadre of veterans joining the camp for our government to recognize the severity of the situation. Moreover, the response from Energy Transfer Partners makes clear their disdain for the Army Corps’ decision, and signals their intention to wait for more favorable treatment under a Trump administration. This fight is just beginning.

“Children are dying”: Climate Crisis and the Rivers of Babylon

As Close as our Very Breath

10 "Swamps" Where Christians Must Take Action

I have been asked to reflect upon extinction. First,