The tragedy of my educational history is not that in some middle school classroom, the twin pressures of puberty and a plummeting self-esteem finally forced me into silence. The tragedy is that no one noticed.

Quiet boys are strange. When a boy goes quiet, people notice—and unless he has a good reason, like grief, or anger, or sulkiness—he gets branded as weird.

But quiet girls are just fine. Appreciated, even. No need to figure out why a girl is quiet—that’s just how some girls are. And maybe even how they’re supposed to be.

I learned, when I did speak up in class, that I left with a feeling of guilt. What if I’d spoken too much? What if someone else—someone smarter, someone better—hadn’t had a chance?

After high school, I headed to Sweet Briar College in Virginia, a small, liberal arts, women’s college. Unlike most of my classmates, I had actually chosen a women’s college on purpose.

You see, I am the latest in a long line of women’s college graduates—Sweet Briar graduates, actually, stretching back to my great-grandmother, who entered the college in 1919. I had been brought up knowing that the fabulous women of my family, with their strength and intelligence and generosity, were the products of a women’s college. While most of my first-year classmates chose Sweet Briar despite the fact that it was a single-gender institution, I was actually excited for it. I’d not only heard the promises of the benefits of a women’s college education; I’d seen them lived out.

I’d seen my mother pick out a fellow women’s college graduate from across the room by the way she held herself, or introduced herself, or even the way she paid attention when someone else was speaking. “She walks into the room like it matters that she’s there,” my mother would say. “Not that she’s the best, or most important, or ‘all that.’ But that her presence matters.”

Confidence. Passion. Success. These were the promises tucked into my acceptance letter.

Yet there was a part of me, the part that truly believed invisibility was the noblest choice, that I just wasn’t leadership material, that didn’t think the much-touted women’s college transformation would work on me. I believed I would get a wonderful education, sure, but nothing deeper—I couldn’t really expect a miracle, could I?

At first, I went about my classes at Sweet Briar much the same way I had gone about my classes in high school—learning as much as I could as quietly as I could. I loved the new things I was learning, but always, always, if the choice came down to learning something more or staying invisible, I chose invisibility. 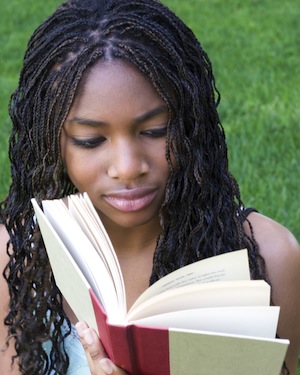 We had been studying the Oresteia in my class on Ancient Greece, and I had dutifully kept notes of all my thoughts and theories so I could put them into a paper and hand them discreetly to my professor (discreet, after all, being a word that gets said approvingly of girls). After class, my professor pulled me aside to ask if I would consider speaking up more during discussions. “You’re clearly keeping up with the material,” he said. “I think the class would benefit from what you have to say.”

Much of my first year of college has been lost, perhaps mercifully, to the haze of time. But I can remember that moment in stunning clarity—my professor, with his favorite Gore-Tex jacket and a dozen books tucked precariously under his arm, the light buzz of female voices all around me, the fading yellow walls of Benedict Hall, where generations of women had learned their voice mattered. As I just had.

But that day, my professor taught me that my silence was not the best I had to offer. I realized that by keeping silent, I might be withholding something valuable from the world.

It wasn’t easy at first. I still felt that lingering guilt of taking up someone else’s space. But as I kept at it, this learning-out-loud gig, I noticed the true miracle—not just that I was speaking, but that others were speaking, too. When I joined the ongoing conversation to share a theory, someone else would run with it, and when she ran out of ideas someone else would start in, and soon the whole class was throwing out questions and responses. I discovered that speaking up, when done thoughtfully, doesn’t take anyone’s space away. It makes space for that next voice, preparing a place of invitation in the conversation.

I am grateful for the many women throughout history who have fought to be heard so that they might make space for the voices of other women. And I have found that the best way to show my gratitude is to speak up in my turn, always leaving room for the next person.

I found the courage to claim my voice at a women’s college. I found it by listening to my peers, fabulous women who approached life with confidence, intelligence, and humor. I found it by discovering that being truly passionate about something makes it impossible not to speak out. I found it by being listened to, and by learning how to listen. Ultimately, I found the courage to claim my voice by learning that I mattered—not just because of what I knew, what knowledge I could impart—but because of who I was. My passions, my gifts, my sticking points, my emotions—all of it mattered.

It is true that in America, women are quickly closing the gender gap in education, at least in terms of sheer numbers. In fact, at many schools, women now outnumber men. But simply corralling women (or men) through the educational process in order to hand them a diploma is different from showing women (or men) that they matter.

As many strides as we have made over the last hundred years or so, the overwhelming message to women in most parts of the American educational system is still that we don’t matter—or at least, that we shouldn’t think that we matter. Sometimes the message is unmistakable—what says “women don’t matter” louder than a campus culture that tolerates rape and forces women to live in fear? Sometimes the message is much quieter—the way male students get called on more often, and listened to more carefully, or the way women are discouraged from pursuing their passion in STEM-related fields, or the way women’s brilliance is relentlessly paired with women’s beauty, as if that’s the only thing that makes it palatable. Maybe we allow women to matter once they succeed. But we don’t expect them to succeed because they matter.

There are plenty of statistics on how women’s college graduates are more successful than their coed peers, how they make up far greater percentages of congress members and CEOs and college presidents, how they create a network of sisters willing to go to bat for each other. Ultimately, though, what undergirds all these statistics of success and satisfaction is a women’s college graduate’s sense that she matters. Her presence in the room matters. Her presence in the world matters.

Ideally, this would be the message at every school—from preschool to Sunday school to homeschooling to high school to college and trade school and university and beyond—and I will not claim that no school other than women’s colleges manages to instill a sense of worth in its students.

What I will claim is that women’s colleges do it well, and have been doing it, in some cases, for hundreds of years.

If you are where I was—keeping your silence because somehow you’ve been taught that nothing you do or say or are really matters in the end—I encourage you to find a community that pours all its energy into telling you otherwise. Once you find it, take a deep breath, and speak up.

To paraphrase my professor, the world will benefit from what you have to say.

Postscript: In between the time I submitted this article and it went to publication, Sweet Briar announced that it would be closing at the end of this school year due to financial difficulties caused by the diminishing interest in liberal arts women’s college education. Amidst the shock and grief of this week, I have heard one refrain repeated over and over again: “This was the place I learned I mattered.” Women’s colleges are vital in the fight for gender equality, and I urge you to support them in any way possible. I also charge you to help save Sweet Briar’s legacy by encouraging the young women you know to own their intelligence, their courage, their voices, and their worth.

AUTHOR BIO: Carol Ferguson is a third-year student at Union Presbyterian Seminary in Richmond, Virginia, currently serving full-time as the Intern Minister at First Presbyterian Church in Henderson, NC. She graduated from Sweet Briar College in 2012 with one major, three minors, and a passion for women’s education.

Read more articles in the “Strategies and Solutions” section!

Into the Words...Recalling Our History