Dear brothers and sisters, we have seen a lot of violence in the past few weeks. We’ve seen terror attacks at the Belgium Airport and at Ataturk Airport in Istanbul, a major bombing in Iraq, and a bombing in Medina – the holiest of place for our Muslim brothers and sisters during a holy time of their year, Ramadan.

We saw many lives lost at a senseless act of violence in Orlando at the Pulse night club.

Many of you may have seen the graphic and horrific videos circulating on social media and in major news outlets that captured both the murders of Alton Sterling in Baton Rouge and Philando Castile in St. Paul. As the murder of Alton Sterling was unfolding, my spouse Joe reminded me that this is the 116th murder of a black person by law enforcement in 2016 alone.

The black American man or woman having his/her live taken by law enforcement is becoming far too common of a story. It still shocks me personally every time I hear of a murder. But looking at the numbers and the stories that dominate our headlines, it starts to become just another day in America.

I get angry and sad and overwhelmed by what is going on. I could go on and on about the countless ways that hate and brokenness have taken over our world, robbing people of their lives and dreams and robbing other people of their loved ones. But I’m called to preach the Gospel to you today, and we are all called to live it. And so it is in this broken, blood-stained context of our world today that we as Christians are called to love one another, to love one another so visibly that the world will know we are God’s children by our love.

So how do we show that kind of love? What are some ways we show love – to one another in our congregations, to our neighbors in our communities, and to the world?

To start with, we can give people rides to church, serve meals to the homeless, donate money to charity. There are lots of ways to show compassion and mercy by lending a helping hand, even going out of our way to serve people who are in need.

But today, I want us to think about loving others in the context of the terror that is happening in our world, both at home and abroad. Think for a moment of this context for our African American neighbors and our Muslim neighbors who live every day with trauma of racism and Islamophobia. Think of the context in which Americans – who claim to be Christians, no less – are the cops killing innocent black men and the ones and inciting hate speech again Muslims and sending death threats to mosques.

This, brothers and sisters, is the context of our church life today. And it is the context in which we are called to read the writer of first John’s commandment to “…love, not in word or speech, but in truth and action”.

In this context, love can’t stop at sharing another meal with someone in need. It can’t even stop at showing up to a protest. We are called to do more.

I mulled all weekend long about practical ways that we can love, not in word or speech but in truth and action. In doing so, I came across a Washington Post article that has greatly influenced my thinking, particularly in light of the state of black lives in America.

First, I was reminded that being an ally is a verb. Many of us consider ourselves supporters of racial justice who are fighting racism. Many of us care about gun control and the senseless criminalization of black lives. We read up on issues, sign all the petitions, and we call ourselves allies.

But what I’m coming to realize is that many people think of being an ally as a noun – a label. It’s a way to identify ourselves. As in, “I’m a mom, I’m a Chicagoan, and I’m an ally in the fight against racism.” However, I want to challenge us to think of how we can live into the verb of being an ally rather than stopping, self-satisfied, with the noun. This is what our faith calls us to: to love in truth and action, not just in word and speech.

So what are some ways that you or I can be an ally?

We can start with our families. I often find it hardest to talk to blood-related people about anything on which we disagree or that may cause conflict. And I think God knows that. Maybe that’s why Jesus specifically tells his disciples to be his witnesses “in Jerusalem, and in all Judea and Samaria, and to the ends of the earth”. When I think about being Jesus’ witness, I think about being a witness to the Jesus who healed lepers, who called the Samaritan the good neighbor, who was constantly going against the status quo to expose corruption and hypocrisy and to liberate people from humanly created forms of oppression. 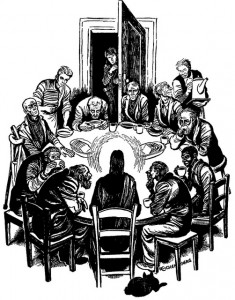 That’s what I think about when I hear Jesus say “be my witness”. When I hear Jesus specifying Jerusalem, all of Judea and Samaria, and the ends of the earth, I hear Jesus telling us something about proximity. Jesus spoke those words in Jerusalem. In essence, he was saying, “Start by being my witness in your hometown. Only then should you take it further – to your city, state, country, neighboring country, and so on.”

We often find it easier to be witnesses to Jesus’ radical life to fellow Presbyterians, to those like us who care about social justice. The last place we want to talk about Jesus’ message is around a dinner table. We think about “crazy racist uncle” who is always on some new rant. And we know it’s especially taboo to bring up tense subjects at Thanksgiving or Christmas. “Can’t we just all get along?”

But the truth is, if we listen to family disparage people of color while we can’t politely eat our turkey and cranberries, we are ignoring Jesus’ calling. When someone mentions how uncomfortable they were that TSA “allowed Muslims on their flight”, when relatives begin racist jokes by saying, “I know this isn’t politically correct, but…” we cannot default to what is considered “polite”. We are called to be Jesus’ witnesses in Jerusalem first. And for many of us, our Jerusalem may be our Thanksgiving and Christmas meals.

2.) Prepare to Change Our Own Lives

As allies we have to redirect resources and use our privilege to get out of the way. Dismantling an entrenched system like racism will take all of us experiencing discomfort and inconvenience – to say the least. This is simply the nature of justice work. We won’t end racism if we march one afternoon and continue to bask in our privilege expecting the rest of the week. The nature of our very lives need to change. We have to be introspective about how we directly or indirectly benefit from the privilege of our skin color. 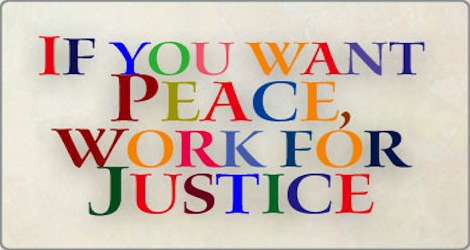 I think that the political and religious leaders of Jesus time understood this, perhaps better than we do. They realized that if they let Jesus keep going, their lives were going to become really uncomfortable and inconvenient – and really quickly! Jesus breaking the Sabbath law to heal people? The audacity! Jesus painting a not so favorable picture of the religious leaders in the Good Samaritan story! How dare he! If people really got behind Jesus’ vision, life as these political and religious leaders knew it was going to be radically different.

When people living in oppression fight for liberation and justice and succeed, we need to expect our lives to change. We have to recognize and own our privilege, whatever form it may take: our skin color, our socio-economic status, even our religion. How else can we truly be authentic and sincere in the fight for justice? When we own our privilege, we acknowledge that “justice for all” means things are going to change for us.

We have to stop saying “All Lives Matter”.

Of course Jesus loves everyone, even to the point of dying for our sins. But Jesus went out of his way to intentionally help specific groups of people — the alienated, the mistreated, and those facing injustice.

So saying “Black Lives Matter” and participating in a movement seeking justice, positive reform, and empowerment is one of the most Christ-like things we can do. Black Lives Matter. And, in light of these few weeks, I would add: Muslim Lives Matter.

The three things I just named may things you already do, and if so, thank you. For all of us, I hope that these suggestions can help us in some small way feel less overwhelmed and immobilized by all the pain that is happening in our world and start rolling up our sleeves to do our part.

All I know to do is to show up and stand on the side of love – love that is not just word and speech, but is truth and action. We as Christians can no longer be mere bystanders to the tragedy that is occurring around us.

I am proud of our denomination’s decision to add the Confession of Belhar to our Book of Confessions at our recent General Assembly. The Belhar Confession is a Christian statement of belief originally written in Afrikaans in 1982. It was adopted (after a slight adjustment) as a confession of faith by the Dutch Reformed Mission Church (DRMC) in South Africa in 1986 during the Apartheid, a systemic form of racism practiced by the White Dutch to oppress Africans. I want to share a part that seems most appropriate to confess together, in light of the state of black, brown, and Muslim lives in our country:

We, the Presbyterian Church (U.S.A.) profess that we truly believe that God is on the side of the oppressed. And so must we, if we follow such a God as the God revealed in Jesus Christ.

Brothers and sisters, the time to act is now. Our world is breaking open; our world needs love. It needs love in truth and action. It is my prayer that all of us will go out bearing witness to the liberating love of Jesus who dared to say – and through the Church his body, dares still to say: “Black Lives Matter.” “Muslim Lives Matter.” Amen.

AUTHOR BIO: Rev. Sung Yeon Choimorrow is the Director of Strategic Partnerships at Interfaith Worker Justice where she directs the organization’s solidarity work on worker campaigns. She is an teaching elder and a member of the Chicago Presbytery and lives on the north side of Chicago with her spouse Joe and their daughter Ella.

Through the Lens of Belhar

From Palestine to Portland