More than five years ago, I helped conduct an exercise with a large, diverse group of public transportation drivers. Each participant was given the same set of cards with one word typed clearly on each. They read: Asian, Middle Eastern, African-American, Hispanic,  – etc. The group was instructed to listen to a statement being read aloud. After hearing that statement, the participants were told to hold up one card with the word that best describes what they heard.

My partner instructor read the statements aloud. Each sentence was filled with descriptors, such as:

In fact, all of the descriptors were varied word choices strung together to make what we commonly refer to as stereotypes.

During the exercise, 99% of the individuals held up cards with the same word choice for each stereotype. It was interesting to note that 1% of the participants chose not to hold up any card out of defiance for the exercise. They reported back that by participating in this activity, it felt too offensive, racist and real. 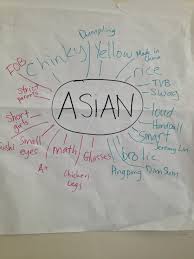 After the game was finished, we asked if there were any groups not represented in the cards. One woman raised her hand and shouted, “Where’s the card for all the white people?” When asked what descriptors or stereotypes would cause them to hold up this card, many participants didn’t know what to say.

In fact, many of the participants who were white looked at each other for a few minutes, unsure of why it took a while to think of anything.  Many of the people of color seemed to wait on edge, curious to know what might be said.

“Trailer Park Trash!” came out of one older woman’s mouth. Then, “Racist?” was thrown into the middle of the room, almost said rhetorically, but quickly followed up with, “But we’re all racist…so…that’s not true.”

I was able to repeat this exercise multiple times with groups of different ages and professions. It is worth noting that the amount of time it took for the participants to hear the descriptors and locate the associated card was less than 3-5 seconds. In fact, most individuals started flipping through the cards well before my partner completed the sentence, indicating they had the group identified from the first words of the description.

Why is this important? This exercise was designed to help individuals develop a conscious recognition of their unconscious cognitive bias – their human tendency to make systemic decisions in a certain circumstance based on cognitive factors rather than evidence.

While most participants laughed at how easily they were able to connect their stereotypes to the word cards, they often became equally embarrassed. As we unpacked the exercise a bit further, it became apparent that this stereotyping, as innocent as it may have been in the moment, actually leads to trouble very quickly in the real world.

While one might argue that individuals have the ‘right’ to hold their own biases and prejudices toward or against a certain group of people, it becomes extremely problematic when those individuals also hold positions of power. For example, one gentleman claimed embarrassment at having to hold up his card during the exercise, yet he shared that as a driver, when a black person walks onto his bus, he automatically starts to expect a fight. He continued that if and when arguments arise on the bus, he must make snap and quick decisions about who gets to stay and who gets to go. In a position where decisions about individuals must be made under pressure, it is easy to let unchecked hidden bias replace and/or color the facts.

Another woman mentioned that she was from a different geographic area than some of her colleagues. She said she interacted with individuals of diverse backgrounds on an everyday basis, and she felt this type of exercise didn’t take that into account. But when we asked for a show of hands, over ¾ of the room represented diverse parts of the US. This conclusion led us to explain that even though our group contained people of different ages, various geographic locations, and varying levels of experience with people of racial/ethnic backgrounds, the fact that everyone could still so quickly match the stereotype with the racial/ethnic group indicates that a common language pervades our assumptions.

What then, is our common messenger? How is it that so many people can share a common set of stereotypes – despite such diversity in background, education, upbringing, experiences, and beliefs?  Some of the groups blamed social media for their brainwashing. Others said it was the fear of the ‘other,’ even though they knew in their heads that people were people. One gentleman said that his parents taught him that blacks were not to be talked to, and everything after that just made sense.

To take it one step further, I conducted training with key leaders of a city that is predominately and historically white. They asked me to work with their stakeholders around becoming more diverse and easing the racial tensions that came after some recent incidents. I asked them four basic questions. The top two were:

After discussing these questions, I showed them the ugly photo of the famous ‘Strange Fruit’ lynching tree from back when racism was overt and out in the open for everyone to see. Whenever I share this photo, I get squeamish looks and sometimes even angry responses for hauling such offensiveness back out in the open.

I shared that the seed to the “strange fruit” of this tree, begins with our hidden bias, the prejudices that we carry around unknowingly. And every time we as individuals of power and privilege accidentally – or knowingly – react out of that bias, we continue to spread those seeds and stereotypes into the wind. We empower a perpetuating narrative that causes others to feel the negative effects every time they walk into a store. However, the greatest danger comes when these messages of bias are expedited through systems put in place in specific communities. The images and stereotypes of all ethnicities portrayed in social media, entertainment, and elsewhere over time infect our beings with unconscious biases, predisposing us to become activators of or apathetic by-standers to racial prejudice. This only contributes to the conditions for the “perfect storm” mentioned in the first question above.

Ultimately, these seeds come from the same place as this lynching tree. 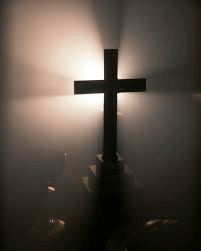 Accepting this, our group was able to talk about the differences between overt and averse racism. We discussed the various ways that racism today has become savvier in its manifestation. The population demographic shift we are experiencing in the US means there are more nuances than ever in the complex phenomenon of racism.

And yet, for those who wish to supplant those seeds from the lynching tree to the cross on Calvary, I ask, how must we exercise our privilege and power in order that all things are made new?

What do you think?

AUTHOR BIO: Robyn Afrik, CEO of Afrik Advantage, is a platform speaker, national consultant and strategist on issues surrounding reconciliation/diversity, international adoption, multi-cultural families, and identity formation. She has worked in community development and fundraising efforts both in the private and public sectors. Robyn, a Korean adoptee, continues sharing her own unique and personal story to inspire, teach, and challenge those being called to address issues of social change. Robyn works with organizations of all sizes to share her expertise in bridge-building on all levels.
Website: www.afrikadvantage.com
Twitter: @afrikadvantage
Email: assistant2afrik@gmail.com

An Anniversary and a Prayer