White privilege means waking up in the morning with the ability to decide whether or not racism will be a part of your day.

Just ask people of color who teach their black sons how to interact with police so that they can stay alive. Or who listen to well-meaning compliments on our ability to speak English while repeating over and over that we are “from here.” Ask people of color who live in fear that the wrong gesture or glance will result in an accusation of terrorism, or those who watch as our cultures are narrowed down to a November holiday that probably didn’t happen like the picture on the Hallmark card. Ask those families who have been accused of “hopping over the border” to work illegally in this country.

We don’t get a choice. Racism is a part of our lived experience.

And, in case you think that the last few years illustrate a rise in racism, white supremacy, and the suspicion of black and brown bodies, we should be conscious that a handful of the stories are finally making the mainstream news, while even more continue to go unnoticed.

I make it very clear in my speaking engagements as the Vice Moderator of the Presbyterian Church (U.S.A.) that our denomination is 91% white. It probably helps to soften the blow that the congregations and regional governing bodies to whom I speak receive this news from a Chinese American clergywoman. Perhaps it encourages people to feel good that a young adult person of color has risen to one of the highest elected offices of the denomination. It may be tempting to think, “Yes, there is work to be done, but look at how far we have come! She’s Asian and young and a pastor! (And a woman!) We might have a ways to go, but doesn’t she represent a piece of our success?!”

People of color have been always been a part of the Church universal and participants in the Presbyterian Church (U.S.A.). To say otherwise is contrary to what we profess as people of faith. Unfortunately, in the present demographic culture of the PC(USA), people of color are often, consciously or unconsciously, seen and even used as token representatives of a particular group. Like so many others, I have wondered which category I am ‘representing’ at a given table – or if the intersectionality of the aspects of my identity allows more than one box to be checked. So often, our denomination acts as if one person can represent a whole people. (Ask my good friends and they will confirm that I say over and over again, “Yes, Asia is a big country.”) 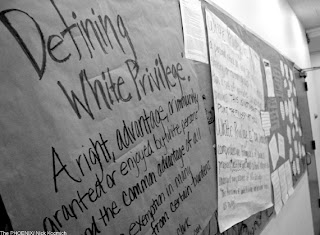 The freedom of our faith should be taken seriously so that the world can be transformed. In the words of the Belhar Confession, “We believe that God’s lifegiving Word and Spirit has conquered the powers of sin and death, and therefore also of irreconciliation and hatred, bitterness and enmity, that God’s lifegiving Word and Spirit will enable the church to live in a new obedience which can open new possibilities of life for society and the world…” [1]

But freedom, especially freedom in the hands of the majority, can be abused. This freedom was used to take land from the indigenous people of North America and claim it in the name of Manifest Destiny. Freedom has been used to control and subdue people (Native Americans, slaves, and women, just to name a few). It’s freedom that nests communities of color within church buildings belonging to majority-white congregations, who are usually the ones to decide the rights and privileges of the nested community, often with little engagement between the congregations. There is the freedom used to determine what is an “essential document” worthy of being translated into multiple languages for denominational dissemination. [2] This freedom led to the creation of non-geographic presbyteries based on race/ethnicity while easily upholding such segregation, forgetting that they were meant to be temporary all along. And often, this freedom allows us to stand behind our rhetoric instead of plunging into the deep waters of racism and white supremacy – from our congregations to our regional governing bodies, seminaries, organizations, and even the national level of the denomination.

Ultimately, the power, privilege, and freedom of whiteness allows the denominational majority to feel as though good work was and is being done while, in reality, people of color are often left to fight for the scraps underneath the table.

I’ve watched these patterns unfold time and time again over the past year and half. My denomination [3] claims itself ‘aware’ when it comes to race as we seek to add the Belhar Confession to our Book of Confessions and celebrate the almost fiftieth anniversary of the Confession of 1967. It’s as if naming that we are 91% white releases us from living out the remedy.

The truth of the matter is that percentages are choices vested with the privilege to live toward change, or not. As Christians, however, we know that this choice is not neutral; it is our God-given call. To truly live out our call, the white majority of my denomination will have to choose the side of the underprivileged over and over again. They will have to endure the cost of this choice on behalf of the call to live in unity with those who have been here all along.

Welcoming others into our midst on Sunday mornings means that worship will not look, feel, or be the same as it was before. Tried and true customs will have to go in order to make room for the traditions of others. Session, board, and committee meetings must transform to provide space for those who engage differently. Decision-making processes that advantage those familiar with the “rules” will need to shift.

It means that immigrant fellowships will have a different place in the life of our denomination, as we find ways to give them a voice and empower their ministries so they are upheld as integral to who we are. The Church must begin to value differences rather than observing them as roadblocks. Conflict will become not something to fear, but a deep water to wade through to capture a glimpse of the Promised Land. Perhaps we will begin to live into words that have been in our confessional standards for nearly 50 years: “The church disperses to serve God wherever its members are, at work or in play, in private or in the life of society….The quality of their relation with other persons is the measure of the church’s fidelity.” [4]

Our desire to be diverse must rest in an honest hope for better relationships with those who are not like us. This can’t be a numbers game to save our denomination. We do this hard, messy work because it’s what God calls us to do and who God calls us to be.

If you are overwhelmed about the work ahead…good. There is not an easy solution to the persistence of systemic racism. We can’t avoid the brokenness right before us because it is outside and inside our church walls. The only remedy, if we even want a chance at reconciliation and wholeness, is to go right through the pain and hurt. Relationships can only be mended through honest, thoughtful confession. This will come at a cost, financial and otherwise. [5]

Being a part of a denomination and the Church universal means listening to and learning the stories of our brothers and sisters until we know them as well as we know our own. [6] At the very least, the experiences and narratives of people of color should stand with their own validity. People of color make ourselves vulnerable to share our stories, knowing that others may hear such experiences and treat them as if they did not happen in the way that we remember. To explain such stories away or rationalize actions illustrates the privilege to turn away from the truth.

The time is long overdue to cultivate a welcoming church that acknowledges God’s presence in the places we have yet to courageously face – inside and outside of our church’s physical walls.

Trust me, God has been there all along.

“With an urgency born of this hope, the church applies itself to present tasks and strives for a better world. It does not identify limited progress with the kingdom of God on earth, nor does it despair in the face of disappointment and defeat. In steadfast hope, the church looks beyond all partial achievement to the final triumph of God.” [7]

[1] Confession of Belhar, Section 3.
[2] It can also be said that the preference of translation into Spanish and Korean neglects the countless other languages represented in the Presbyterian Church (U.S.A.).
[3] I use the word, “denomination” as a living, breathing being; a body of the church made up of each one of us as Presbyterians. It is active and moving within the world when we live out our callings.
[4] Confession of 1967, 9.37. Italics added for personal emphasis.
[5] The Synod of the Northeast recognized the wrongs done to the Witherspoon Presbyterian Church in Princeton, NJ. The congregation’s debt was forgiven in recognition of the racist acts against Rev. William Robeson in 1900: https://www.pcusa.org/news/2015/11/13/historic-church-debt-cancelled-act-racial-reconcil/
[6] Watch this TED Talk by author Chimamanda Ngozi Adichie to learn about the power of story to shape one’s perception of the world: https://www.ted.com/talks/chimamanda_adichie_the_danger_of_a_single_story?language=en
[7] Confession of 1967, 9.55.

AUTHOR BIO: Larissa Kwong Abazia is a 2.5 generation Chinese American clergywoman. She serves as the Director of Church Relations at Princeton Theological Seminary and the Vice Moderator of the 221st General Assembly. Larissa currently resides in New Jersey with her husband and young son.

Racism Across Borders: Belhar, South Africa, and the United States

The Latin American community is not a single monolithic group;