Commentary on Tony Judt’s “Ill fares the Land” and the review by John F. Kane 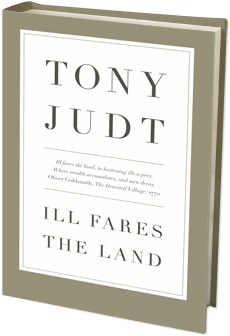 The loss of Tony Judt from our midst last year brought grief to many of us who looked to him for clear ways of understanding how the Post Cold War period led to our new age of obsessive materialism with its deepening inequality. Historian of a Europe torn apart during and after WWII, he wrote trenchantly about its anatomy of tragic follies. In Ill Fares the Land, the book reviewed here by Professor John Kane, he quotes the observation of George Orwell that “to see what is in front of one’s nose needs a constant struggle.” Tony Judt struggled to help us see.

All the more reason to regret that during the last ten years of his life he was hounded and punished for what he saw and honestly expressed about Israel’s policies. A secular Jew himself, he wrote that

the problem with Israel, in short, is not…that it is a European ‘enclave’ in the Arab world; but rather that it arrived too late. It has imported a characteristically late-nineteenth-century separatist project into a world that has moved on, a world of individual rights, open frontiers, and international law. The very idea of a “Jewish state”—a state in which Jews and the Jewish religion have exclusive privileges from which non-Jewish citizens are forever excluded—is rooted in another time and place. Israel, in short, is an anachronism. (New York Review of Books “Israel: the Alternative” October 2003)

Such thoughts brought out the knives and shaped much of his remaining life. Detractors included the ADL’s Abraham Foxman, Brown University’s professor of European History Omer Bartov, and social scientist Michael Walzer at the Princeton Institute for Advanced Studies—and many others. Some of his speaking engagements were famously cancelled. He was to speak in 2006 at the French embassy in New York at a book launch for Carmen Callil’s story of the Vichy official, Louise Darquier, who arranged the tragic deportation of thousands of Jews. Implausibly it was cancelled when a phone call came to the embassy from ADL executive, Abraham Foxman.

Scholars with historical memories like Judt’s have faced strong ideological opposition. He was not alone, as a symposium the same year at Cooper Union demonstrated when the scholar John Mearshimer, co-author of The Israel Lobby, was subjected to the accusation of “poor scholarship.”

These attempts to silence voices like Judt’s signaled the change underway in our common political life. A malignant strategy emerged to block anything from being said that advocates of an Iraqi invasion or Israeli-Occupation deniers would not want to hear. It can be applied on a broad front as a modern version of propaganda and social control.

A major point in Judt’s book, Ill Fares the Land, is about this evil disjunction that has grown up between civic discourse on substantive issues and the need of powerful groups to suppress and pre-determine the public conversation. The method has been very successful. Ten years after Judt’s criticism of Israel, its settlement enterprise grew from 250,000 to 500,000 settlers living on Palestinian land. Eight years since the Presbyterians began debating a boycott of U. S. products used in the Israeli occupation—millions of words later, in fact—the efforts of the powerful were rewarded when Israeli Prime minister Benjamin Netanyahu addressed an obeisant joint session of Congress last spring. Support by the U. S. today is now for an Israel in which any plausible bi-state or two-state solution that delivers justice for the Palestinians seems out of the question.

Professor Kane is correct to observe that Tony Judt, who was raised and educated in England and on the European continent, was never fully tuned to the mix of American culture that bound together the ideals of freedom and individuality with the biblical mandate to use such gifts to establish justice and serve the common good. Nevertheless, Ill Fares the Land is his own eloquent and optimistic prophetic vision. He maintains that materialism and selfishness are not inherent in the human condition, that much of what appears natural today came from the 1980s:

the obsession with wealth creation, the cult of privatization and the private sector, the growing disparities of rich and poor, And above all, the rhetoric which accompanies these: uncritical admiration for unfettered markets, disdain for the public sector, the delusion of endless growth.

“We cannot go on living like this”, he says.

Indeed not, and to this end we are about to be sorely tested in coming months as to whether we can modify and deter rampant wealth and power with our faith communities’ commitment to equity for all the people of God.

Read Rev. Rawlings’ response to the PC(USA) 2012 vote on divestment 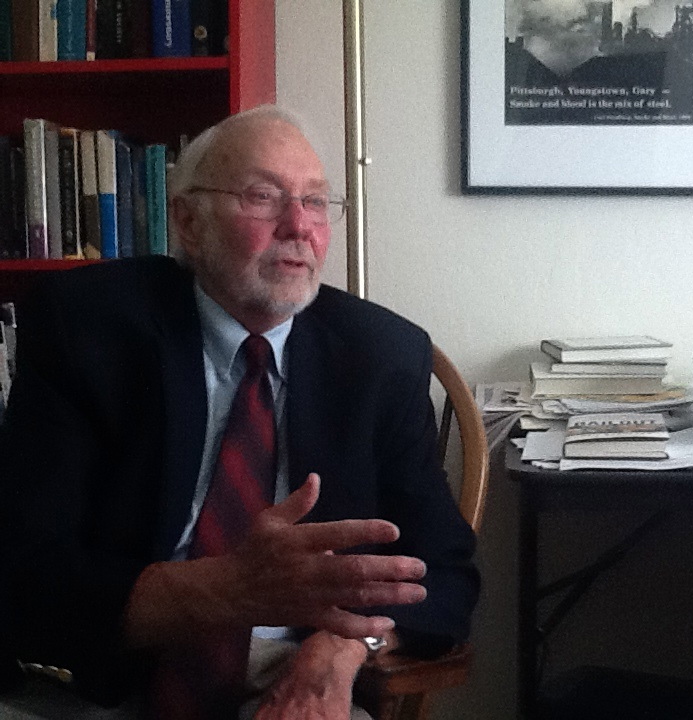 Chuck Rawlings has spent a lifetime in advocacy for civil rights, economic justice and peace, especially peace with justice in the Middle East. He has held leadership positions in ecumenical agencies in Cleveland, the state of New Jersey, and in the National Council of Churches. He is currently working on the deepening crisis of high unemployment and inequality with emphasis on returning or initially locating computer-related assembly jobs in communities with high unemployment in the U.S. He is a graduate of Union Theological Seminary. He writes a blog at publicliturgies.blogspot.com.
Share this
Tags:

Standing Up for the Iran Nuclear Agreement

Standing Up for the Iran Nuclear Agreement

For the past 40 years, the United States and Iran