On the Brink of a Historical Moment

By Sara B. Dorrien, reporting on the Middle East Committee of the Presbyterian Church (U.S.A.) 220th General Assembly (Please note that while the committee has recommended divestment, the Assembly has not voted yet.) 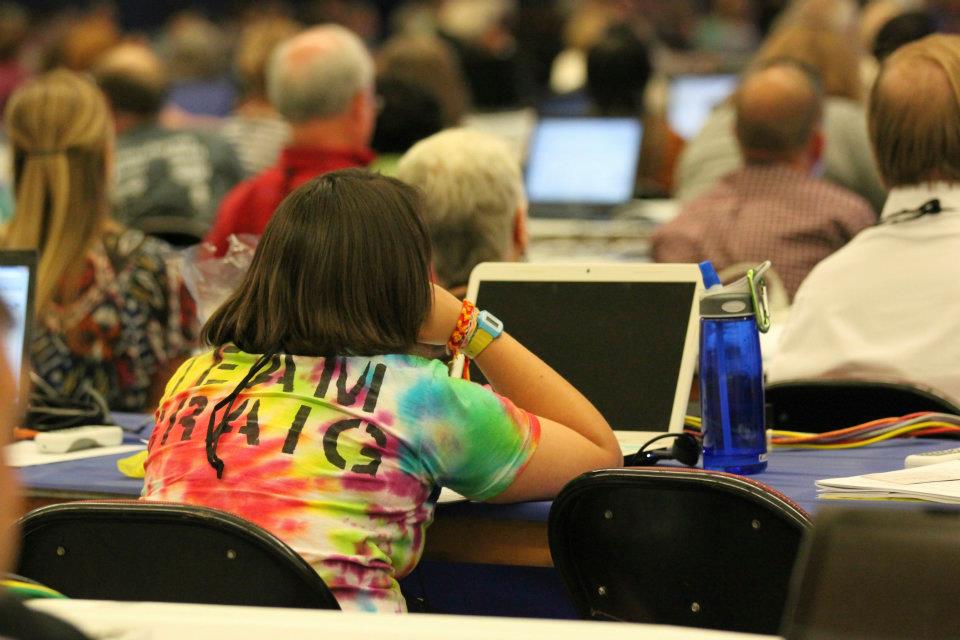 It was well after 10 PM on Monday evening when Committee 15 (Middle East and Peacemaking Issues) finally adjourned, fatigued and overloaded with information, competing claims, and emotional testimonies.

The major item considered that day was the controversial report from the Committee on Mission Responsibility through Investment (item 15.11), calling for selected divestment from companies who profit from non-peaceful pursuits in Israel-Palestine. (Brian Ellison, the committee chair, stressed that this recommendation had been reached after years of failed engagement with the companies in question and the belief that further negotiation would prove fruitless.) After hours of passionate argument and debate, amendments, and “amendments to amendments to amendments,” the committee adjourned without taking the long-awaited vote, much to the chagrin of the countless activist-observers in the back of the room.

The committee had adjourned after directing staff from the General Assembly Mission Council and related agencies to write an official comment (to be included with the report from MRTI when it is sent to the plenary floor later this week), describing in detail how divestment would proceed should the General Assembly choose that path. The decision to make this request of the staff, despite the understanding that it would postpone the committee’s vote until the next day, reflected what many perceived as a general uneasiness among the commissioners.

Those who have followed the divestment debate (and the issue of addressing the Israeli occupation of Palestinian land in general) have often lamented the feeling that they are being forced to choose between two opposing yet equally important people and desires. On the one hand, they value the relationships built with Jewish sisters and brothers (relationships that often took years to form and whose maintenance requires ongoing efforts to build greater trust) and understand their anxiety about Israel’s security in an unstable region. On the other hand, they acknowledge that Israel is indeed engaged in a military occupation of Palestinian territories, causing great suffering to and exploitation of the Palestinian people. With a few exceptions, the commissioners tasked with recommending divestment to the General Assembly seemed to understand the complexity of the issue and the undeniable fact that, should the Presbyterian Church (U.S.A.) choose to divest, a significant portion of the American Jewish and Israeli population will likely take offense.

Perhaps the most interesting point in this discussion is the fact that PC(USA) divestment from the three companies will yield very little monetary impact, nor will divestment alone bring about a swift and just end to the 45-year-old occupation. Along with a concern for the state of Jewish-Christian dialogue, this is reason enough for many to reject divestment as a tactic. Honna Eichler, Grants Manager at Interfaith Worker Justice, and speaker at the GA breakfast hosted by Presbyterians for Middle East Peace on Saturday morning, claims:

The PC(USA) can divest and symbolically stand for Palestinians, or the denomination can be more than just symbolic. In supporting Palestinians, it can productively, not symbolically, support them. I say divestment is symbolic because it will be a statement on paper, but won’t impact the companies in question or broker any peace. Towards a more productive end, Presbyterians can commit themselves, and their relationships with Palestinians and Jewish allies, to building relationships that will address the issue. American Presbyterians have very little impact on Israeli policy, but American Jews do have weight in this area. Why, then, in working for peace, in loving one’s neighbor, in acting for the oppressed, would the denomination divest, and compromise its relationships with American Jews, who are able to work with the Israeli Government? Peace will not come about without the involvement of American Jews and Israelis, and divestment would destroy most, if not all, of Presbyterian relationships with allies in these groups.

Considering the resources, time, and passion both sides have invested in this issue, what is clear is that despite the lack of monetary influence, divestment carries with it a substantial amount of moral and political weight. For those against divestment, this is a toxic weight that alienates our most important conversation partners—American and Israeli Jews who have real influence over Israel’s policies. For those in favor, the moral weightiness of divestment is necessary precisely because it communicates to our Jewish partners, to the United States Government and U.S. companies that do business in the region, to Israelis, and to the world that something is seriously wrong and that other avenues for solving the conflict have been exhausted: companies are profiting from the subjugation of an entire people; and, for fear of being chastised by partners who seem content to crawl towards a two-state solution, we have been afraid to take any real action.

But whatever the vote on divestment, the PC(USA) will be taking a position, either siding with the occupation by continuing to invest in the companies that make it possible—or opposing the violent oppression of the Palestinian people. There is no neutrality here; that much was clear.

In the words of Peace Discernment Steering Team member Shaheen Amjad-Ali: “Of course we don’t want to alienate our Jewish friends and neighbors, but it is also important to show our support for Palestinians suffering under Israeli occupation. If we do not in some way highlight the harm of the Israeli tactics of occupation, then we are tacitly ignoring the plight of Palestinian Muslims and Christians.”

Brian Elison, speaking on behalf of The Committee on Mission Responsibility through Investment echoed this dimension of divestment when he addressed Committee 15, claiming that divestment is primarily designed to function as a Social Witness statement, outlining what we, as a denomination, stand for and oppose. Looking ahead to the General Assembly’s vote on selective divestment and boycott later this week, former Moderator Rick Ufford-Chase echoed that understanding, while adding that divestment will ultimately lead to more tangible outcomes, stating: “It (divestment) responds in an immediate, clear way to the call from the Palestinian Christians community for support in their nonviolent effort to end the Occupation, it will help to maintain the integrity of the PC(USA)’s social witness policy, (and) it will add credibility to the growing movement to use selective divestment and boycott strategies to end the occupation.”

Most of the advocates on behalf of divestment gave similar arguments, often lifting up the plea from Palestinian Christians (outlined in the Palestinian Kairos Document). A number of young Jews (many belonging to the group Jewish Voice for Peace) were included in this group, stressing that threats from the Jewish community should not dissuade the committee (or the Assembly) from following its conscience where human rights and justice are concerned. Responding to the concern that divestment would stifle Jewish-Christian dialogue, Lev Hirschhorn stated: “As a Jew, I will be delighted to dialogue with the Presbyterian Church and its members, regardless of how the church votes. No people or faith can be described as a monolithic bloc.” And in a powerful testimony given to the committee, Anna Baltzer, a Jewish American from the Advisory Committee on Racial Ethnics Concerns implored: “You do not need my permission to do what is right.”

When the committee reconvened on Tuesday morning and the official comment describing the divestment procedure was presented, it became clear that the commissioners intended to move swiftly to a vote. Despite being derailed briefly by a motion to add “The United States Government” to the divestment list (some wondered whether this was introduced by conservative interests in an attempt to “radicalize” the report and thus defeat it; others felt it was a logical step to take), the committee moved on to debate adding an item that would prohibit divestment from those companies involved in peaceful pursuits in Israel-Palestine. The committee voted to approve this addition, believing it would emphasize the fact that the recommendation to divest is selective, confined to those companies who profit unjustly, not a value judgment on Israeli and American Jewish people.

And finally, the vote to divest was taken: with one abstention (from a commissioner who admittedly accepted a free trip to Israel by a group accused of trying to “buy votes”), the motion carried, 36 to 11.  Soon after, the addition of an affirmative vote on item 15.10 (an overture from the Presbytery of Philadelphia that called for Affirmative and Creative Investment in Palestine) further emphasized the committee’s belief that selective divestment and positive investment need not be mutually exclusive but rather complimentary.

But if Committee 15’s proceedings at all foreshadow the larger body’s consideration of this issue (and they very likely do), it will be hotly contested. Activists on either side will make impassioned and educated arguments, and a handful of commissioners who should have done their homework will make statements revealing an embarrassing amount of ignorance on the issue. Those unfortunate moments will make even the geekiest of church polity wonks wonder aloud whether the Presbyterian system of governance is a total failure. During brighter moments, however, I trust that those present will feel God’s palpable presence and be grateful for a denomination that doesn’t shirk away from engaging the hardest of social issues, however imperfectly. One thing is for sure: It is guaranteed to be interesting. Stay tuned!

Sara B. Dorrien is a candidate for ordained ministry in the PC(USA), having recently graduated from Columbia Theological Seminary. She lives in New York CIty where she enjoys a ministry of writing, curriculum-building, and pulpit supply preaching. Sara has been assisting the Advisory Committee on Social Witness Policy and Unbound at the 220th General Assembly.
Share this
Tags:

Sermon: O Church, What Does the Lord Require of You