The author of this article has asked that she and the organization for which she works remain anonymous for the protection of the people who are undocumented with whom she works. The views of the author do not officially represent the organization.

A couple of weeks ago, I was supervising a children’s program at the community center where I work – a biweekly gathering of elementary school children who explore art, science, and math before playing together. Meanwhile, their parents are in ESL classes. It was late in the evening, and my colleagues and I were cleaning up the glitter, paint, paper from our last activity while the children gathered themselves to play Hide and Seek.

To pick the person who would be ‘it’, the children each put a foot into the circle. One child pointed to a foot on each word as they all sang:

Tell me how old are you?

Then, the child who is pointing asks whoever they’ve landed on how old they are and counts out that many shoes. The child they land on is ‘out’. I heard the children sing the song several times, and at the end of each refrain, one of the kids would inevitably shout, “Hurray! I’m out!”

And then it dawned on me: The goal of their game was to not be the last person left in the circle. You don’t want to be ‘it’ at the end.

These rules are fundamentally different than the rules of the game that I (as a young white child) grew up playing: “Eenie, meanie, mynee, mo,” where the goal is to stay in as long as possible. We always wanted to end up being ‘it’. 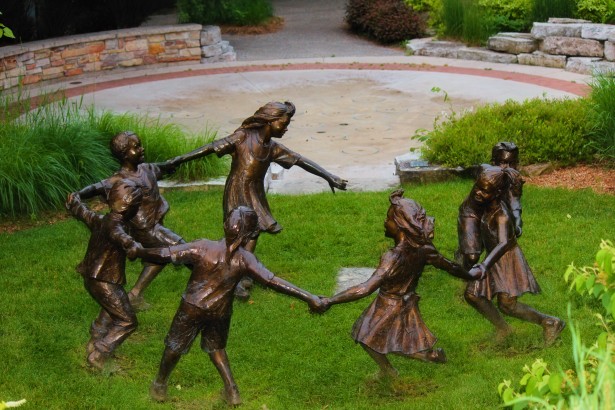 The rules are different, the objective is different, even though it looks and sounds like the same game.

For the last three-and-a-half years, I’ve served on staff at a resource center for a rural and isolated farming community in Northern California. Many of the people we serve are farmworkers. Some of them are in California alone; others are here with their families. They almost all live in substandard housing and do back-breaking labor for minimum wage.

Sometimes my ministry with the organization involves explaining the rules of this country so that farmworkers and their families have a chance at playing the game – whether it’s learning to read, graduating from high school, or having access to a driver’s license. The rules we learn for navigating the world help us succeed – if we learn the right rules and if we play by them.

Our fallen world plays by rules that systematically privilege some people over others. In the United States, our social rules privilege people who are white. We who are white have made the rules for our nation and culture, and we are the ones who police the rules and decide what to do when the rules are broken. By definition, this puts people of color in a disadvantaged and somewhat arbitrary position when it comes to navigating the rules of white society’s games.

I’ve seen this play out time and time again in the work that my colleagues and I do with our beloved community. When California began allowing undocumented workers who otherwise qualified to get drivers licenses, two of my colleagues began working with the Department of Motor Vehicles and our program participants to obtain licenses for those who wanted one and could pass the test. However, there were a number of cases in which proof of residency was a problem because of the rules that are set up for what kind of proof is ‘acceptable’. In those cases we had to advocate for our participants, until the DMV ultimately decided that a letter from our organization was enough to confirm that someone lived where they said they live.

One woman was turned away from the DMV, even though she had all the right documents, because she wasn’t fluent in English (which, incidentally, is not a requirement for a driver’s license). She even brought with her the documents from the DMV website confirming that the forms she had with her were enough. And still she was turned away. The next time I went with her, simply to be a friendly face in a place that is so stereo-typically unfriendly. On this third try, she was finally able to get her license.

Even when they know the rules, even when they play by them, people of color are often not trusted to play the game.

We live in a country that privileges people who speak English over other languages. Increasingly, public and private services are available in other languages, but we who are fluent English speakers are still privileged precisely because we don’t even have to stop and worry whether information will be available in another language. It doesn’t even have to enter our conscious thought. For example, the organization I serve was founded to empower and connect people who have immigrated from Mexico and other Spanish-speaking countries, yet we still have to specifically ask for Spanish-language materials. This happens even when foundations and public service organizations come to us. I want to be clear: this doesn’t always because people are trying to be exclusive. It does, however, mark that we are an English-first society and have to be reminded to speak to other communities, even when perhaps we should know better.

This is one of the reasons why adults enroll in our ESL classes: they know that one of the guiding rules of our culture is that knowing English opens doors. And they come to class with great commitment and devotion. Many of the students show up to evening classes after getting up before dawn and working in the fields for hours, with hardly enough time to go home and shower before coming to class.

For those of us who are white and have grown up in the dominant culture in this country, these rules are embedded in us, and it can be hard to even see them. When we aren’t paying attention, it’s easy to assume that we’re all playing by the same rules. But when we do pay attention, we learn that the rules are different for different people. That the rules that we who are white know and benefit from are unfair, making the system – the ‘game’ that we’ve been taught believe in – unjust. And everyone knows that you can’t win a game that’s rigged.

Whenever we enter into work across cultures as people of faith, we must remember that we serve a God who requires justice. Our faith demands that we we build systems that honor and embrace the dignity and humanity of all people. Dividing the world by race and then applying rules that value some people over others is not how God envisions the world. It is a sin that harms us all.

We are playing in God’s world, but not according to God’s rules.

Recently a student at McCormick Seminary was participating in a retreat I was facilitating. As our group was discussing the rules that would guide our time together, she stopped the conversation. “Can we use the word ‘agreement’ instead of ‘rule’?” she asked. She clarified that ‘rule’ implies that expectations are imposed on us. In contrast, we ‘agree’ to expectations.

I believe the distinction she made is extremely helpful as we seek to dismantle racism in our world. We are all ruled by expectations that we haven’t necessarily bought into consciously, and yet we are still beholden to them. We have let others (historically, people who are white) decide on rules that privilege white people over people of color. I may have never consciously agreed to those rules, but I have let them guide my life. In doing so, I have unconsciously let these rules impose not only on my life, but also on the lives of others.

The call for all of us, but especially for those of us who are white, is to change the rules. We can agree to a different world, a world where racism doesn’t provide the framework for life together. When we play by a rigged system of rules – and especially when we win by those rules – we dehumanize everyone in the game. The sinful system of white supremacy benefits, but nobody really wins.

As I watched those children playing in the community center, I realized that the best thing about Hide and Seek is that there’s always the opportunity to be found. Then everyone gathers in the circle again, and we can decide who gets to be ‘it’ – and how.

And then we play again.

Late We Come? The Need for Unapologetic Affirmation that Black Lives Matter to the White Church