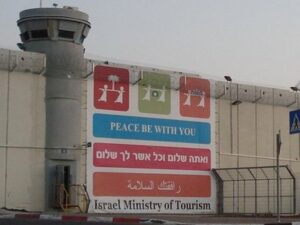 When we pray for the peace of Jerusalem, we should also pray for Bethlehem. Most readers will know that the city is largely surrounded by a high cement wall. Israeli soldiers and surveillance devices control who gets in and out; tourists can come and go, settlers can come and go, Palestinians are effectively locked in except for rare permits.

Bethlehem Besieged is the title of a book by the pastor of the Bethlehem Lutheran Church, Mitri Raheb, who describes the evolution of this grim reality since the Israeli military occupation began in 1967. With constant Israeli settlement construction on Palestinian land—here is a current attempt to take land belonging to the Cremisan Christian Monastery in Beit Jala near Bethlehem—the siege continues to tighten and the chances of a two-state solution diminish.

This December, a brave and non-violent group of Christian Palestinians have built on a two-year old “Kairos Palestine” document with a “Bethlehem Call.” 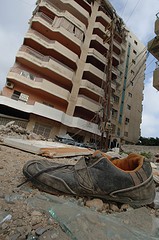 The Kairos signers resisted Israeli government pressure in signing; their residence permits, permission to travel, all mobility is controlled by Israeli security forces. The same courage was required of the Bethlehem group for mentioning economic pressure strategies—such as used in South Africa’s campaign against apartheid. Warning: defenders of Israeli occupation policy have criticized the Lutheran, Disciples, and United Church of Christ for posting this document and urging people to read it. We also give links below to their critiques, but we stand with our Christian brothers and sisters in lifting up these non-violent voices. After all, our basic Presbyterian policy is called “Breaking Down the Walls.” And in fact we do challenge the legitimacy of Israel’s occupation which violates the Geneva Conventions and costs the United States dearly in reputation around the world.

In focusing, at Christmas-time and Christmas-tide, on the plight of the Christian remnant in occupied Palestine, we do not mean disrespect to the Muslim majority. The U.S. State Department’s annual Human Rights report on Israel-Palestine documents the discrimination against all non-Jewish faiths, and to some degree against non-Orthodox Jews. The State Department focuses on government policy, such as the protection given only to Jewish historical sites, and not, for example, the increasing practice of settlers spitting on Christian clergy in Jerusalem. Christians traveling to Israel and Palestine are encouraged to read the document Come & See so that they see an accurate picture of the occupation and do not add inadvertently to the oppression of other Christians or Palestinians generally.

We also link below to the eloquent letters from the Lutheran and Episcopal bishops of the area, which reveal the great struggle for hope among people under steady pressure by an Israeli government committed to a “Greater Israel.” But to provide a broad context for those efforts to maintain hope we quote (with permission) from the personal Dec 17 letter of our mission co-worker in the region, Doug Dicks:

During this season of Advent, and only days before Christmas, who can read Isaiah 9 and not recall the events that have unfolded, not only in the Middle East, but around the entire world, this past year? “The people who have walked in darkness have seen a great light…”

The Arab Awakening, known locally as the Arab “Spring”—which neither began in the Spring nor was confined to just one season—has turned the Middle East both upside down, and inside out.

And it’s not over yet!

From Tahrir Square in Cairo, Egypt, to St. Paul’s Cathedral in London, England, and Occupy Wall Street in New York City, it appears as though people have awakened from a deep sleep, to a new sense of people power, and are risking both lives and limbs to exert pressure on their respective governments in calling for significant change and government accountability: an end to corruption, economic disparity, joblessness, hunger, and corporate greed. As stock markets rise and fall, and countries in Europe teeter on economic collapse, our world seems to move from crisis to crisis, with no real leadership on the world scene to address, once and for all, these global issues. The overarching question remains: will all of these street protests and anger lead to good governance on the part of world leaders, or simply unending discontent and chaos?

One year ago today, a young Tunisian man by the name of Mohamed Bouazizi set himself alight, after police humiliated him, and confiscated his push cart and wares. He was simply trying to make a humble living, in a city, in a country, in a world that was unwilling to allow him to do so. This one single act, though tragic in both its scope and its consequences, lit a spark that spread throughout the Arab world—and beyond.

One can almost hear the ancient plea from Psalm 13 of “How Long, O’ Lord?”

“…But I trusted in YOUR steadfast love; my heart shall rejoice in YOUR salvation.”

On a recent visit to Bethlehem, Palestine, I heard hope expressed, over and over again. Several people said to me that they were not “optimistic”; however, they did say, they had “hope”. Yet how does one provide “hope” to the younger generation, in situations that appear to be hopeless? How does one distinguish between optimism and hope? It is living into HOPE that is perhaps the greatest challenge for the church in the Middle East—and I suspect, for the entire world—in these times of uncertainty, doubt, fear, want, and despair.

Yet, the Christmas story found in Luke provides us all with the assurance of God’s love for us, and God’s will that we live lives that are worth living.

In a broken, restless world, full of broken people, just like us, All redeemed by God’s grace, the child of Bethlehem continues to provide us with, and instill in us, hope. Jesus Christ is both our hope and our peace.

“For HE is our peace; in his flesh he has made both groups into one and has broken down the dividing wall, that is, the hostility between us.” (Ephesians 2:14)

As we make our spiritual journey towards the manger of Bethlehem in these waning days of Advent, we take comfort—and hope—in the child of Bethlehem, born into a restless world that, though centuries apart, was probably not unlike our own…

The Christians, and indeed, all peoples of the Middle East, are longing for justice in the Holy Land today. But following Christ demands unequivocally “Love your enemies; do good to those who hate you.” And from the words of the Bethlehem Call, issued last week from the Kairos Palestine group, “…victims and perpetrators cannot be put on equal footing in efforts to create illusions of balance… In love, we rage against injustice and yet refuse to be destroyed by our anger.”

“In this world you will have trouble, but take heart; I have overcome the world.” (John 16:33)

In an age of empire, overcoming the world is what we as Christians are called to do. Not to conform to the world, but to overcome it…

In this season of giving, and of “peace on earth, goodwill to all,” may we have a greater awareness of those around us—in our church, in our communities, in our societies, and in our world—and respond whenever possible with compassion to those in need, keeping in mind that YOUR face might very well be the only image of Christ that they see.

Wishing you the peace and joy of this season,  Doug

The Rev. Chris­t­ian Iosso, Ph.D., is the Senior Edi­tor of Unbound and Coor­di­na­tor of the Advi­sory Com­mit­tee on Social Wit­ness Policy.
Share this
Tags:

From Palestine to Portland

Christmas and the Better Angels of our Nature

CRISIS MINISTRY CAPACITY: Now is the time to build more of it.

“Don’t just do something, stand there.” The first thing to do in

Why Warren should stay in: An Anti-Sexist Case

The Senate, “Under God?” A Pre-Presidents’ Day Post-Impeachment Meditation

Impeachment and the Perils of Purple Piety: Why You Should Hold a Forum at Your Church

We humans suffer enough already, without abandoning one another. The