“What does the new hymnal communicate about justice and inclusion for people with disabilities?”

There is really no answer to the question of what a volume of 853 hymns will communicate to someone in the pew about justice and inclusion for persons living with a disability. What is communicated will depend upon the person who chooses the hymns to be sung in the particular faith community – Will it be the pastor? The music director? A praise team? Will there be recognition of such denominational themes as Disability Access/Inclusion Sunday? Are folk living with disabilities welcome, both architecturally and actually, into the life of the congregation?

Understanding the impossibility of this task – and the cursory nature of my review – let us dive in!

My perspective is that of a person living with a mobility disability since birth…adding to that the indignities we experience as age begins to slow us down in mind and body. I have been an active member of Presbyterians for Disability Concerns (PDC), and was part of the group who gave input at the beginning of the hymnal process. After simply scanning the first text pages and the hymns through #27, I welcome this hymnal! And there, let us pause.

This is what I was looking for: #27, Ruth Duck’s “Sacred the Body” – a hymn inclusive of different bodies, with respect for each, just as created by God! Inclusion of folk living with disabilities is not the same thing as praying for healing for someone who has been injured. It is not the same thing as mourning the broken bodies of war. It may become that, but it is not the same. “Sacred the body God has created, temple of Spirit that dwells deep inside. Cherish each person; nurture relation. Treat flesh as holy, that love may abide.”[i] This hymn is intended as a theological statement against abuse as we generally define it, (physical and/or sexual) but abuse comes in many forms: lack of acceptance, attempts to fix what is already whole, or uninvited and rude attempts to assist. We need to recognize the wholeness of each individual, understand our own discomfort and awkwardness, and then use the same courtesy we would with anyone else – ask, ‘May I help you?”

Ah, I’m feeling some warmth toward this hymnal! Now, back up to #19, “God of Great and God of Small,” and let’s see what Natalie Sleeth had to say way back in 1973: “God of great and God of small, God of one and God of all, God of weak and God of strong, God to whom all things belong, …”[ii] Funny how this children’s song and Ruth Duck’s 1997 text are so “on target” about inclusion, but are just now entering our official hymnody. Thank you to those who are bringing us these texts.

Now, there are three concerns I’d like to address:

This is the area in which PDC was initially consulted. I am pleased that, although results are mixed, my colleagues have offered some positive feedback on the formats that are in production. “Great new hymnal stuff!” said one. This is a very difficult area because, again, it is so individualistic. No one solution will solve every person’s need, even within one area of sensory, cognitive, or physical disability.

For those living with minor physical or visual impairments, Glory to God is available in a large print, loose-leaf format, so that just the hymns for the day may be selected and the weight of a full hymnal can be avoided.

For those who are blind, our PDC Consultant for Visual Disabilities[iii] has provided some assistance:

Thank you, Rick for your service!

Under “Theological Vision Statement,” on page 926-927, there is a missed opportunity, possibly because the PDC’s role was limited to initial input Part of the Statement reads, “The rich narrative of salvation history…makes audible the manifold ways in which God engages people of different ages, nationalities, races, and genders.” What about abilities? Right there in the same paragraph is a mention of the Ethiopian eunuch, an example not only of different nationality and gender, but also of procreation disability. It was staring the editors in the face! (By the way, there is no hymn about the Ethiopian eunuch, just a footnote referring to the Acts 8:26-39 passage with hymn #222, “Rejected and Despised.”)

Another missed opportunity was in neither turning to nor referencing the resources in the PDC’s Disability Inclusion Resource Packets. Themes have ranged from children with disabilities to welcoming our returning soldiers (See links below [iv]). Each year’s resources contain hymns and liturgies. As in any collection, some are for the ages, and some are relevant for one-time use. An example of a joyful call to worship, written by the Reverend Mary Austin, comes from the 2012 packet, devoted to issues of aging:

I will never forget Brian Wren’s advice, some decades ago, not simply to “helicopter in” replacement words. But I felt compelled, nonetheless, to search the volume for key words and see what magic the Hymnal Committee had wrought. I found no trace of “deaf” (software glitch or actual?) and 8 uses of “blind” (strictly referring to persons). Since I have no sensory impairment, I cannot speak to an affected person’s reaction to these words. However, I can speak to this: the word “lame” appears 4 times. “Lame” has been adopted to show disrespect to just about anything, and I do wince every time it is used. The only worse label is “cripple.” It’s found in scripture and in the English translation of a beautiful Spanish-language hymn, “When the Poor Ones” (I’m wishing here for a helicopter solution!).

Sensory imagery is abundant in Glory to God. I was interested to see the clever poetic use of the word Braille in #256, “These Things Did Thomas Count as Real,” text by Tom Troeger. And in #726, “Will You Come and Follow Me,” a beautiful John Bell hymn, a wide variety of sensory images are used, all in one hymn. In #302, “When Hands Reach Out and Fingers Trace,” there is a verse celebrating sign language and another acknowledging different ways of knowing – which could reference autism or cognition. And for those dealing with Alzheimer’s or dementia, along with other losses, there is a new hymn (#808, “When Memory Fails”) and the old Watts hymn “I’ll Praise My Maker “(#806, Ps 146 paraphrase). What a joy to find the old and the new working together in this hymnal to offer comfort and hope, strength and inclusion. 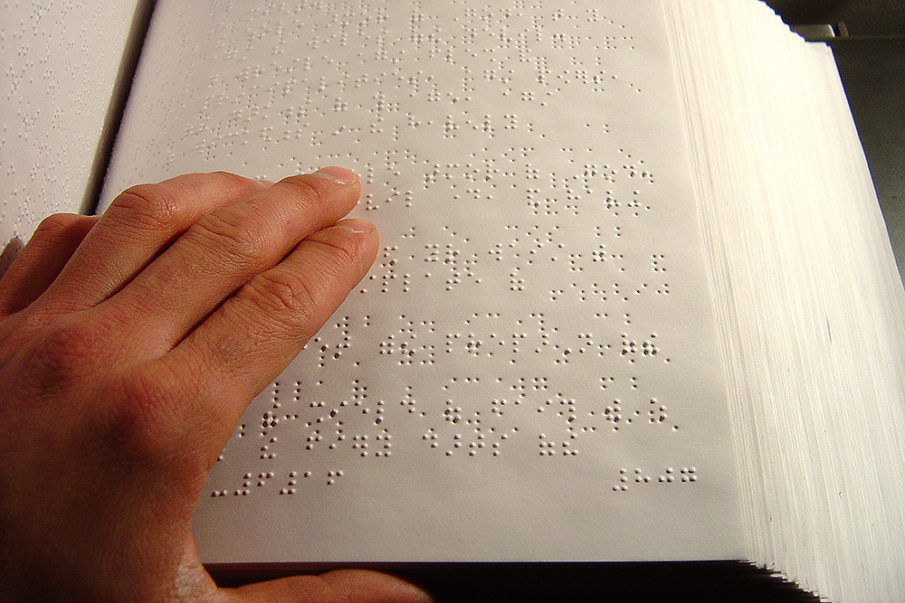 The Theological Vision Statement for Glory to God states that the Hymnal’s overarching theme is “God’s powerful acts of creation, redemption, and final transformation.” It is hard for anyone living in what society considers a “normal” body (one with 4 functioning limbs, 2 functioning eyes, uncompromised hearing, generally acceptable facial appearance, etc.) to understand that many of us consider even odd parts of our bodies really us, and that not all folk living with disabilities desire a “cure.” It’s an individual thing. I think the word “transformation” may be key. It enters into that mystical, unknown world of the afterlife. Do I want to be “cured” then of what I’ve known to be my “self” for all my life? Do you want to be the younger you, but with your current wisdom? Really, what relation will that spiritual body (I Cor 15:44) actually have to our current body? Will it be a 25 year-old body, an elderly body, a pregnant body? Jesus really messed with our minds, saying, “For in the resurrection they neither marry nor are given in marriage, but are like angels in heaven” (Mt 22:30). Angels? We argue over things we know nothing about. But in this life, let us sing about love and justice, acceptance and inclusion – let us sing of and with all God’s children. Hallelujah! Amen.

AUTHOR BIO: Rev. Robin Lostetter is a lifelong church musician, spending most of her career as an organist/choir-director. She has been a teaching elder for nearly 14 years, currently serving First Presbyterian Church, Bordentown NJ. She has 2 daughters and 4 grandchildren; lives with her black cat, Luna, and two house rabbits; and blames any quirks on having been born in Roswell, NM, 10 months after the supposed alien landing!

“Melt Down”: A Song About Gun Violence

Searching for Us: 7 Ways the New Hymnal is Queer

Can Inclusion Go Too Far?

As an editor, I’m used to going in search of articles, but

Images of nature and creation in hymnody are hardly new. The psalms,

A few weeks ago, a friend of mine was telling me about

It was 1966 when, after taking the bus from New