As an editor, I’m used to going in search of articles, but this time the article found me! While brainstorming for this Advent issue, I came across the following Facebook conversation among several friends. This article documents the beginning of a conversation that is by no means over, and I invite our readers to continue this conversation and others like it, whether here at Unbound or in your own worshiping communities. In the words of one of our authors below, “I love that the new hymns have got us all talking!”

The hymn in question is “For Everyone Born” (#769) by New Zealand hymn writer Shirley Erena Murray. The hymn has already become a favorite of many welcoming and justice-seeking congregations, but one verse in particular has sparked both controversy and conversation. Verse 4 proceeds:

The conversation about this hymn and this verse in particular is ongoing. For a sampling, check out these responses by Lauren Hall, Sarah Moon, and Adam J. Copeland, the last of which grew out of this same Facebook conversation.

The conversation began with a Facebook post from Charles after a Sunday morning service at Ginter Park Presbyterian Church during which the congregation sang “For Everyone Born” from a copy of the hymn with verse 4 omitted. Charles writes that the issues around this hymn were first raised for him at the Tallahassee Conference on Church Music in January/February 2013, where Rev. John Thornburg of the United Methodist Church pointed to Verse 4 and the potential pain surrounding its inclusion.

Charles: I see that “For Everyone Born” (#769) is bound to be a difficult hymn, causing trouble even before most churches are using their new hymnals.

Doug: Because of the strangely varied periods of rest? Or the text? Or the shifts from triple to duple?

Charles: Because of the other verse – verse 4.

Sarah: Wow, that verse is really problematic. Trying to hold the ideas of radical welcome and acceptance and of accountability and justice in creative tension with one another seems kind of impossible in the case of abuser/abused.

Christopher: Impossible seems like a strong word…maybe exceedingly difficult for our human notions of welcome. Real grace is a strange and powerful thing indeed.

Doug: I used this hymn for another occasion last year, and I forgot that I had removed the verse in question. It will be interesting to see how the hymn works over time; after a first read, the abuser/abused line is what sticks with you.

Charles: At minimum, churches are going to be forced to have the discussion, should the hymn come up.

Christopher: Which is potentially a great thing!

Carla: Abuser/abused would have worked well for today’s worship service, I think. The tune has been stuck in my head all day!

Rachel: I think it’s the ultimate illustration of shalom.

Doug: On the other hand, “O God, We Bear the Imprint of your Face” (#759) is a good hymn that has a lot to say about us being created in the image of God. It also has a lot to say about racism, so it’s hard to use it unless addressing racism is something you’re prepared to do in a particular service. So, most of us have rarely sung it. “For Everyone Born” will be sung more, but I think there is a risk that comes with this kind of specificity.

Carla: Specificity. Ok, now I’m wondering: how much specificity are folks assuming? As I parse the verse, abuser/abused moves just/unjust along – makes it personal. At the table God gathers people who were not only just/unjust in a vacuum, but people whose acts of injustice had an impact on each other – people who treated one another badly, even cruelly or violently. That’s REAL in a way that challenges us; it’s hard, I agree. But…is it harder than “Let goods and kindred go, this mortal life also; the body they may kill…”? [From “A Mighty Fortress is our God,” Hymn #275 in Glory to God]. I had a colleague who choked up every time he sang that, it challenged him so.

Doug: Good point, Carla. Maybe “A Mighty Fortress” should be forcing more discussion than it does.

Carla: Maybe our “Struggling with Scripture” Sunday school class could have a unit on hymn lyrics!

Charles: A lot of hymns should provoke more discussion than they do.

Doug: I give great credit to any hymn that inspires this kind of response. I’ve attached a good link with some background. The writer’s point of view is more about human rights than welcome, it would seem. I’m not sure I would agree with her statement that omitting the verse makes a worship leader insecure. I wonder whether those words are just uncomfortable to sing or are potentially painful (for some) to sing. I’m not sure where the line is.

Christopher: A lot of people who survive abuse might feel unwelcome, that’s true. I know a few people in my life and ministry who have survived sexual and/or physical abuse and have commented to me that they find the idea of grace and welcome to the abuser difficult, but a welcomed part of their own process of forgiveness and moving on from the event. One said that the hymn would be powerful used in its entirety with appropriate pieces elsewhere in the service…I love that new hymns have got us all talking!!!

Miriam: I might be referencing this verse as part of the sermon for this Sunday (World Communion) – recognizing that in an international context, churches are coming together at the table across lines of historical and ongoing economic/political/social abuse. As my pastoral care professor would say, ‘Reconciliation does not mean restoration!’ As we seek to end cycles of abuse – both inter-personal and international, how might God’s grace embodied in communion allow people to hear the call to ‘a new way to live’ – not restoring past relationships or ignoring what has happened, but bringing about a new way to live for everyone involved? (I am continuing to reflect on this myself.)

It was at this point that I interjected into the conversation and asked the participants if I could incorporate this conversation into an article. I also added this article by Sarah Moon to the table for consideration.

Beth: I was thinking about how small our ideal of table is. When we say table, we think about the one in front of whatever church we are picturing. This verse is more problematic if you are trying to reconcile abuser and abused being together at a table as we perceive it. I am wondering what shifts in the discussion occur if we take away the physical table that seems limiting in physical space and consider a table that is more like, the realm of God. Do issues of proximity and safe distance remain when we expand and recreate the shared space beyond what we understand as humans?

chatological welcome and forgiveness and the sharing of physical space in our congregations. Creating a safe space has to be a priority, and that means protecting survivors of abuse when necessary because we are human.

Christopher: I like the article. She highlights the reaction that some Christians do have, which I think is their way of dealing with their own discomfort at being close to someone who is abused. And discomfort with the fact that “everyone” at the table really should mean “everyone.” Good stuff, yet, I would challenge her in imagining reconciliation without forgiveness. Sometimes I think the idea that we have to force people to forgive their abuser or hurtful person in order for anyone to experience grace is a myth. God forgives. Our lives are temporal, and the process of forgiveness and reconciliation can’t boil down to “get over it.”

Christopher: And yet, as hard as the message is, inclusion cannot go to far. It can only be mishandled in its execution. When a church chooses to censor any work of art, be it print, video media, or a hymnal, it has to do so with great love, reflection, and wisdom about the message that censorship is sending to the body of Christ. There is a way to reflect the redemptive nature of Jesus Christ and stretch our love beyond the people we deem acceptable. In many ways we are all guilty from time to time of abusing people. Sometimes intentionally and sometimes unintentionally. If we edit out our message of inclusion to not be for “them” then it can’t be for “me” either.

So now it’s your turn – what do YOU think? How ought our human tables reflect the eschatological table of God’s Kingdom? Can inclusiveness go too far? How DO we hold the ideas of radical welcome and acceptance and of accountability and justice in creative tension with one another? 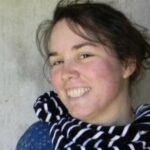 Rachel Shepherd is a final-year M.Div. student at Union Presbyterian Seminary. She is grateful for her seminary experience and looking forward to whatever is next. 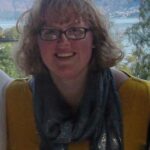 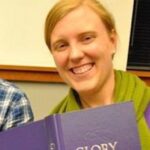 Miriam Foltz is a final level M. Div. student at Union Presbyterian Seminary in Richmond, VA. A graduate of the College of William and Mary in Williamsburg, Virginia with a degree in Music & History, she served as a Young Adult Volunteer in Northern Ireland in 2010-2011 and is currently a candidate under care with the Presbytery of Giddings-Lovejoy. As she prepares for ministry, she is very thankful for the invaluable resource that is Glory to God! She has written another article in this issue about gender justice in the hymnal. 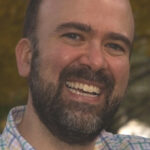 Douglas Brown is the music director at Ginter Park Presbyterian Church and at Union Presbyterian Seminary. In addition to directing choirs and accompanying services at both places, Doug is an avid arranger and occasional composer of music for worship and a parent to six children. He has written another article in this issue about the use of world music in Presbyterian worship. 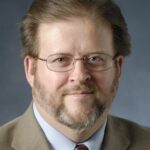 Charles Freeman is a final-level student at Union Presbyterian Seminary and a choral section leader at Ginter Park Presbyterian Church in Richmond,Virginia. Before pursuing theological study, he was an academic musicologist, receiving his Ph.D in historical musicology from Florida State University and teaching at several institutions, most recently the University of Kansas.He has written another article in this issue about environmental justice in the hymnal. 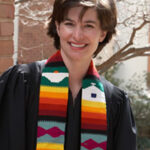 Rev. Carla Pratt Keyes is the pastor of Ginter Park Presbyterian Church in Richmond, VA. She received her B.A. in History and International Relations from the College of William and Mary and her M.Div. from Princeton Theological Seminary. When she isn’t working, Carla enjoys exploring Richmond and Williamsburg with her husband and two children, swimming, reading, writing, and creating or admiring things of beauty. She is also trained to teach yoga and teaches a class at GPPC from time to time. 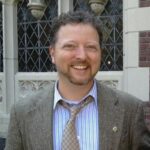 Christopher Tweel is a 3rd year seminary student at Union Presbyterian Seminary. For over a decade he has led Presbyterian youth and family ministries at churches in WV, VA and NC. When not enjoying the company of his incredible wife Leah and his daughter Amara, he hits the trail for some wilderness time in a practice of Sabbath refreshment and inspiration. “

Mandela, Dignity, and Divestment for South Africa: An Interview with Douglas J. Tilton

Searching for Us: 7 Ways the New Hymnal is Queer