On November 6, 2011, over twelve thousand protesters encircled the White House in Washington, D.C., to oppose the construction of the Keystone XL pipeline, which proposes to extract oil from the tar sands of Alberta, Canada, and transport it to Texas for refining. Mobilizing world leaders such as the Dalai Lama and Archbishop Tutu, galvanizing over 1,200 individuals to perform civil disobedience and be arrested, bringing together American Indian tribal leaders and private landowners of South Dakota and Nebraska, the movement to prevent the Keystone XL pipeline has raised serious environmental, economic, and health objections. More information is provided after this brief report from one of the protesters. This movement convinced President Obama to submit the pipeline to re-review, potentially killing the initiative. But the pipeline is not dead yet, and there are many more ideas for similarly destructive projects out there. 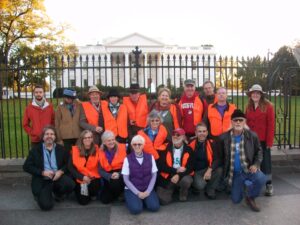 We met in a friend’s driveway at 10PM Saturday evening. After divvying up the space in the two vehicles we were taking, we set out on the overnight 10 hour drive from Louisville, Ky., to Washington, D.C. Friends of mine from a couple of local organizations had put this trip together, so I thought I was going to be traveling with people I knew. But after Bill McKibben (from 350.org) had spoken here in town just four days earlier, several others had signed up to go with us.

We were all introduced briefly, and then in the long car ride spoke about the environmental issues concerning the pipeline, the profits/costs, fracking, alternative energy infrastructures, opportunities, protesting, etc. It was then, in the midst of the excitement of it all, I began to realize that none of my car-ride buddies had ever met each other before, and furthermore, neither had I met any of them before that day. The conversation eventually turned to our own lives, what we do, where we live, our histories, our dreams. I got to know real, everyday humans. I made new friends. And I found I believed in them. Alex is studying ecology at the university; Amy is rebuilding the walls of her house and had never been to a protest before; Ben is finishing editing his indie film “YERT” (“Your Environmental Road Trip”- google it).

In D.C., we stayed with people we had never met before but who had made their place available for us to crash for a night and joined us at the protest: Bradley who works to reclaim damaged ecosystems, Ala’ who designs educational games, Peter who is a carpenter and community builder. 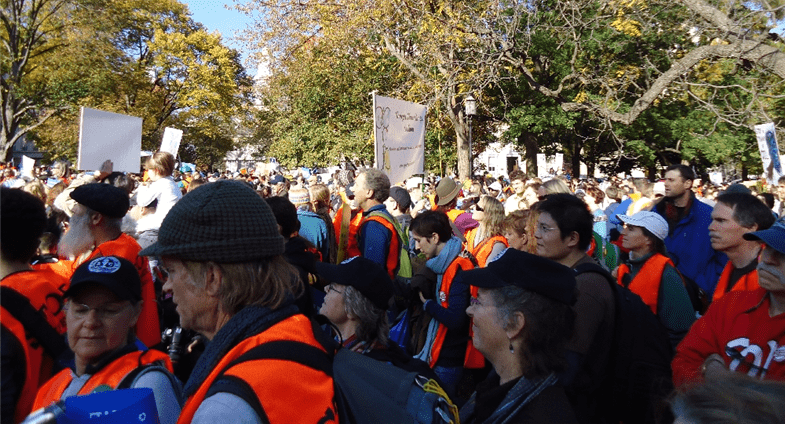 There is already a lot of information on the web about the proposed pipeline and I recommend 350.org’s web page. It seems imperative that we educate ourselves about the consequences of our human behaviors for which we have no redress—and there are loads of them in regards to the pipeline—as it is important for us to learn new actions to help bring our lifestyles into a coherent picture with the rest of nature. Addressing climate change issues and associated environmental change are the forte of 350.org, and I knew I could get behind this. As it turns out, so could several thousand others that Sunday afternoon—12,000 to 15,000 others. Yes, I (and we) stood there listening to the string of speakers at the protest. We cheered, we filled La Fayette Park, we held President Obama responsible for his campaign speeches about getting us off our addiction to oil, we encircled the White House, we stood there some more, we took pictures, we had a good time smiling at other people who could see a new way of doing business in this country. Yes, I stood there to be counted.

My own fantasy was that President Obama would come out on Monday, say “No” to the pipeline, and put forth a plan to hire lots of people to build a new energy infrastructure in this country: a clean, sustainable way of meeting our energy needs. President Obama would, I dreamt, draw a line in time, marking THIS the moment in our nation’s history when WE change our ways, when notice is given to all, and though we realize that others may build a pipeline out to the Pacific to suit their own supposed economic interests, WE are moving into a different future than that predicted by our past. WE are going to lead the creation of a new economy that respects the air we breathe, the water we drink, the soil we tend, the animals we live among. WE are changing our game!

Alas, it did not pan out quite like I had hoped. I was disappointed. President Obama’s postponement of a decision seems like a lost opportunity to pull off a clear shift. Some pundits say this kills the pipeline, others say that if President Obama is not reelected next year, someone else will OK the thing anyway. I do not know the future of national political decisions, but I do know a place I find hope: it is in the faces and lives of so many people I have never met, like those riding in the car with me, those who shared their home with us, those who stood to be counted with us. That’s right, they are where I find hope; these people are the game changers! 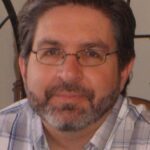 David Tribble has worked as a massage therapist (10years), on a pediatric psychology unit (19 years), and through church communities. He says this of himself: “The all-important 3 P’s have been great company and inspiration: pottery, poetry, an painting. These days what draws me most is creating rites of passage to assist us in moving our lives through the transformations required by our new and strange post-modern age.”