Celebrate Human Rights Day by making a red hand to advocate for the rights of children.

December 6, 2011 by Mark Koenig, Director of the Presbyterian Ministry at the United Nations

The wolf shall live with the lamb . . . and a little child shall lead them. Isaiah 11:6

They stand in stark contrast to Isaiah’s vision: images of children with guns strapped to their backs; children engaged in military drills; children with vacant expressions; children who have been repeatedly abused sexually. We have come to know these children as “child soldiers.”

It is hard to know exactly how many children are affected. UNICEF estimates that 300,000 children are involved in armed conflicts. Often these children have been forced into service or abducted. In some instances they have “volunteered” for economic reasons, to seek revenge, or in response to family and peer pressure.

The NGO Working Group on the Convention on the Rights of Children and UNICEF held a symposium to address the issue of children in situations of armed conflict in Cape Town, South Africa in April 1997. The Cape Town Principles, adopted at this symposium, define a “child soldier as “any person under 18 years of age who is part of any kind of regular or irregular armed force or armed group in any capacity, including but not limited to cooks, porters, messengers, and those accompanying such groups, other than purely as family members. It includes girls recruited for sexual purposes and forced marriage. It does not, therefore, only refer to a child who is carrying or has carried arms.” 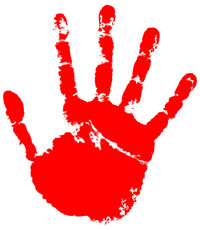 Over the past three years, acting in the spirit of Jesus, Presbyterians have worked to address the situation of children in armed conflict through participation in the international Red Hands Campaign, which collects red hand prints or cut-outs and sends them to political leaders who are in a position to stop these atrocities. Presbyterian Red Hands have been sent to permanent missions of United Nations Member States with the message that “Children are children, not soldiers!”

The Red Hands campaign seeks to build an international consensus that will protect the rights of children in situations of armed conflict. It asks States to sign and ratify the Optional Protocol to the Convention on the Rights of the Child on the involvement of children in armed conflict.

Since Presbyterians became involved in the Red Hands Campaign, 11 States have ratified the Optional Protocol. The consensus is building! However, over 50 States still have not ratified.

Presbyterian Red Hands are sent to those States. Learn how you can take part!  Each Presbyterian who makes a red hand is a human rights worker.

Each treaty, including the Optional Protocol to the Convention on the Rights of the Child (on the involvement of children in armed conflict) has a committee of experts that monitors implementation of the treaty provisions.

Does ratifying a treaty mean that a State will automatically enforce its provisions? Of course not. But it establishes an international standard. It makes possible prosecution of those who violate the provisions of the Convention on the Rights of the Child or the Optional Protocol in the International Criminal Court.

The Convention and Protocol are having an impact! Recent reports indicate that a Central African rebel group has agreed to release an estimated 1,500 child soldiers. In addition, officials in Somalia’s transitional Government have recently agreed to start a process to end the recruitment and use of children in the country’s armed forces. UNICEF and other programs are involved in the challenging task of disarming, demobilizing, and reintegrating children who have served as soldiers back into their communities.

State by State, the consensus builds. Red hand by red hand we move toward the day when children are indeed children, not soldiers.

Looking for another human rights action to take?

The Role of the PC(USA) in Ending the AIDS Crisis

Who Gets to Speak

Indigenous Voices at the United Nations