This article was originally published as an Op-ed in the Presbyterian Outlook on January 10, 2010. It is reprinted in this issue of Unbound with permission, with an invitation for the reader to reflect on how we have and have not lived into visions from the past. Look for further reflection in Dr. Iosso’s upcoming Closing Editorial.

Well, the folks in the General Assembly Mission Council [Editor’s Note: Now the Presbyterian Mission Agency – PMA] have helped foster the talk. But the GAMC has also been pouring their effort into a planning process for enlarging, empowering, and extending our work for the next five years in Presbyterian international partnerships in mission.

World Mission ministry leaders and colleagues from other sections of GAMC are considering and writing on a future for the mission effort. Factors they identify as impacting such plans include, but are not limited to, climate change, resource wars, secularization and new religious movements, economic and other forms of globalization, and views of the United States.

The main question: Where can the Presbyterian witness be most strategic and most helpful to our partner churches?

As a participant in that celebration from another part of the GAMC, I was impressed at the combination of grassroots and central analysis going on in that unit. Some contrasted it with the Big Tent event with its multiple constituent bodies; reports from that event have been positive as well. The World Mission unit is using a “big tent” strategy, bringing in or keeping in those with “progressive” as well as those with “conservative” approaches to mission. Not all agree on how to work with partners in other countries and with other religions. For example, some may define the mission field by its needs and the “missionary” by what we have to give, whether it be a new evangelistic approach or a new technology. Others emphasize solidarity and concern for human rights and other freedoms as integral to the faith we share.

The World Mission “big tent” encourages friendship and mutual respect among the different mission strategies, based on the common motivation of service to Christ. International partners were present, as were mission co-workers who had been preaching in most of our presbyteries. Everyone is aware of funding issues and affirming of the direct mail approach that accompanies the emphasis on personal connections by mission personnel. In this way we are going back to the direct solicitation approach long used in the church before the 1970s, as well as to the personal contact or “prayer letter” approach also used by many independent mission groups. (This approach may seem new to some and may still have kinks in it. We always have to improve relationships as well as communications). 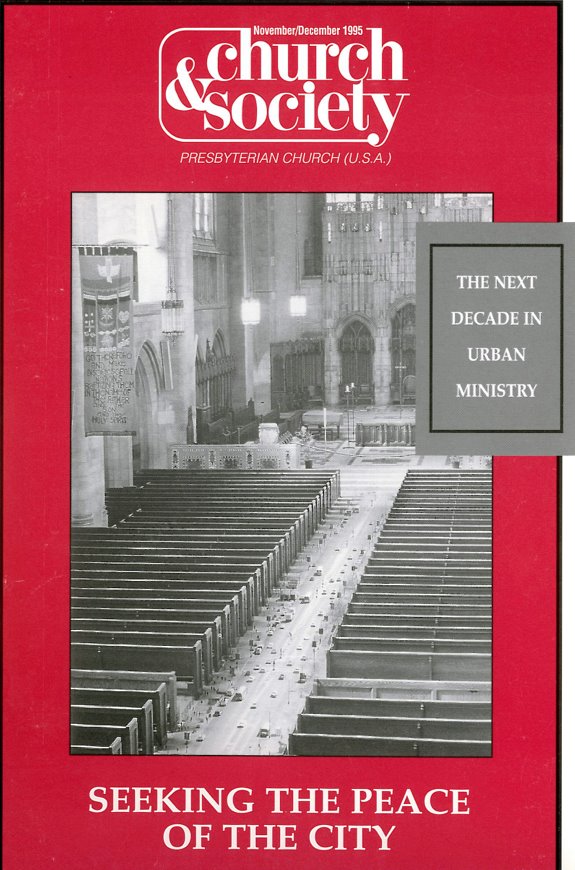 Contrast the holistic focus on world mission with what was once “national mission,” and even before that, “home mission.” In the former United Presbyterian Church there was a national (and not simply Northern) approach that included rural and urban mission to areas of the country and populations not previously Presbyterian. The development of the Program Agency was a theological statement about our nation being part of the world and vice versa. It took some of the good thinking of the Commission on Ecumenical Mission and Relations and sought to do two-way mission in all spheres. At the same time, that 1972-3 re-organization de-centralized in a big way, putting major resources (much from National Missions) into the synods based on the vision of a six-million-member church. The synods were to do and fund mission at the most appropriate level, though current efforts to eliminate synods suggest that effort at de-centralization failed. (There are various forms of de-centralization, of course.)

Subsequent re-organizations and the move to Louisville have bundled, de-bundled, and re-bundled the national offices of the church in different ways. Presbyterians may disagree as to the effects of the move and re-organizations on our international and ecumenical relations, but there is widespread consensus that the denomination suffers from a low profile that is linked to weaknesses in our vision and leadership. How much unity or disunity does our system create? How does the General Assembly, our central symbol and experience of unity, relate to our programs, and how do the six mission agencies relate to the congregations and presbyteries, especially if the role of synods is weakened further or eliminated?

Looking at the church itself, what we seem to have become is a suburban archipelago, a far-advanced case of the “suburban captivity of the church” analyzed by Gibson Winter in the 1960s. Our city and rural congregations especially have atrophied and our pastoral leadership is often dependent on income from spouses, like many in the squeezed “middle class.” Our worthy plans to grow among racial-ethnic minorities seem over-ambitious, even as tailored programs work in some areas. Our demographics make growth among the young more difficult, especially with the phasing out of many campus ministries. What remains, then, is a network of suburban churches. And even in this archipelago, it is hard to be a middle class church in a more class-driven society, despite the efforts of the new administration (or, when there is less and less of a middle class).

My hope for the next 10 crucial years is that we try to think back as well as forward to a Presbyterian “national mission,” perhaps making that a theme for “big tent” thinking and renewing our vision as a church. The grain of this idea originated, in fact, with a person of more historical memory than mine. Greater unity or centralization is not always a better strategy when one is in a minority situation overall, but a unified way of looking at our nation may help us revisit our “down-sizing” and “right-sizing” strategies. In what ways are we still a national denomination, or should we be? In what ways have we never been one?

A national mission vision would answer this question: What are the best ways for the General Assembly agencies to complement the presbyteries and congregations? “Missional” thinking seems generally congregational in emphasis, as in the proposed new Form of Government, but is de-centralization always wise? Ecumenical thinking has become enormously cautious, even as the need for mainline Protestant “critical mass” and cooperation with the historic African-American churches seems so clear in many areas. Technological thinking celebrates new forms of marketing, at a time when we need to shift away from unlimited consumption to re-build communities. Where is the church in these theological and cultural trends?

Every part of the General Assembly structure is looking self-critically about how to do better what most needs to be done. Priorities and goal setting are the bywords. At the same time, the framework of national mission would help inventory what previous functions were aspired to, and which have already been triaged out. This is not to argue that had we kept “national mission” we would have more presence in rural and urban areas, but it is to urge that we analyze carefully what the synods were designed for before we dismantle them further. A good look at “national mission” cannot be done simply by Louisville, though the General Assembly Mission Council would clearly be the body to coordinate the effort (as you might guess I would say!). Synods, presbyteries, and seminaries have essential analysis to provide.

If nothing else, the GAMC needs to plan on the basis of a morally-engaging vision of what it is to be Presbyterian. The General Assembly’s deliberative and connectional role needs to be complemented with intellectually substantial planning convened by the Council. As the social witness and evangelism split is being overcome among younger people, a Presbyterian voice is still needed — and it needs creative vehicles and national symbols, as well as the sense of direction that comes with leadership and vision.

May we not only have those gifts, but a game plan to carry out across our country.

*Sending this is prompted by the death of G. Daniel Little, former General Assembly Mission Council director who first served in the Board of National Missions.

The Missional Church: The Church Catholic