As the Presbyterian Church (U.S.A.) begins a process of discernment on whether to embrace nonviolence officially, the Presbyterian Peace Fellowship convenes peacemakers from across the church.

We Presbyterians know all about miracles—
they happen in committees.

This particular miracle begins a few years ago, when some dreamers in the Presbyterian Peace Fellowship (PPF) began imagining what it might be like for the Presbyterian Church to really discuss the issue of war theologically. Warfare has drastically changed in this century, and Just War theory—the concept that war can be justified if it meets the right criteria—seems less and less helpful in determining how Christians should faithfully respond to violence in modern times. “What if,” these dreamers thought, “rather than yelling at each other every time our denomination wrestles with taking positions on particular wars, we instead took the time as a church to really think about this, talk about this with each other, and discern God’s voice?”

Those dreamers shot for the moon: an overture to the General Assembly asking all of us to consider moving away from Just War Theory and embracing nonviolence. They thought it was just a dream. In a denomination that has for generations operated under Just War theory, passing an overture considering becoming a peace church probably would take a miracle. “It will never pass, but at least the church might talk about it.”

But it did pass.

At the 219th General Assembly in 2010, a miracle occurred. The overture was actually strengthened by its committee, and the General Assembly voted to undertake a six-year discernment process to “seek clarity as to God’s call to the church to embrace nonviolence as its fundamental response to the challenges of violence, terror, and war.”

But there is a lot of work ahead. If the PC(USA) is going to step into the call of this action of the General Assembly and the possibilities it presents, it is going to take a real grassroots movement. That’s where the PPF comes in.

On April 26-29, we’re hosting a gathering of peacemakers from across the church to take up this task. What might the PC(USA) look like as a peace church? How can we help this conversation happen? This “Convocation of Peacemakers” is a working meeting to pool our gifts, dream big together, and take real action for a more peaceful world. Experts and seasoned activists will work alongside rookies and people who aren’t sure they identify as “peacemakers” or “activists.” You’re invited to be part of this (and scholarships are available)—come ready to work.

This “peace church” conversation is only part of the package. The PPF—a small organization composed almost entirely of volunteers—actively works on some of the most critical issues of our time, and we’ll be  continuing to plan next steps at this event on these issues:

It is an exciting time. For every heartbreaking news story we hear, there are many small groups of committed citizens, thoughtful activists, and people of faith working together to be the bearers of small miracles. The most amazing things happen when the people of God gather to work together.

Hope to see you in April.

Learn more and register for the 2012 Convocation of Peacemakers here. 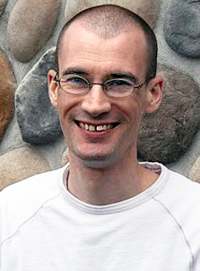 Matthew Black serves as Website Development Manager for the Presbyterian Peace Fellowship and the Council for a Parliament of the World’s Religions. He is also a singer/songwriter, worship leader, alumnus of the PC(USA)’s Young Adult Volunteer Program, and graduate of McCormick Theological Seminary. He lives in an intentional community in Chicago.
Share this
Tags:

A Prayer for Unbound