An Unbound editorial by Chris Iosso 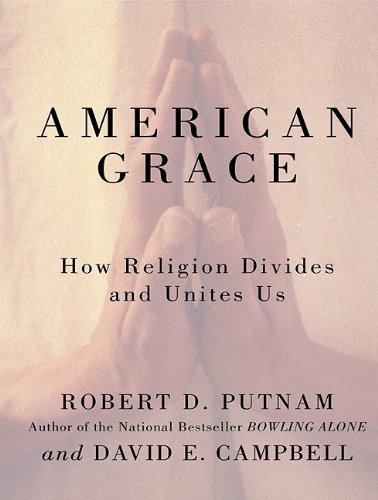 Robert D. Putnam, the Bowling Alone author and social scientist, spoke recently in Louisville, KY, hosted by several churches and a temple. His book, American Grace, co-authored with David E. Campbell, has been out since 2010, but the book’s message has yet to sink in. Their subtitle, How Religion Divides and Unites Us, is no chiasmus, but points to a chasm between Right and Left in American religious life. The chasm was opened up first by the sexual revolution of the late ‘60’s, then by the reaction called the Religious Right, and now by young people reacting against the political power of conservative religion. The chasm is overcome on the personal level by a surprising amount of tolerance, an American grace, but such tolerance may mean little for the mainline church or social justice.

This editorial will summarize the American Grace argument and identify some of its implications for justice-oriented faith. Just to state one of the biggest at the outset: if young people find the “Church” most intolerant on issues of sexuality and gender, should the PC(USA) and other mainline bodies not be clearer about their support for gay and lesbian people, rather than moderate their views and continue to be lumped negatively with “religion?” And even if young people are more turned off by hypocrisy than turned on by justice, should churches not try to give more of a justice vision and identify themselves more strongly with a greener and more egalitarian future? If not, the real danger Putnam and Campbell point to is that baggage from the Religious Right will continue to erase our witness in a shallow and reactive culture.

BASIC POINTS IN AMERICAN GRACE
Putnam and Campbell show that the “God Gap” is growing and that young people, especially mainline Protestant and non-Hispanic Catholic children, are leaving the church in droves, driven by the perception that religion equals intolerance.

The authors condense much of their argument in a recent article in Foreign Affairs, summarized as “how the Tea Party undermines religion in America” (March/April 2012). Their data shows that the Tea Party consists of mainly Religious Right Republicans distinguished, not by love of small government, but by the desire for religion to shape public policy. Both book and article maintain that “mixing religion and politics” is bad, suggesting that the right wing approach is virtually the only model for religious influence.

One basic challenge for Christians (and others) seeking to honor the common good in governance is that Putnam and Campbell’s broad brush against “politicking from the pulpit” comes close to approving the idea that pulpits should go silent on political matters—unless we act like an idealized Martin Luther King Jr., who “drew on powerful religious symbolism that could not be reduced to base partisanship” (FA, 91:2, p. 43). At the time, of course, MLK was gunned down in a time of considerable partisanship.

This view that the church should stay out of politics reflects a reaction to the conservative right and represents a popular perception among many moderate and liberal Americans. As the mainline and liberal Christian traditions have increasingly yielded the public square to more conservative and intolerant forms of Christianity, Americans have forgotten the constructive force the church can be for justice and liberation (which, incidentally, are far more substantive than mere civil tolerance). The authors succeed in showing that people’s spiritual or religious positions are often reactive, to politics and the media in particular; there may be other pre-dispositions and trends at work as well.

Prior to the sexual revolution (which Putnam and Campbell consider much more disruptive than the Civil Rights and Anti-War movements), Democrats and Republicans were both churchgoers in similar proportions. Most U.S. movements for justice had come, in fact, with a Protestant Christian component: Quakers and others on abolitionism and prison reform, the Second Great Awakening stimulating all kinds of social reform (universal education, abolition of slavery, prohibition, and attention to mental illness and physical disabilities, just to name a few), the Social Gospel movement responding to industrialism and the turn-of-the-20th Century Gilded Age, and then frequent Christian leadership in civil rights, feminism, and environmentalism. Vatican II Catholics joined in the latter three, and some have kept a strong anti-war witness, though the traditional strong Catholic support for labor has somewhat waned.

In the 1970’s and 1980’s, however, evangelicals and conservative Catholics became united in their negative responses to cultural excesses, particularly in the sexual realm. Until 1990, the Evangelicals were growing overall, and, compared with the more moderate and liberal congregations, their numbers stayed strong. This was perhaps reinforced by their political visibility in the form of televangelists and the Religious Right, which continued to grow in influence. However one feels about the development, the 2012 Republican Party primaries especially reveal a conservative Christian base. Yet among the young, the rise of “none of the above” on religious surveys was strongly increasing, from traditional numbers like 5-10% to numbers like 25-30%.

In properly assessing these trends, many factors have to be considered: new media, family structure changes, rates of reproduction and education (generally inverse), economic pressures (understated, especially in relation to women in the workforce), and the declining significance of ethnicity—except to the African-American churches, Hispanics within Catholicism, and the Mormons, who function somewhat as an ethnic group. Ethnicity, immigration, and, to a lesser degree, geographic mobility had encouraged people to join religious communities in the past, but now (as many others have noted) religious and ethnic boundaries among Christians, Jews, and others are breaking down. The upshot:

One result of all these changes is that individual choice has become virtually as important as inheritance in explaining Americans’ religious affiliations, raising the stakes for religious marketing and innovation… A second implication, perhaps less obvious but more important, is that Americans now live in a more religiously integrated society (p. 160).

By “religiously integrated,” the authors mean that, with the waning of ethnicity and tradition generally, hot button issues began to play a larger role in how people defined themselves. Though factors like respect for science, social location, or residual racism remain important factors, and though most Americans are more accepting of women in more occupations, abortion and homosexuality have become markers of the dominant—conservative—picture of religiosity. “Beginning in the 1980’s, sex and family issues—which had long been aligned with religiosity—also became aligned with positions taken by America’s two major political parties. As a result, religiosity and partisanship came into alignment” (p. 387-388). The authors hasten to note that most Americans are not grouped on the extremes on abortion, though the division is stronger for attitudes toward homosexuality. But they find that politics is influencing people’s religious positions more than their religion influences their politics as each issue connects to a larger worldview.

Peace Church Beta: What if we left Just War theory behind?

A Reason to Hope, Again

The Advisory Committee on Social Witness Policy (ACSWP) is pleased

In May of 2019, the Advocacy Committee for Women’s Concerns