Race is a word that points to massive dividing lines in the US (and elsewhere). Lake Woebegone is a fictional creation of a gifted radio storyteller, Garrison Keillor. Among Keillor’s strengths are his knowledge of the mainline church in small towns and his genuine affection for the folks in whose everyday customs he finds humor. Covered dish suppers with exotic jello salads come to mind. Some musical critics of Keillor suggest that he stretches his vocal range when he joins the singers on his Prairie Home Companion, but I am generally a fan. The analogy I want to pursue is that churches in our many Lake Woebegone communities don’t have the racial range. We are often very aware of this when we try to sing new hymns from different traditions in our hymnals, but the point is that those of us who are white mainliners must stretch our range. If we take those steps, we may be pleasantly surprised to see who and where the Prince fans are, even in the whiter reaches of Minnesota.

Particularly if we are over 50 like Keillor, we in the white majority may joke about our different European names and ethnic backgrounds—differences our ancestors fought wars over—and we may kid about our different church traditions, but we don’t much joke about race. Think of Marilynne Robinson’s fine books set in rural Iowa—her characters don’t even talk about it sometimes when racial difference is near at hand, dividing generations in single families. When writing about race, this white writer (at least) has to acknowledge a limited range. The violence and vulnerability, indignity and hatred that people of color experience even from law enforcement; this range is not part of my personal experience. We have heard about some of it in the articles in this issue.

But this is not another exhortation for us white church folks to do better at outreach, inclusion, or diversity. It will be a look at how we—the majority-but-not-all-white Presbyterian Church, have tried to do what the 2007 Women of Color consultation called, “singing new songs to God.” Brave Presbyterians (and others) have been trying to do that throughout our history and in both of the churches that were split for 123 years over slavery, though I will not attempt to track all the moments and schools of conscience before the civil rights movement. But we do need some history to reclaim some of the creativity amid conflict that was part of the 1960s and 1970s when the churches started their racial justice offices, program investments, and policies on representation.

Denise Anderson is right to point to the ambiguities of the racial justice programs in largely white denominations. We have learned some things about white privilege and “insidious” white supremacy and internalized racism and hybrid identities since those offices were developed. Yet even then, as institutional racism was being named, understood, and challenged, groups of black, Hispanic, Native American, Asian, and white Christians were modifying and creating new institutions within the old. We still need those prophetic offices and commitments to diversify.

The recent controversy over Woodrow Wilson’s legacy may illustrate the divided selves of white mainline Protestants, progressive on many issues of justice and peace, blind and even callous on matters of race, and perhaps self-righteous on both. Theologically, on the issue of race, even well-intentioned white activists are “simul justus et peccator,” both justified and sinners. The articles by Sung Yeon Choi-Morrow and Chris Burton bring this out clearly. And the question is why we, as a church attempting “reconciliation,” always seem to be going one step forward, one step back, semper reformanda, semper un-reformanda. Why is this work of anti-racism always “unfinished business?”

To give a quick internet answer, white amnesia and guilt are intertwined and were reinforced by the significant redirection of the US government in the 1980s. This redirection, which a 1981 General Assembly study paper called, “The Re-Making of America,” effectively limited social imagination as well as government’s ability to respond to economic change in creative ways. That means today a lot of stagnation and segregation remains untouched or even intensified through the de-industrialization of the 1980s, the tech boom of the 1990s, the intensification of globalization in the 2000s, and the lack of significant public investment in anything other than war since.

In the aftermath of 9/11/01, human security got re-defined as “homeland security,” national security doctrine mixed with tribalism. Economic productivity eroded—military fixations and bank bailouts can be big ticket items—and the stagnation of most incomes reduced social mobility, keeping large proportions of communities of color in poverty. It is a story for others to write, but the civil rights organizations that survived depended upon middle class adaptation and skilled legal strategies, even as Black Lives Matter today takes different approaches to challenge the continuing dominance of white power and culture. 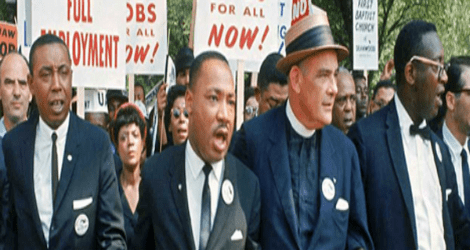 In the upcoming General Assembly issue of Unbound, we will identify almost 10 items coming before the Assembly related to various aspects of anti-racism. Understandable, especially in a political climate that was already polarized before anti-immigrant and anti-Muslim rhetoric was whipped up. Commissioners at the Assembly will need to weigh how much work needs to be done within the church itself and how much should be focused on the communities, local, regional, and national, where the church lives. And how much awareness of racism can be applied to the grinding wars we are still fighting overseas, with devastated countries awash in weapons? One virtue of that late 1960s to early 1970s period was the linkage, most clearly in King’s ‘Breaking the Silence’ speech of April 1967, when he called out racism, materialism, and militarism in the discrimination at home and Vietnam war abroad.

Gayraud Wilmore, whose interview with Curtis Jones we reprinted in the first week of this issue on Church and Race, was in fact the first director of the Commission on Religion and Race (CORAR), empowered to act on behalf of the church, starting in 1963. In another Church & Society issue, one devoted to the first United Presbyterian Church Black Moderator, Edler Hawkins, Wilmore writes of how the CORAR funds paid salary for one of King’s lieutenants, and other monies went for legal defense of protesters. Nora Leccese is right to remember Eugene Carson Blake’s arrest desegregating a Baltimore amusement park in 1963—an activist Stated Clerk, though Wilmore and Hawkins helped him get there. Later, faced with an international form of the “Black Manifesto” for reparations, Blake helped form the Program to Combat Racism of the World Council of Churches, often controversial for providing humanitarian aid to liberation forces in Southern Africa.

The fact is, black and white church leaders were developing organizations and programs to end racism well before James Foreman was given time to present his Black Manifesto to the 1970 Assembly (accompanied by several Black Presbyterian leaders). As early as 1965, conversations began about investing in cities that led to the inauguration of the Self-Development of People grant program (SDOP) in 1970—a program that is still going today. Earlier, in 1968, the General Assembly authorized the incorporation of the Presbyterian Economic Development Corporation, known as PEDCO. Intended as a vehicle for investments and loans in redlined areas and minority-owned businesses, the amount allotted from unrestricted Presbyterian Foundation funds approximated $14 million. Much was risked with firms that needed more technical assistance than could be provided. These institutional efforts began before the public initiative for reparations; mid-1960s conversations about self-determination, Black Power, and separatism rather than integration were also part of that context.

Around the same time as PEDCO and SDOP were getting started, the Presbyterian Church and three other majority-white churches published a booklet, “The White Problem (1970),” confronting elements of what we now call “white privilege.” The UPC had developed curricula to look at “Race and Repression” before the 1971 General Assembly fought over legal defense grants to the Black professor, Angela Davis, who was accused of aiding revolutionary violence. Black Presbyterian pastors paid back all the costs of the Angela Davis defense contribution, but many condemned that concern for an unequal justice system long afterward—and the justice system arguably got more racialized after the church’s voice was quieted. These and other projects are largely forgotten, like the Black colleges that “we” also used to maintain. If our church again tries to become more inclusive and contribute to racial justice, we (the whole church) need to consider what prices we are willing to pay to stand with those who are oppressed, whether we call it reparations or not.

Whether or not we keep symbols of our divided heritage like Wilson, the problem of race for the Presbyterian Church (U.S.A.) is inextricably linked to segregation—in housing, in education, in economic life. Separate is not equal—to quote Brown vs. Board of Education—and separation generates racism, conscious and unconscious, always pulling the church and culture backwards. Those economic efforts mentioned above and concepts like empowerment were intended to break open ghettoes and to accompany judicial decisions oriented toward equality. The turn of many courts, Supreme on down, against race-based remedies for systemic discrimination has added to the intractability of race, hamstringing government capacities to help balance the power of the (mainly white) 1%.

So the bottom line is opposing segregation in all its forms. The organizing creativity of the 1960s and 1970s was accompanied by serious educational efforts within the churches and serious ecumenical action. Jesus Christ was seen as both Reconciler and Liberator. Yet the economics of class separation pressed replay on racial segregation, leaving our politics and even our churches open to emotionalism and resentment. My prayer is that the mainline church can find its full moral range again and push back against the nostalgia and deception that would make us truly a nation woebegone if they should succeed.

AUTHOR BIO: Chris Iosso is the general editor of Unbound. This editorial, paired with Ginna Bairby’s initial editorial, carries our practice of giving contrasting generational and gender voices to our topics. A graduate of Johns Hopkins University, Princeton Seminary, and Union Seminary (NY), Chris lived in majority Black and mixed areas during both his undergraduate and first seminary degree years in Baltimore and Trenton, NJ. While earning his PhD at Union, he taught courses in Sing Sing prison for four years. These experiences helped a young white minister from the 1970s suburbs understand a little more about the struggle in which the mainline churches of the 1960s had invested so much, a struggle that so much needs continuing. And yes, when Prince died, he was surprised at how many of that Minnesota musician’s songs he knew.

Friends in the DC/Baltimore area:

Some of you may already be aware of an important conference in DC next week, simply one of the largest collection of social change agents in one place in a long time for analysis and strategy: https://www.breakingthroughpower.org/a-pioneering-civic-ma…/ If we look at electoral politics and worry, the historic strength of Public Citizen, the PIRGs, and many other effective organizations has been organizing and advocating for fairness and protecting people, “in season and out of season.” The 85 leaders and thinkers taking part in 4 days next week are gathering to join Ralph Nader on the 50th anniversary of his starting a new kind of consumer advocacy. Some are veterans of his various spin off organizations, though most are not.  I encourage you to check out the line-up on any of the four days (you can go a la carte). Please forward this to folks who might be interested, and be aware that they are planning to have many younger people present, some by scholarship (though the per day cost of $20 is very reasonable).