“Blessed are the peacemakers, for they will be called children of God” (Matt. 5:9). Humanity, Scripture tells us, has been made in the image of God. Jesus was recognized as the son of God. Central to the notion of being “sons and daughters of God” is that of being a peacemaker. Peacemaking is the mark of our identity and the nature of our vocation (II Cor. 5:19).

The catalyzing agents for this vocation and mark of identity are the conflicts that emerge from a deficit of peace. This happens within communities; it is seen in the inequities of the market place; it is found in the failure to live in balance with the earth; and it comes in the conflict among peoples. These four trajectories of conflict emerged in the analysis of the International Ecumenical Peace Convocation (Jamaica, 2011). They were seen to be the agenda for Just Peacemaking in the twenty-first century. As peacemakers engage in these areas, they work out their identity as “sons and daughters of God.”

This is the essential message of “Risking Peace in a Violent World: Affirmations for Presbytery Consideration.” Churches and Christian people, along with others, have a history of working for peace. Some of the markers that plot the way along a path toward Just Peace include: early church pacifism, medieval theories of just war and the monastic “peace of God,” the reforming pedagogy of Lutheran Philipp Melanchthon that all education should be characterized by a “peace agenda,” the Quaker idea of a “Peaceable Kingdom,” the work of the Fellowship of Reconciliation, Initiatives for Change, and the Civil Rights movement. In the aftermath of World War II, Christians and their churches were involved in the formation of The United Nations (1945) and The Universal Declaration of Human Rights (1948) to ward off the scourge of war and abuse of humanity. The formation of the World Council of Churches (WCC), founded in 1948, was to be a prophetic voice in this effort.

In the wake of the WCC’s Decade to Overcome Violence (2001-2010), culminating in the International Ecumenical Peace Convocation (2011), the 10th General Assembly of the World Council of Churches (Busan, 2013) took up the challenge, together with the churches, of working out the theological and ethical challenges of Just Peace. They diligently drilled down beyond pacifism and just war theories of conflict engagement for what it means in the twenty-first century to be peacemakers, to find the mark of our identity as children of God. Just Peacemaking recognizes that practices of justice are intimately related to peace (Psalm 85:10). Together they make real the shalom envisioned by prophets and teachers – and by Jesus.

The five affirmations for presbytery consideration in the report “Risking Peace in a Violent World” are the occasion for the distillation of identity in the twenty-first century. Those affirmations are:

These affirmations come in the wake of significant reflection by those in the churches. The Just Peace principles and practices which they espouse now call for meaningful engagement. They also demand intense reflection on the part of all of God’s people when it comes to issues of deep community and thoughtful ethical engagement against a horizon marked by forgiveness and covenantal promise. These considerations are framed in global theological reflection as questions of ecclesiology, ethics, and eschatology.

The five affirmations also challenge questions of Christian formation in our churches, schools, and seminaries. I am glad to say that Presbyterians do not face this challenge alone. We are setting out on an exciting venture together with other Christians. Again, at the last assembly of the World Council of Churches, this same task was addressed in the affirmation that the churches give more attention to the question and nature of theological education in local as well as global settings. The fourth affirmation in the ‘Risking Peace’ report draws attention to this. 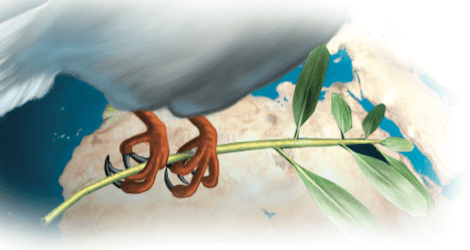 We live in a world where globalization promotes a desire for integration yet often ends in division. Through post-modernity, we are made aware of forms of knowing that transcend propositional truth and can alert us to human complexity. Technology fosters direct sourcing but also informs information overreach as with the U.S.A. NSA scandal. Social fragmentation happens and brings forth conflict from which arises new understanding. Clashes of cultures, religions, politics, and social and economic interests leave a legacy of hurt and grievance. Evident imbalances of power have contributed to both a heightened enmity, as seen in increased global terrorism, but also contribute to deeper humane engagement, as can be seen in the Millennium Development Goals and the post-WWII explosion of humanitarian development and aid.

Disciples of Christ and their churches find their mark of identity in the midst of conflict. The five affirmations that Presbyterians at the 221st General Assembly are being asked to consider will shape the nature of our church, its ethical perception in the world, and frame the horizon we leave as a legacy to coming generations.

AUTHOR BIO: Rodney L. Petersen, Ph.D. is former executive director of The Boston Theological Institute (BTI), now director of Cooperative Metropolitan Ministries and of the Lord’s Day Alliance in the U.S. He is a research associate in the Center for Global Christianity and Mission, Boston University School of Theology. He was present at the International Ecumenical Peace Convocation in Jamaica (2011) and taught a course on the IEPC through United Theological College of the West Indies. He participated as faculty in the Global Ecumenical Theological Institute (GETI) attached to the 10th General Assembly of the World Council of Churches in Korea. In addition to his work with the BTI, Dr. Petersen has taught in BTI member schools and overseas. He is founding co-director of the Religion and Conflict Transformation program at Boston University School of Theology, teaching in the areas of history and ethics, and he serves on several local and national committees of the Presbyterian Church (USA). He is author or co-editor of numerous publications, including Formation for Life: Just Peacemaking and Twenty-First Century Discipleship (Wipf and Stock, 2013); and Religion and Public Policy: Human Rights, Conflict, and Ethics (Cambridge University Press, 2014).

Read Item 11-11: “Risking Peace in a Violent World: Affirmations for Presbytery Consideration”, the report of the Peace Discernment Committee.

Read more articles from The Road to Detroit: Issues of Social Justice Before the 221st General Assembly!

Stewardship of Influence for Congo

This Time Around: Urban Ministry in the PC(USA)

Stewardship of Influence for Congo

As I entered the scene, it felt like I was standing on

Reflection on the 60th Anniversary of Brown v. Board of Education