At the direction of the General Assembly, we at the Office of Public Witness have compiled resources to aid individual church members and congregations understand the mechanics of our democracy and reclaim the values and the promise of our electoral process. This resource can be used individually, with a church study group or class, or as a source of sermon ideas. We intend this guide to explore the links between our call as Presbyterians to public witness and our responsibility as Americans to demand free and fair elections. Unlike voting guides that list legislation to support or oppose, we seek to summarize history and practice in order to elucidate systemic patterns that need to be changed.

We draw on U.S. history, Presbyterian Social Witness Policy, Scripture, and other resources to focus on the gradual and uneven recognition of members of minority groups as full voting members of society. We recognize that these matters can be frustrating and fraught with seemingly unnecessary complexities. Nonetheless, we invite Presbyterians to step into this challenging place, and we at the Office of Public Witness hope we can help facilitate that conversation. This study guide seeks to encourage real dialogue in our congregations and communities about the lasting impacts of segregation and the ongoing struggles for equity for women, people of color, and other minority voters.

[…] In the 2008 PC(U.S.A.) Social Witness Policy Lift Every Voice, the Presbyterian Church called on this country to enforce the Voting Rights Act and to protect people and communities of color, women, the young, people with disabilities, and the elderly from targeted purges of voting lists and other forms of disenfranchisement. [1] This policy equipped us with much needed prophetic language and practical ideas, yet in 2013, our country entered a new era of voter suppression marked by different tactics than in years past but yielding the same dangerous outcomes. The Supreme Court decision of Shelby vs. Holder in 2013 reinterpreted the Voting Rights Act, limiting the ability of the federal government to review new voting laws put in place by the states that jeopardize minority voters. Since that decision suspending “pre-clearance” review by the Justice Department, states have passed voting laws that have the practical effect of discriminating against minority communities. [2] In an already partisan political climate, voting rights themselves should not be a partisan issue. Rather, they are the very foundation of democracy, and if free and fair elections are under threat, then so too is our national identity. Recognizing this, the 2014 General Assembly called for the 2008 policy to be updated and for the Office of Public Witness to provide a resource for study and action.

Respect for the conscience of the individual anchors Presbyterian reverence for the right to vote for everyone. Public service is seen by us as a high calling, and government itself a servant and agent of the people, accountable to all citizens. Politics as public decision-making has an ethical purpose and benefits from laws that prevent corruption by special interests against the common good. Weakening the rights of citizenship for some and unfairly enhancing the power of others distort the practices and legitimacy of democracy. As a Reformed Christian church, understanding God’s covenant to have been opened by Jesus Christ even to “the least of these,” the Presbyterian Church (U.S.A.) seeks to live out and witness to its values of love and justice in the public sphere. [3]

The systemic approach of denying minorities the right to vote has long been against our expressed ideals as Presbyterians. Beginning its post-war civil rights commitment in 1947, the Presbyterian Church, U.S. (PCUS) Assembly opposed all organizations and individuals who aim to hinder any minorities on the basis of creed, class or color. In 1956, the United Presbyterian Church in the U.S.A. (the more national, “Northern” church) called upon Christians to work to eliminate the poll tax “and other restrictions which prevent many citizens from exercising their legal rights at the polls” (Minutes, UPCUSA, 1956, Part I, p.235; see also Minutes, PCUS, 1957, Part I, p.194). In 1965, the PCUS affirmed the historic Voting Rights Act saying, “The basic purpose of the civil rights movement should be to obtain for the Negro—and of course, for all minority groups—justice in affairs of daily life and the right to respect as human being under the redemptive concern of God. Jesus, by His words and life, calls us, as his followers, to support him in the struggle…” (Minutes, PCUS, 1965, Part I, p.159). These and other statements were not easy to make and are worth remembering as that struggle continues in new forms.

Because the issue of voting rights is so deeply tied to the history of racism in the US, this course of study is intrinsically connected to the Presbyterian Church (U.S.A.)’s vision of becoming an antiracist community. This provides us with the theological, cultural, and political framework for resisting oppression and working to overcome racism within our own life as well as in the broader society. It means combining social analysis, institutional reconstruction, and individual healing with discernment, prayer, and worship-based action. This resource does not address all of the dynamics that restrict electoral reform, including partisan redistricting (gerrymandering) and distortions caused by the electoral college and inaction by the Federal Election Commission. But it does look at shorter term remedies and potential legislation that could restore voter protections intended in the original Voting Rights Act of 1965. We encourage readers to formulate your own ways of engaging this topic based on the realities of your congregations and communities, and to reach out to the Office of Public Witness if we can be of further assistance.

Part One – The Current Crisis

On June 25, 2013, the Supreme Court cut the heart out of one of the most important pieces of legislation in the 20th century, the Voting Rights Act. On paper, the court ruled that a coverage formula in a provision of the Voting Rights Act was unconstitutional because it was outdated. This provision required jurisdictions that had a history of voter suppression, primarily of preventing African Americans from voting, to submit any potential new voting laws to the federal government for review. Striking sections 4b and 5 from the Voting Rights act suspended the federal government’s proactive power to protect the rights of minority voters (after the fact complaints may still be filed). That decision will continue to distort the outcomes of elections across the country until new legislation can be passed by Congress. 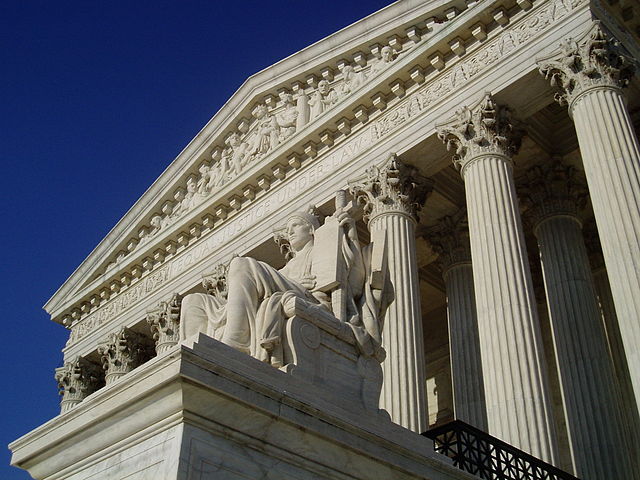 When Supreme Court Justice Roberts read the majority opinion in favor of striking sections 4b and 5 he stated, “The conditions that originally justified these measures no longer characterize the voting in covered jurisdictions. By 2009 the racial gap in voter registration and turnout was lower in states originally covered by Section 5 than it was nationwide… Census Bureau data indicates that African American voter turnout has come to exceed white voter turnout in five of the six states originally covered by Section 5, with a gap in the sixth state of less than one half of one percent.” [4] Justice Roberts took this to mean that the problem of discrimination based on identity was solved; however, longtime voting rights advocates across lines of race, gender, and class saw this precisely as evidence that the Voting Rights Act was working as designed. The turnout data cited may also have reflected the historic candidacy of an African-American. Justice Roberts’ conclusion is indeed a challenge for all Presbyterians to engage at this critical time; have we as a country truly moved beyond the need for protections for minority voters? Have we so thoroughly healed the wounds of racism, of the exclusion of women, of the injustices suffered by people with disabilities and the poor? [5] Even if that were true (which as evidenced in the following text and the world around us, it is not), a democracy should provide ample opportunities for participation, not shrinking windows within which to cast a vote.

One of the primary justifications for new voting laws is to prevent voter fraud. Multiple studies have shown that voter fraud is very rare, voter impersonation is nearly non-existent, and many of the problems associated with alleged voter fraud are actually unintentional mistakes that are made by the voters or the election administrators. [6] According to a 67-page report released by the NAACP in September, 2012, “[w]ith in-person electoral fraud occurring at the rate of 0.000002 percent, an individual is more likely to be struck by lightning than to impersonate another voter at the polls.” The threat of voter fraud seems to have been over-emphasized in order to create a political rationale to pass voter ID laws that ironically pose a far greater threat to our democracy. […]

AUTHOR BIOS: Mara Sawdy is a Young Adult Volunteer from West Newton, Pennsylvania. She is currently serving at the Office of Public Witness with a focus on domestic and environmental issues and Miriam’s Kitchen, as a case manager working with homeless individuals in Washington, DC. Mara graduated from Westminster College in 2015 where she majored in environmental science with a minor in peace studies. Growing up, she attended West Newton United Presbyterian Church, where her grandfather served as a minister for 25 years.

Nora Leccese serves as the Interim Associate for Domestic Poverty and Environmental Issues at the Office of Public Witness. She is an activist and advocate by nature who is deeply committed to racial and economic justice. In her home state of Colorado, she co-founded and chaired the board of a national food rescue non-profit and organized with the fossil fuel divestment movement. She graduated from the University of Colorado with a degree in economics and a focus on community leadership. As an Emerson National Hunger Fellow with the Congressional Hunger Center, Nora researched equitable food systems in Montpelier, Vermont, and served the Office of Public Witness where she focused on criminal justice reform and economic justice.

I Can't Breathe: Showing Up for Racial Justice in Portland

The Crisis with ISIS