Growing up Asian-American and Adopted in a Southern White Church

I was born halfway around the world from the place I now consider home. My life story does not begin in a hospital, like many people’s, but in the Greenville-Spartanburg International airport, where I first met my adoptive parents (or as I call them, my parents) when I was nine months old. I was an orphaned baby girl coming from Seoul, South Korea to my new family.

My parents’ faith has always been a foundation of their relationship, and it grew into the foundation of our family. My father went to Catholic school growing up; my mom describes her family as occasional church attendees. Both of them were saved and had a relationship with Jesus Christ by the time they met. As a young couple, they were active in a church wherever they lived.

When my parents adopted me, they were living in Irmo, South Carolina. I spent my first two years there. I was naturalized at age three in a court in South Carolina. When I was four, we moved to Charlottesville, Virginia, where I spent most of my childhood. Charlottesville was a cozy, Southern town and home to the University of Virginia. My parents had lived in Charlottesville briefly in the 70s and were happy to return and settle down with our new family.

We were part of a large Presbyterian church (PCA) in Charlottesville. My mother soon got a job in the church preschool, and my father joined the deaconate – positions they hold to this day. The church itself was a lively community. It’s ministry extended beyond regular worship into Sunday morning education, weekly Bible studies, a music ministry, and social events for college students, young professionals, and families.

I was actively involved in the church from as early as I can remember. I was a part of Sunday School, youth choir, youth group, and a half dozen mission trips. By the time I was nine, I started reading John Calvin and by twelve, I had moved onto the Book of Church Order. At thirteen, I was baptized as a member of the church and completed an intensive, year-long internship with our youth pastors in high school. My childhood was happy. I felt loved by my parents, my church community, and by God.

Race was never something we talked about in church. With only a few exceptions, our church was led and attended by white people. Our founders were white, and our head pastors have always been white. If you were to speak with people in the church, you would probably hear that they identify only as Christians and human beings; rarely did any of them even think about being white.

I, however, am not white. My identity as an Asian-American person of color growing up in a white church gave me a unique set of experiences. As a young child, I was very aware of race. My experience aligns with many studies of American children that show that by age three, white children express a preference for other white children as friends. By age five, white children group people by race over other perceived identities, such as gender, and children of all races have an expressed white bias, although white children much more.

As I grew older, the question of “what is race?” echoed louder and louder inside my head. At school at the University of Virginia (a majority-white university) and especially once I moved away from Charlottesville, I found myself asking more and more questions about the connection between my white Christian upbringing, race relations and racial justice in this country, and my own identity. This led me to study race, structural racism, and racial identity development, as well as the experiences of other transracial adoptees in predominantly white, suburban, Christian communities. It is with this lens that I return to reflect upon on my early experiences as an Asian-American adoptee in a racially segregated church.

My parents, being the loving and thoughtful people they are, spoke openly about adoption, difference, and my Korean heritage. They assured me that families were made in many different ways and that what was most important was that we loved and cared for each other. They also prepared me for conversations with people who would struggle to understand our family – out of resistance, ignorance, or natural curiosity. For this vocabulary and confidence, I will always be appreciative.

Of course, my identity was a topic of conversation in school. Whether it was the first day of school, when teachers and peers struggled to say the name “Jaime-Jin” (as a result, I ended up dropping the “Jin” from my name for over 15 years), or questions about whose tummy I came out of, or why my face was so flat and my eyes were squinty, the discussion of my race and identity always surfaced. I was teased multiple times a day for being Asian-American. I later came to learn that almost all Asian and Asian-American children are teased in the same ways, often using identical tropes, regardless of what country they are from or where in the United States they are raised. This realization reveals that children’s insults are often more than individual acts of meanness, but reflections of the structural and institutional ways that Asian discrimination is embedded in the fabric of the United States.

In church, I experienced similar teasing, but I noticed an additional layer in the adults’ responses. Adults in church were very insistent in a colorblind analysis of the situation. Statements like, “It’s what’s on the inside that counts,” and “God loves everyone regardless of skin color, and so do I,” seemed wildly naïve to me as they echoed throughout my childhood. I remember wondering if, in trying to be like Christ, Christians were trying to be Christ.

I later learned that anti-Asian-American racism grows from anti-Asian laws that have been rooted in this country since the 1800s along with cultural stereotypes in the media that were designed to exoticise and feminize Asian people. I feel quite sure that my teachers weren’t thinking about the historical context of my experience or the importance of educating their students about pervasive, erroneous beliefs about Asian people during our daily interactions. What they did and said came from their own internalized – and often subconscious – worldviews and belief systems. 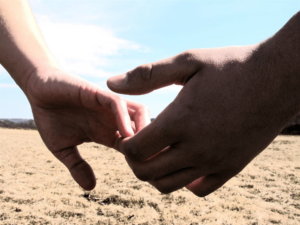 My experience of race is contained within the broader context of racism in the city. Charlottesville is a very racially segregated city, and our church was no different. Reverend Martin Luther King Jr. famously said, “Eleven o’clock on Sunday morning is the most segregated hour in America,” and there was no denying this in Charlottesville. Christianity was the dominant religion, and as such, there were black Christian churches and white Christian churches sprinkled like salt and pepper across the city.

As a child, I remember wondering why this de facto segregation existed, if “all men (sic) were created equal” and “we didn’t see color anymore.” I knew that Charlottesville was built on an economy and culture of race-based slavery, but people seemed unwilling to speak of this history or critically examine the progress – or lack thereof – along the so-called path to justice. As I write today in 2014, slavery has only been illegal for 149 years in this country –  only a few generations – after being a legal, foundational practice on this soil for over 350 years. Our country is only 49 years out of race-based segregation. Which, by the way, means that I would not have been able to attend my church 49 years ago, or 21 years before my birth.

There were beautiful moments of a blending of cultures, like when the white choirs would attempt to sway in beat to the soulful hymns of the black churches. And there were ugly moments when black women would have to pretend to not see white women clutching their purses at the sight of their dark-skinned brothers, husbands, and sons.
___________________________________________

The residue of this history still persists in the Church. Our church would occasionally host a citywide worship service, temporarily integrating the congregations from black churches and white churches. As someone who was neither black nor white, I felt especially tuned in to the ways that internalized beliefs about race – and specifically anti-black racism and white privilege – played out. There were beautiful moments of a blending of cultures, like when the white choirs would attempt to sway in beat to the soulful hymns of the black churches. And there were ugly moments when black women would have to pretend to not see white women clutching their purses at the sight of their dark-skinned brothers, husbands, and sons.

I feel a range of emotions when I reexamine the events of my childhood in all its complexity. Part of me grieves for the brokenness of the church, then and now. Part of me feels anger toward people who willfully remain oblivious to real systems of oppression in their community and, in doing so, perpetuate injustice. Part of me wonders what transformative change would look like.

Overall, I celebrate the love I was shown and the joy I experienced as a child. I honor the positive intentions that surrounded my life. These are the people who made me the person I am today.

I currently live in New York City and run a nonprofit organization that trains teachers to be leaders of racial justice issues in their schools. I moved to New York because this place satisfies a deeper longing I have for connection with other people of color, Asian-Americans, and Korean adoptees, in the faith community. This is a deliberate choice I made. I am not angry or resentful of Charlottesville or my home church, but I recognize and seek to honor the ways in which I still struggle to be my authentic, whole self in that space. My hope for society as a whole is that we will embrace these tough conversations about race, about faith, and about justice in order to interrupt patterns of oppression and engage in a true process of healing. I pray for strength in this shared journey.

AUTHOR BIO: Jaime-Jin Lewis is the Executive Director of Border Crossers, an education-equity nonprofit that equips educators to be leaders of racial equity in their schools and communities. She designs and leads workshops that engage diverse audiences of educators in conversations about race, structural racism, and identity development. Jaime-Jin has trained over 2,500 educators from over 70 schools nationwide. She has been cited in the New York Times, Colorlines, and the Resources in Independent School Education blog, and she serves as a Scholarly and Community Advisor to the Brooklyn Historical Society’s Crossing Borders, Bridging Generations project. Jaime-Jin hails from Charlottesville, Virginia, lives in Brooklyn, New York, and loves fermented food.