My Farewell to Unbound

I am the bearer of other people’s stories. I carry them with me like so many bags on my back. And sometimes they carry me. These stories do not belong to me; they have been entrusted to my care.

They are the stories of people navigating uncertain times: an Israeli woman speaking for justice for Palestinians; a Kenyan pastor labeled subversive, beaten, and indefinitely detained while preaching for democracy; a gay Baptist minister arrested for holding a peaceful sit-in after being denied a marriage license in Kentucky; an arts ministry in Sing Sing Prison; a young seminary student struggling beneath the weight of student loans while facing limited opportunities for pastors; and a program officer for the National Park Service who is awakening children and families to the presence of God in a much-forgotten, taken for granted creation.

And within these stories are ideas, released like moths from a canister, each seeking its own version of the light. These ideas have searched for God’s economy in Protestant theology; sought to continue Rev. Dr. King’s Poor People’s Campaign; examined the impact of economic crisis on vulnerable, particularly immigrant, communities; mapped new faith-based strategies for combating HIV/AIDs; and reflected on the threats to effective and ethical functioning of our democracy.

This has been my ministry: helping craft stories that witness to the embodied truths of human experience, justice, and the Gospel. It is by presenting particular and irreducible human beings that Christian editors like me seek to challenge—to dismantle—comfortable totalities and systems that oppress.

Like the sermons we preach, we never know what impact these words are having, whether anyone out there is really listening. But that doesn’t stop us from speaking… or we ourselves listening.

This vocation of listening is the same calling I experienced in prison and hospital chaplaincy and in faith-based community organizing. It is what I am asked to do in prayer and worship. But for a long time, I had no idea that being an online editor could ever fulfill, even deepen, this charge.

In fact, when the notification for this job of Managing Editor of Unbound first came across my inbox two years ago, I deleted it. I found its focus on Christian social justice exciting but I was skeptical of online and social media’s ability to cultivate “deep impact” among users. Besides, I was applying for parish ministry. But as is often the case, God had different plans for me.

Two years later, and online media is what I do. 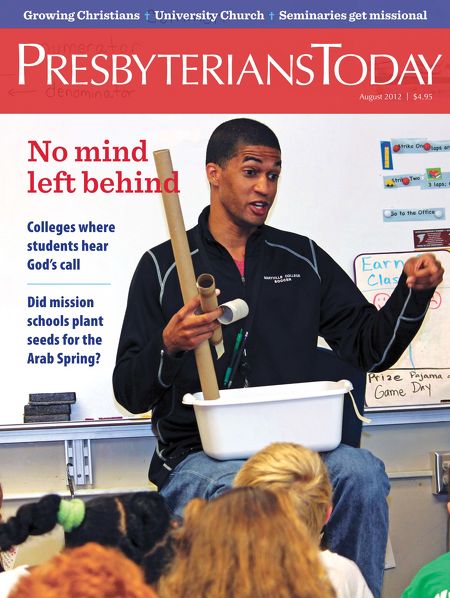 And now I have been called away again. After careful prayer and consideration, I have accepted a call to serve as the Editor of Mission Publications for the Presbyterian Mission Agency of the PC(USA). At the beginning of this ministry, the lion’s share of my work will be to steer Presbyterians Today (PT), our denomination’s flagship publication. My role as editor will be very different than the forms it has taken previously. In striving to maintain the quality of material evidenced by PT over the last many years, I will seek to preserve a legacy of integrity in service to the whole church. But increasingly, we will be engaging new generations by building a credible online presence and applying organizing strategies to broaden our reach and deepen our impact. Our goal will be to exhibit and explore new participatory media models that emphasize interactive conversation, social networking, and user-generated content—and to equip existing and emerging worshiping communities with those same tools. These new directions will grow out of intentional listening to current subscribers, prospective subscribers (particularly young folks), staff, and faith leaders, as we identify what should, and should not, be changed.

It is an exciting opportunity to be part of a new stage for Presbyterian publications, pushed to be innovative not only in their strategies but also in their content: prophetic articles and multimedia that speak, compassionately, with all due complexity, to the issues most pressing and most dear to the hearts of Presbyterians. We will seek to provide content that challenges and elevates our lives, minds, and ministries, inspired, equipped, and connected through Presbyterian Mission.

This was not an easy decision on my part. I love Unbound. I had the privilege of being part of its creation. Unbound has been a space, set along the margins of the church, to speak honest and prophetic words of critique—and to envision a more just, courageous, and ecumenical church. Since its inception in October 2011, Unbound has published 320 articles, action alerts, worship resources, and multimedia posts—including seven journal issues or series. In its first year, Unbound reached over 31,000 individuals. Unbound has, to my knowledge, more young adult readers and contributors than any other PC(USA) publication (the kind of engagement I now hope to draw to our other publications). It has spoken of what others would not, and taken positions when others remained neutral. One of our best moments was when one young person wrote us, saying, “Words cannot express how proud I am of my church. This is why I stick around, even when it’s tough”; or when others have written about revisiting a discarded faith after discovering a social witness they believed forsaken by the church.

I have been privileged to see my editing role transform into a ministry, as I walk alongside contributors as they craft their voices, ideas, and callings. Moreover, Unbound has given me the chance to live into being a Christian editor in these uncertain times when we face any number of ecological, economic, and denominational crises. Like any good sermon on Sunday morning, Unbound has been an interactive pulpit for documenting these uncertainties and confessing our sins, but also for proclaiming a new world in Christ—a creation unbound from all systems that exploit, freed to hear more than the monologues of various powers. Unbound, in this sense, has been a bit utopian in its high hopes, stretching as far as we can with limited resources toward unlimited grace.

But it is time for a change. Unbound is entering a new phase. It will be experimenting with alternative media models. For instance, our next issue will be comprised entirely of short video interviews. And we are planning a special series on the future of Christian social witness, bringing together those who work at the intersection of social ministry and new media, hoping to map new ground in the context of emergent or emerging churches and organizing ventures. The series will assume a dialogical format, each week featuring a guest director and conversation partners around a single theme. This new phase will also be a time to focus our objectives and audience as we seek to equip Christian social justice advocates, particularly young adults, with an online forum for sharing needs, strategies, effective models of action, and stories.

I will stay on as a Contributing Editor and will be assisting with the transition as we look for an Interim Managing Editor. That person will bring new vision to the work of Unbound and will likely transform it in ways I cannot anticipate.

Now for my acknowledgments (please excuse the “Oscar” moment of thanking everyone and my dog too).

I am deeply thankful for the opportunity to work alongside someone as brilliant in mind and in strategy as General Editor Chris Iosso. He has pushed me to buck online trends and offer consistently substantive, thoughtful content. He has given me a great deal of freedom to pursue projects, contributors, and sometimes-controversial themes—and has himself evidenced considerable editorial courage. He has also been a friend and mentor to me in my own first years of ministry. Unbound would not exist if it were not for Chris: it was he and others who, after the disbanding of Church & Society Magazine in 2006, labored to resurrect and transform its witness.

I am grateful to the members of the Advisory Committee on Social Witness Policy and to our Board of Advisors for their vision, counsel, and support throughout the creation and re-strategizing of Unbound. I lift up, in particular, Cynthia Holder-Rich, who has been an ardent supporter and visionary as Unbound rethinks its future. I thank Bryan Volz and Rob Moore who were instrumental in the design of our site. They helped ensure that the aesthetics of our site matched the beauty we have sought in our words.

But most of all, I want to thank you, the reader and contributor to Unbound. You are what makes Unbound a community. You push us continually to consider and embody new and sometimes perilous perspectives. You take the ideas and stories of Unbound out into the world, into pulpits and community actions, onto Facebook and Twitter, into your prayers and thoughts. You are Unbound. Of all the uncertainties faced by a Christian editor, that is one certainty upon which we can rely: there is no Unbound without you and the Spirit that moves through you.

Digging Up Dirt On the Millennial Generation

Thank you, Patrick Heery: A Prophet with Honor in Unbound