Why the PC(USA) 220th General Assembly Voted Against Divestment

The General Assembly has come and gone, and amidst much sound and fury, we now face the task of reflecting on what we have done and who we are now. From my vantage point as a commissioner, it seems as if we walked ever closer to a new vision for who we might be, only to step back at the final moment out of fear of losing who we are. That fear is real, it is faithful, and it is grounded in some hard truths. But it is also paralyzing.

Paralysis was an ever-present theme at the General Assembly, from the opening worship service onward. We were asked to reflect together on Mark 2: 1-12, where a paralytic man, after much difficulty, is brought into contact with Jesus, is forgiven of his sins, and cured of his paralysis. The crowd is amazed and God is glorified.

While there is much to be gleaned from this passage, we seem to have gravitated most to identification with the paralytic before his healing. We feel his paralysis, but not his cure. We want to be cured, but we are not so sure that we are ready to cut a hole in the roof of the building to make it so. On the most controversial issues before this assembly, namely marriage equality and divestment from certain companies doing business in the West Bank, we seemed to be more concerned with the structural integrity of the church than with what was going on inside it.

I sat on Committee 15 for Middle East and Peacemaking Issues, the same committee charged with examining the various overtures relating to divestment from Caterpillar, Hewlett Packard, and Motorola Solutions because of their roles in the continuing occupation of the West Bank. I came to the job conflicted, having listened to faithful voices on both sides of the debate in the months leading up to our work together. I was not alone in my uncertainty, but eventually our committee came to a decision, supported by a decisive majority, to approve the decision to divest. The General Assembly in plenary came to a different conclusion, rejecting divestment by two votes on a procedural motion. Similarly, the committee charged with hearing overtures on marriage equality supported changes that would move our church closer to the acceptance of marriage rights for all of our members, only to see that motion fail, on a close vote, in plenary.

So what happened between the committee votes and the plenary votes? Drawing on my experience in Committee 15, I see two important factors at work. First, the narrative the committee heard about divestment was strikingly different from the narrative on the floor of the Assembly. While we heard compelling testimony from voices on both sides of the debate, the voices that I believe ultimately determined the committee vote were those of young Jewish men and women urging us to divest. They had come to believe that the actions of Israel in regard to the West Bank had violated basic principles of their own faith. To be sure, we heard Jewish voices on the other side of the issue and those voices certainly represent the majority of American Jews. But these young men and women wanted us to know that Jewish opinion is not monolithic. They allowed us to believe that justice for Palestine is not an anti-Semitic position.

These voices, however, were not heard on the floor of the General Assembly. The dominant Jewish voice came from Rabbi Gil Rosenthal of the National Council of Synagogues. In an ecumenical greeting on the day of the divestment vote, Rabbi Rosenthal warned the delegates that divestment would fracture the relationship between the PC(USA) and its Jewish partners in faith. And thus was the ensuing debate framed. Instead of a debate about justice, we had a debate largely centered on how our actions would be perceived. We worried, with justification, about our partners in the American Jewish community, but in so doing we lost sight, to my mind, of the central moral questions at issue.

I should note that, as an Assembly, we did take one step that reflects our responsibility to support justice in the Middle East when we voted to boycott Israeli companies manufacturing products in the occupied territories. This should not be minimized, and it offers real opportunities for organizing and educating in our local communities. I do find it uncomfortable, however, that we were willing to reject the actions of foreign companies that violate our collective conscience as Christians, but we were unwilling to reject actions of American companies in a similarly powerful way.

We can cel­e­brate the real con­tri­bu­tions of Young Adult and Theological Seminary Advi­sory Del­e­gates, but can we be sure they will remain as active mem­bers of a church that seems afraid to hear their voices? If we choose an imag­ined pru­dence over a prophetic stance, we risk los­ing these mem­bers who seem to ache for prophecy in our denomination.
___________________________________________

We then need to examine how much we listen, as commissioners, to the advice we purport to want. Is “advisory delegate” simply a meaningless title? More importantly, if we are truly concerned about the diminishing numbers in our denomination as we go forward, what sort of message are we sending to these, the potential leaders of our future church? We can celebrate the real contributions of Young Adult Advisory Delegates and Theological School Advisory Delegates to the 220th General Assembly, but can we be sure they will remain as active members of a church that seems afraid to hear their voices? If we choose an imagined prudence over a prophetic stance, we risk losing these members who seem to ache for prophecy in our denomination.

In the final analysis, we chose, as a church, to act prudentially rather than prophetically this year, believing that these two directions were finally incompatible. I am not sure, however, that it is prudent to ignore our prophetic calling. We can choose to focus on where we are, worrying about the relationships that we currently have and refusing to risk new directions. Without doubt we will face challenges if we take our prophetic role seriously. We will lose congregations and we will challenge some of our faith partners. We will be a different church. If we live in the fear of loss, we will remain where we are.

If, however, we risk being prophetic, who can say what we might gain? Whom might we reach? Might we offer a new way for people to view the church, people who have given up on faith communities precisely because they seem to be focused inwardly rather than outwardly? Being willing to speak in a new voice opens up opportunities as well as closes them, but we haven’t seriously reflected on this, largely because of our fear of loss. We must remember that we are not ultimately charged with being the largest church we can be, or the wealthiest, or the fastest growing. We are charged to do justice, to love kindness, and to walk humbly with our God. 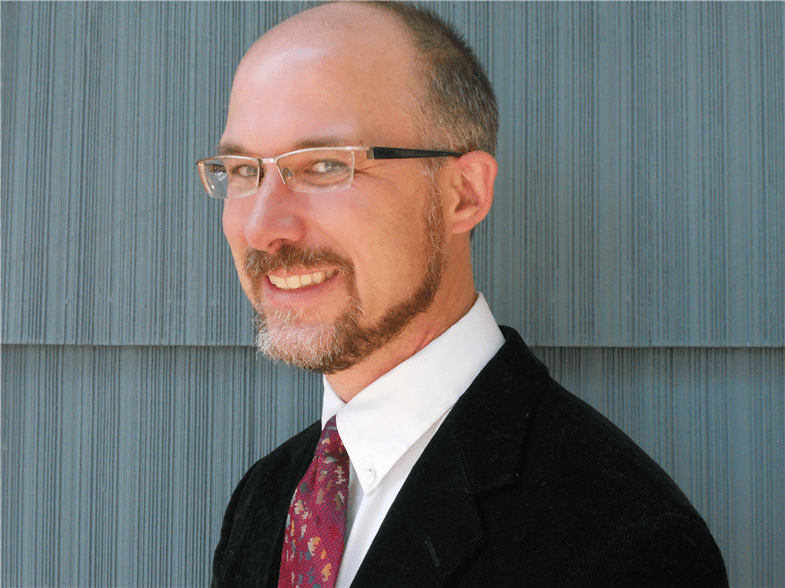 Robert Trawick is an Associate Professor of Philosophy and Religious Studies at St. Thomas Aquinas College in Sparkill, NY. His research interests include Reformation theology and the intersection of theology and labor. He has written most frequently on the Social Gospel movement. He lives with his wife Amanda and son Owen in the lower Hudson Valley, where he is an ordained Presbyterian elder.
Share this
Tags:

Will the Presbyterian Church (U.S.A.) Become a Peace Church?