I’ll admit it. I winced when I read the theme for this week’s posts, “Vulnerable Populations and Christian Responsibility.” Again, I thought, a discussion of women is framed as taking care of the vulnerable. In healthcare settings, not all women are equally vulnerable. I have questions. Where does women’s vulnerability come from? Which Christians get to act out their responsibility – and which ones are acted upon? Do the vulnerable have “Christian responsibility?” What gets in the way?

There is tremendous power and privilege wielded in the politics and practice of health care. Women must navigate contentious conflicts often involving third and fourth parties just to receive basic care. Meanwhile, providers, merchants, and employers create barriers and feel justified sharing their own judgments with the patient as to how she ought to care for her body. Social control is wielded in these one-on-one encounters and also broadly in the public square. Tiny acts of resistance may become symbolic acts. I am reminded of the Syrophoenician woman who challenges Jesus’ initial refusal to heal her daughter (Mark 7:25-30 and Matthew 15:21-28). It takes courage to interrupt the seemingly legion scripts limiting who is possessed of personhood, able to access society’s opportunities, attention, and full resources.

When women are mentioned, a conventional set of images and expression are called up. The broad category “women” is generally represented by the expression of middle-class, white women’s experiences. There’s a completely different set of images summoned if we speak of poor women. Often described by, and essentialized to physical characteristics different from men and reproductive function, women are not allowed full autonomy. Organizations like SisterSong remind us that women of color experience the oppressions of health systems differently – including forced sterilizations in the not-so-distant past. The frame of reproductive justice, wider than that of reproductive health, acknowledges that differing access to care creates inequities and influences disparities. Consent continues to be a critical issue, as women have experienced exploitation and oppressive practices in the name of care. The right of self-determination is not been meted out equally. Poor women, and particularly women of color, are frequently acted upon. In the face of these injustices, Jesus reminds us of the measure of a ministry – not unlike Amos’ plumb line – is how you treat the “least of these” (Matt. 25:40). 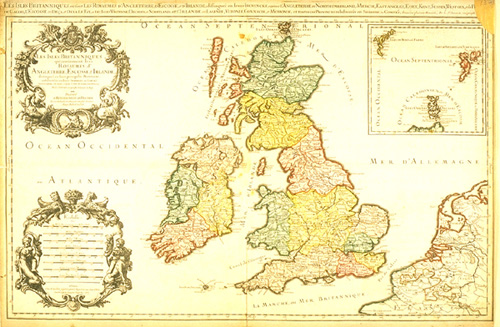 Ship Captains and sailors were commonly warned when they reached the edge of charted territories that beyond “there be dragons.” As women’s bodies continue to be contested both privately and publicly, their decisions and actions have political consequences for individuals, communities and society. What is covered? When they can access care? How must they navigate medical providers to find services?

Legislators and politicians debate whether women’s reproductive health is basic healthcare, often framing it as special care. They openly debate what is good for women – while claiming their own roles as caregivers, they deny access and opportunity. Mike Huckabee’s statements and the public discourse surrounding them in January are but one example. The impulse to care for women, to frame them as vulnerable, needing particularly personal limits to prevent them from acting in socially harmful ways, these measures get intimate when pregnancies, potential, real, or imagined, are involved. Poor women are particularly at the mercy of the political winds. Meanwhile, intercessors claiming to act in women’s best interests end up obstructing access and interrupting capacities to self-determine care options, substituting system for self. What healthcare reform actually enacts and what it intended to do may not match, especially regarding women’s healthcare.

Healthcare reform took aim to rectify massive inequities in how medical care is available to Americans. Those with means have always been able to navigate the confusing and conflicting systems. Those with less means are at the mercy of politicians, corporations, the medical professions, and varying community standards, among others. How much does one pay for medications, doctor’s office visit, and procedures? Where do you access care? It depends – and does so widely! The American ideal of equality – and its more important cousin equity – undergird the arguments for addressing the gaps. Who gets to access care? When? What kinds of care are available? Where does the government enter into the considerations?

Ginna outlines a number of useful ways the church has engaged in the public and private spheres of health care. The 221st General Assembly (2012) was no different in being asked to weigh into the discussion. The framing of the “Just Access” overture attends to who gets to exercise legal rights to healthcare and gave the General Assembly another opportunity to affirm existing church policy regarding reproductive health (most notably the 1992 policy restated in the final action of the assembly on the overture).

Moral agency and physical autonomy are not small things. Free will and wholeness are rooted in them. Often, moral agency comes down to who gets to say “no.” When the system builds in restricted access for whole categories of persons, it diminishes freedom and binds consciences. Inequities based on sex are unjust and exasperated when compounded by race, age, disability, and others.

Contested as it may be, the Affordable Care Act (ACA) has important implications for women. Leveling the premiums for women and men shares the cost of health care equally and removes one of the penalties women previously encountered in accessing insurance. The Kaiser Family Foundation (KFF) has been tracking many pre-and post-expansion factors. A few of its key findings:

It makes sense that women are benefiting from reform efforts, for women have long-reported costs as a major barrier to getting care (see figure below from the KFF, Health Tracking Poll, conducted Sept 12-18, 2013). 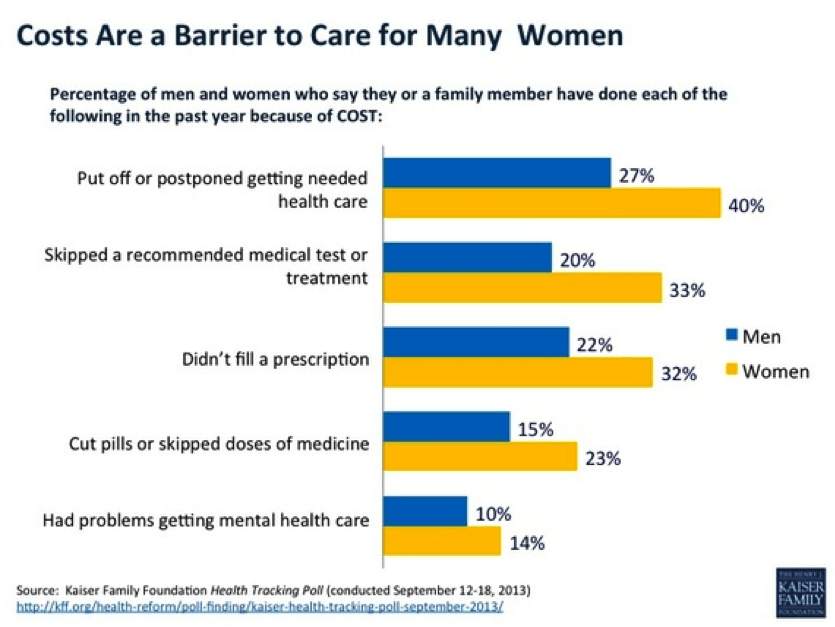 The KFF tracks these gains in a number of press releases, studies, and fact sheets. Earlier elements implemented included extending benefits to young adult children whose parents are covered by insurance until they are 26 years-old. The fact sheet enumerates additional major benefits of the ACA for women. These benefits extend to existing insurance plans as well as those adding new coverage health care exchanges.  Highlights for women include:

This list points toward inequities that have existed and widened in the private insurance markets. Some may consider these radical changes, but in reality, these corrections support wholeness, basic body integrity, and agency for women. Before the ACA changes, it was not unusual for pregnancy to be considered a pre-existing condition which could bar women from being covered by private insurance. Pregnancy is not a disease! Regardless of whether a woman of any age had ever been pregnant, premiums were much higher to insure her.

Proven prevention services were not available to all patients. Contraceptives (particularly hormonal methods also used for purposes other than preventing pregnancy) were exempted from most prescription coverage, often making them out of reach. Meanwhile male-specific treatments like Viagra, prescribed for erectile dysfunction, were more frequently covered. Prescription equity continues to be debated. Preventing full access to contraceptives has led to more unwanted pregnancies and abortions as well significant federal and state expenditures. The ACA is already showing affects on contraceptive access. Additionally, some insurers required women to first go to a primary care physician for a referral to an OG/GYN for an annual exam – necessitating visits to two doctors and requiring two co-pays for insured women. These extra barriers have been reduced by the reforms enacted, while others are still being contested in the courts and legislatures.

Western culture has long characterized women as earthly, bodied, contingent, and weaker; the implications have echoes that continue to inform practices today. States serve patriarchal interests when they regulate how, when, and even if, women can determine what they do with their bodies. Women are devalued in debates over when life begins and whose rights the state is burdened to protect when there is a pregnancy. The recent case in Texas of the state mandating life support for a woman determined to be brain-dead woman when the fetus she was carrying was 14-weeks has received much publicity and illustrates state laws that void women’s medical directives if they are pregnant – even if the fetus is not yet viable. Viability, even broadly considered, does not begin before the 21st week and common consensus marks it after 24 weeks gestation.

The Munoz case is not an isolated one, and it raises multiple issues of responsibility. As the family grieves, the question now turns to who pays when the state voids a woman’s advanced directive and orders extreme measures contrary to her family’s wishes? The debates and consequences rage on. In life, when women’s choices are contested, considered dangerous, or when drug use is involved (sometimes even the admission of past use), women have been detained to “protect” the fetus. Even employed, insured women are subject to these interventions.

The playing fields remain uneven. Women with means (including a majority of Presbyterians) have always had resources (and connections) to navigate the healthcare obstacle course finding services and remedies for their families and themselves. Most women and their families have fewer resources, opportunities, and options. If our concern was only for ourselves, perhaps we may be tempted to leave the discussion here. However, adhering to Jesus’ “least of these” indicator for what we as believers are to do urges us to continue engaging systems, addressing inequities, and working so that all persons, regardless of their varying vulnerabilities, have access to healthcare.

The Brief Statement of Faith reminds us:

In a broken and fearful world
the Spirit gives us courage
to pray without ceasing,
to witness among all peoples to Christ as Lord and Savior,
to unmask idolatries in Church and culture,
to hear the voices of peoples long silenced,
and to work with others for justice, freedom, and peace.

The struggles for justice and equity rage on, and so the church’s work continues.

AUTHOR BIO: Molly Casteel has served as Coordinator for Representation, Inclusiveness, and Ruling Elder Training in the Office of the General Assembly and its Mid Council Ministries of the Presbyterian Church (U.S.A.) since July 2009. In this capacity, she advocates on behalf of the General Assembly of the Presbyterian Church (U.S.A.) on matters related to full representation, participation, diversity, and ruling elder support. She previously served as Associate for Women’s Advocacy in the Presbyterian Mission Agency and, before seminary; Molly worked in public health, advocacy and education in Tulsa, OK.  Molly holds a Master of Divinity, from Princeton Theological Seminary and a Bachelor of Arts, from the University of Tulsa. She is an ordained teaching elder in the PC(USA) and worships with the saints of Crescent Hill Presbyterian Church in Louisville.

Check out the rest of this week’s articles here.

Reproductive Freedom and Faith in 2020

Caring for Older Adults Through Advocacy

Seeking Justice Through the Power of Relationship: HIV/AIDS and Healthcare

Reproductive Freedom and Faith in 2020

Here we are. We’ve almost made it. The final days