A Response to the Foothills Presbytery Overtures

I try to avoid getting bogged down in the details of church polity.

Generally, this is because I think it leads us to spend too much time looking inward and debating minutia when that time and effort would be better spent looking outward, addressing our world’s grievous injustices.

That said, when I read the set of GA reform overtures submitted by Foothills Presbytery, I felt compelled to delve into the complexities of Presbyterian polity to express exactly why I feel these measures would do lasting harm to our church. The proposed overtures are non-biblical, antithetical to Presbyterian tradition, and would strip the General Assembly (GA) of its ability to respond to God’s call.

While I encourage Presbyterians to read the overtures themselves, I will summarize here the proposed changes I find most egregious.

First, they would immensely complicate the procedure for proposal and ratification of constitutional amendments. As it stands now, when the GA convenes it considers all properly-submitted proposed constitutional amendments. If the Assembly votes to approve a change to the constitution (as it did last year when it changed language describing marriage from “a man and a woman” to “two people, traditionally a man and a woman”), that proposed amendment must then be approved by a majority of the presbyteries.

Under the system envisioned by the Foothills overtures, constitutional amendments would only be considered once every six years. If approved by the Assembly, a proposed amendment would then need approval from a two-thirds majority of presbyteries. Two-thirds majorities are currently required only to add Confessions to the Book of Confessions. 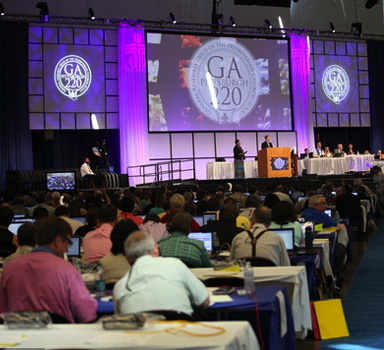 This change, shrouded in the banality of polity-speak, would be a stumbling block, inhibiting our ability to live into our identity as a church that is reformed and always being reformed according to the Word of God. The change to consider constitutional amendments every third GA injects a needless delay in the proceedings of our polity. Moreover, the change from “a majority of presbyteries” to a “two-thirds majority” grants disproportionate power to those seeking to block a proposed change. Is the vote of a person who is against an amendment twice as important as the vote of someone who is in favor? That is what this proposed change seems to imply.

To justify this proposed change, the overture suggests a Constitution “should not be easily amended without thoughtful consideration,” and I agree with that statement. However, I am baffled that anyone could look at the current system and say, “You know what? It’s just too darn easy to enact a constitutional change right now!”

I love the PC(USA), but we are not a swift-moving people. I do not often hear complaints about the quickness and whimsy with which our denominational bodies act. To be honest, it’s one of the things I love about our church—the careful consideration we give to all decisions, large and small. Sure, at times I am frustrated by our organizational lethargy, but our collective care and caution is part of what makes me proud to be Presbyterian. The proposed changes threaten to upset this delicate balance, to transform our denomination from one that acts slowly and deliberately to one that does not act at all.

Indeed, if you look at the overtures’ second major proposed change it seems freezing our national church in place is precisely the aim of this document. Overture 2 makes clear this desire, declaring, “The PC(USA) shall cease taking divisive, up-or-down, yes-or-no positions on partisan issues of social justice, economics, and politics at the national level.”

I won’t go into the exact means by which the overtures seek to ensure this end because the very idea itself should give every Presbyterian significant pause. While it may sound innocuous, this sentence would radically alter who we are and have always been as a church. It would virtually ensure that the GA is unable to act on any matter of cultural importance.

It’s worth noting at the outset that the language of this proposed change is nebulous and vague, words ready to be exploited by any group that objects to the GA considering a given issue. How does one define a “partisan issue of social justice, economics, or politics”? If by “partisan”, this means any issue over which there is substantial disagreement between any two people, then this would functionally block GA from taking action on any social justice, economic, or political issue.

I don’t like to speak in absolutes, but I feel pretty confident that there are no social justice, economic, or political issues on which all people universally agree. I can understand this overture’s concern “not to give disproportionate attention” to matters of social witness, as it is “only one of the six great ends of the church,” but the solution cannot be to reject social witness as one of the church’s ends entirely.

To defend this radical stance, the overture brings up a tried and true objection to any proposed church action (one which those familiar with the debate over marriage know all too well): “Taking yes or no positions on partisan issues has caused and continues to cause division within the denomination and loss of members.”

There is no debating the truth of this statement, but that doesn’t mean we shouldn’t, as a denomination, act anyway. In the Foundations of Presbyterian Polity, discussing the Calling of the Church as the Body of Christ, the Book of Order makes clear that, first and foremost, “The Church is to be a community of faith, entrusting itself to God alone, even at the risk of losing its life.” (F-1.0301)

I absolutely love this passage. Back in seminary, it was in these words that I heard God speak, telling me I had indeed found the Church that God was calling me to serve. Our PC(USA) Constitution makes it clear that it is always time to follow God’s call, even if our churches decline in membership, even if the church as we know it ceases to exist.

As it turns out, self-preservation and membership gain are not among the great ends of the church. If we accept the justification of the Foothills overtures, however, it may as well read “The Church is to entrust itself to God, as long as what God calls for isn’t unpopular or potentially divisive.”

This kind of thinking also pretends that divisions are only created by the Church’s action and never by the Church’s inaction. This is simply not true. Sure, bold action by the denomination may result in more high-profile divisions within the church. But what of the multitudes who do not attend church because they have witnessed a Church that chooses not to act in the face of society injustices, those who have come to view the Church as increasingly irrelevant to the Kingdom of God?

Staying True to Our Heritage

An aversion to social discord is not in line with the life of Jesus or the history of the Church.

One thing that is abundantly clear in looking at the life of Jesus is that God’s action in this world is often divisive. God’s actions ultimately lead toward unity, but oftentimes the unified destination is reached by roads of discord. Jesus’ words and actions were not met with universal praise, yet he did not cease to speak and act for fear of the potential fallout. If I am not mistaken, he even claimed to bring a ‘sword’, rather than the so-called ‘peace’ of conflict-avoidance.

Likewise, if the history of Protestant Christianity shows us anything, it’s that seeking to follow God’s call regardless of social circumstance is not a unifying endeavor. Churches split, divide, disband, and rejoin. It’s messy, it’s painful, and at times it breaks my heart—but it’s who we are. We are people committed to communally discerning God’s call on our lives, and then living out that call as best we’re able. The Foothills proposed overtures might be able to slow our rate of division or even to circumvent some pain and heartache altogether. The cost, however, is far too great.

The Book of Order reminds us that the role of the GA has always been to “lead and guide the witness of the whole church” (G-3.0501). These changes, simply put, would strip GA of its ability to lead and guide. In the name of defending our Church from what the authors clearly feel is too-rapid change, this document would fundamentally change the structure of our polity and the responsibility of General Assembly in ways far more radical than any marginal change to which the authors respond.

On matters of social importance, the national church would become voiceless; yet we are approaching times in which the Church will need to speak with a strong and prophetic voice. The exploitation of our natural environment, our idolatry of money, systemic racism in our nation’s institutions, the continued oppression of marginalized communities like undocumented immigrants and those without housing—these are issues in whose face the Church cannot be silent.

God certainly has a Word to speak on these matters, and so many more. It is our responsibility and joy to discern where God is leading, then speak that Word and follow in whatever unity we can muster. We cannot abdicate this responsibility out of fear of the division that might ensue.

I wonder how—or if—the proponents of the Foothills overtures have encouraged social progress in their area? Do they have a track record of social reform and courageous witness unafraid of “afflicting the comfortable”, even a little bit?

As I read them, the Foothills overtures amount to nothing short of an abdication of our responsibility to follow God even in the face of pain and hardship. Please, read them yourselves and speak out to your minister and/or presbytery, that we might maintain the PC(USA)’s ability to respond to God’s call.

Read more articles in this issue “A Year for Confessions: Issues of Social Justice Before the 222nd General Assembly.”

The 'Mr. Rogers Initiative' and Other Mission Visions