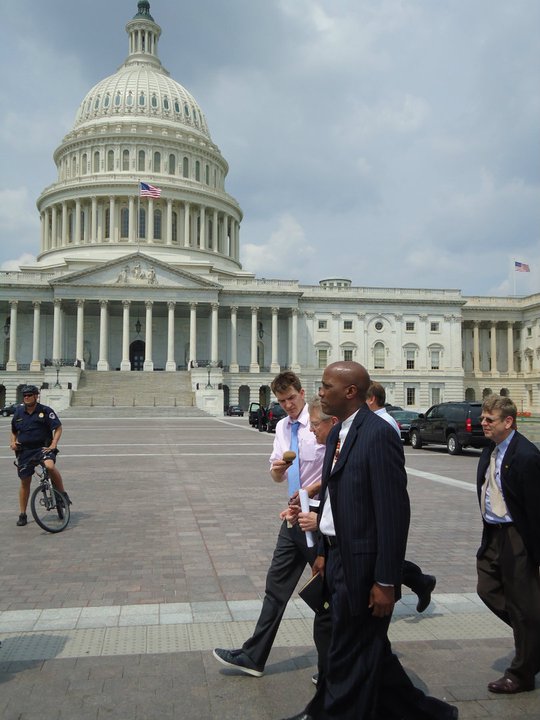 In molding a model for public witness ministry that serves the whole of the Presbyterian Church (U.S.A.), I have been confronted with two significant challenges: first, how to show that this ministry does, indeed, serve the whole church, not just a self-selected, affinity group; and second, how to balance the richness of our past with the promise of our future. It is clear to me that outreach to, and service with, young adults is essential to meeting both challenges.

Using Community Organizing as a Political Advocacy Model
I assumed the position of Director of the PC(USA) Office of Public Witness (OPW) in Washington, DC, on May 3, 2010.[i] Prior to my arrival, the “Washington Office,” as it was formerly known, underwent a two-year vacancy in leadership.[ii] During this two-year period, a denominational survey regarding the OPW produced two significant findings. First, many PC(USA) members were not aware that an OPW existed. Second, even fewer PC(USA) members had had any interaction with the Office.

My interview process for the position of Director required me to offer a plan for transforming the historical model utilized during the Office’s sixty-four year history. Drawing on my twenty-five years of pastoral ministry, I presented a plan that outlined a community-organizing model. The plan focused on activism, alliance building, and community development. During my first pastoral call in Greensboro, North Carolina, I used a community-organizing model in collaboration with an African American clergy group called the Pulpit Forum. We advocated for indigent healthcare, tenants’ rights, worker justice, education, and a host of other justice issues impacting the poor. We organized and educated persons living in poverty so that they could serve as agents of their own liberation. Our model followed the basic community-organizing principle “don’t do anything for an individual that he/she can do for him/herself.”[iii] We believed that people of all religious faiths, ethnic backgrounds, sexual orientation, and socio-economic status had a responsibility to contribute to what Dr. Martin Luther King Jr., referred to as the “beloved community.”

We recognized that persons living in poverty are often excluded from decision-making processes that determine the framing of their own communities.[iv] Our aim was to press for the voices of “persons long silenced” to be heard, by imparting the skills necessary (namely, speaking for themselves) to participate as full partners in their communities and the nation.[v] We grounded our training in the biblical ethic that love must be at the center of advocacy by, and with, poor people. We believed that the movement of the Holy Spirit would provide an outcome inspired by such a love, which would enable transformation into the beloved community. Liberation could only occur if both the poor and the privileged saw themselves anew. Speaking Truth in Love to Power became emblematic both of our ethos and our efforts to confront the barriers that stood in the way of creating the beloved community.

The theme of Speaking Truth in Love to Power was a continual theme in our efforts—my wife’s and mine—when we organized, chartered and founded, with God’s help, Liberation Community PC(USA) Church in Memphis, Tennessee.[vi] We organized a ministry that evangelized the poor into membership in the Christian church through the PC(USA). Our ministry at Liberation Community was designed to address the root causes of poverty while sharing the gospel and love of Jesus Christ with persons who were unchurched and living in poverty. Our work required that we learn about the contextual needs of people in poverty—and that our organizing model be flexible enough to meet the particular needs of a particular community.

Reframing Our Focus for a New Era of Justice Advocates
But the Advocate, the Holy Spirit, whom the Father will send in my name, will teach you everything, and remind you of all that I have said to you. (John 14:26)

In John 14:26, the New Revised Standard Version (NRSV) of the Bible uses the word “advocate” to describe the Holy Spirit.[vii] The Oxford English Dictionary (OED) indicates that the word “advocate” comes from two Latin words ad and vocare meaning “called or summoned to another.” More specifically, the OED continues, “advocate” means, “called or summoned to plead another’s cause in court.” In this text, Jesus reminds us that God sent us an Advocate, One called to plead our case in the court of judgment. The Spirit is an Advocate. Therefore, we, who are filled with the Spirit, are called to a similar task as we work for the coming Kingdom of God. In our discipleship, we stand between humanity’s brokenness and the need for redemption through the lives we lead for Jesus Christ in the world. It must be noted that we do not serve as redemptive voices because of our righteousness. Instead, we serve by God’s grace.

The writer of I John writes “my little children, I am writing these things to you so that you may not sin. But if anyone does sin, we have an advocate with the Father, Jesus Christ the righteous” (I John 2:1b). The word advocate in this passage comes from the Greek word  ?????????? (parakl?t?s – par-ak-lay-tos) meaning an intercessor or consoler. The writer reminds us of Jesus’ atoning sacrifice, which relieves us of our sin, in order to assist us in living in the light. He reminds us of the importance of earnestly confessing our sins, which causes God’s justice to prevail (I John 1:9).

As we develop another generation of social justice advocates in the OPW, it is imperative that we be creative and faith-focused in our approach. Creativity requires recognizing that this is a new generation of young people. Young adults encounter and are shaped by different issues, emerging crises, and human polarities. Their politics are often contextual. As the world changes, so do the priorities and views of young people regarding faith perspectives in relationship to justice. Consequently, the markers of church involvement and societal engagement must be different.

One example of this shift is the end of the civil rights movement of the 1960s. The civil rights movement is over, and so the strategies for action and vocabulary for discussing problems must change. Our new challenge is shifting from African American and European American relations to a multiracial global expansion of race issues. Today, we are engaged in a plethora of race issues that go beyond past discussions on race. We have moved beyond equal accommodation to the global impact of a multiracial world, in which old categories of race are too limited. This muddying of historic racial categorization in our society skews racial labels, even while global demands for redistributing power continue.

Women’s issues represent another shift. While women break domestic and professional boundaries worldwide, questions arise around standards of societal and family life. Dress, ritual, and power, both economic and financial, are ongoing discussions and challenges as we move toward gender justice. Although issues of women’s liberation were battle lines in the womanist and feminist movements in the United States, new questions are being raised about their significance in many countries around the world, including the U.S. The melting pot that we claimed the United States to be in the 1960s is rather becoming a bouquet of flowers in which various groups try to express their culture without assimilating into dominant, western cultural models of living.

Other issues are also changing the face of global movements and human interactions.  Confronting climate change and other environmental issues is critical to our sustainability as a people across the globe, but fifty years ago, we were not facing a widely acknowledged international, ecological crisis. In addition, human sexuality, including same-sex marriage, is now at the forefront of our nation’s struggle toward full inclusion in both church and society. These changes in political dialogue demand that we reframe advocacy in our nation, the world, and in all of the public witness ministries in Washington, D.C.

Reflecting with Scripture on Community Organizing

Pulpit as a Forum for the Restoration of Government

In dialogue with Rev. Dr. Njoya, Unbound has transcribed, edited, and restructured

Ecovillages: A Labor Not in Vain

Help Build Eco-Villages in Haiti… Not for, but with By Ruth Farrell,

Presbyterian Ministry at the United Nations By the Rev. W. Mark Koenig

To a God Unknown

The Public Square as Sacred Space