In the brief statement that follows, a congregation first lifts up key values—not policies or positions—and then calls out divisive rhetoric. They go to scriptural themes and the Book of Confessions. We would note the very good 1983 report by the Church on Reformed Faith and Politics, which was accompanied by a book of essays by Presbyterian ethicists and historians, and the more recent social witness policy Lift Every Voice: Democracy, Voting Rights, and Electoral Reform, which provides guidance and a Reformed understanding of the political process. The 2016 Assembly further updated our position in light of recent Supreme Court rulings on voting rights and financial contributions to campaigns (A study guide for congregations on these issues can be found here). 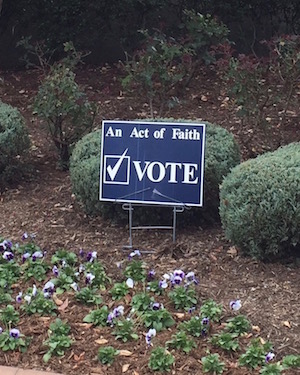 During this election season, the Session of the Nauraushaun Presbyterian Church has been called by the Spirit to speak publicly of its faith in the midst of politics. In these days, we think all who seek to lead the state need to hear more from the church.

We cite with enthusiastic conviction these lines from “A Brief Statement of Faith”:

“In a broken and fearful world, the Spirit gives us courage to pray without ceasing, to witness among all peoples to Christ as Lord and Savior, to unmask idolatries in Church and culture, to hear the voices of peoples long silenced, and to work with others for justice, freedom, and peace.”

This is how we intend to live, pray, and vote.

The Persistence of Trauma and the Power of Belief

Today is the day. It is Election Day. Anxiety is

I woke up this morning with little to no sleep,