To begin, let us introduce ourselves. We are a newly wed 29-going-on-30, couple; my wife is a final-year seminary student preparing for ordination, and I am a Bachelor of Arts working at a job that strikes a balance between a living wage, quality of life, and benefits. If you were a healthcare provider or insurer, you might note the following about us: we’re white non-smokers with little-to-no family or personal history of serious medical problems. Our BMI – based on a simple height-to-weight ratio – categorizes us as “obese,” but if we were allowed to plead our case on that count, we would argue that we are both very conscientious about healthy eating and regular exercise. Rachel has done a sprint triathlon, James is training for a 10k, and we recently ran a 5k together. (We’re not saying we couldn’t eat less or eat out less often, but that’s another article for another issue.) All in all, the sum total of what you might be able to discern from our medical history and questionnaire answers would indicate that we are prime candidates for the health insurance marketplace: we’re young, have a steady income, are in good health, and need to buy our own health insurance.

We’d like to give you a bit of our story before we dive into such a far-ranging and important topic. I, James, recently left a lower-paying job with health insurance for a job with higher pay and fewer benefits. I, Rachel, have moved often and held several different jobs before returning to school almost 3 years ago; accordingly, I bought minimal-coverage, high-deductible insurance. Whenever possible, we visit Christian counselors who are able to guarantee an affordable price, but if we had access to an affordable clinic, we would likely seek other medical help more often. As it stands, seeing a doctor for any reason seems alternately more expensive than hoped or less expensive than expected with no apparent means to tell which will be which.

We both entered the job market during the Great Recession and the Jobless Recovery and subsequently entered our responsible-adult, married life in the era of the Affordable Care Act/‘Obamacare’ rollout. As we’ve approached this question of how to best provide for our healthcare as a couple, we’ve found ourselves in a bit of a dilemma. We’re facing fast-approaching deadlines if we don’t want to be penalized, but we’re finding that these systems are difficult for the uninitiated to make sense of and don’t always seem to work as they should. Furthermore, the majority of this seems to be far beyond our control.

Where does that leave us? Nowhere, really; certainly we’re weighing our options and deciding our personal course, as must we all. But more broadly, we find ourselves asking how we ought to be framing this discussion as Christians and as Presbyterians. What does our faith tradition have to offer to this discussion in this time and place? Where and how can we discern God’s purpose in our midst?

As I, James, reflect on these questions of healthcare and health insurance from a biblical perspective, two passages in particular come to mind. The first one, from Luke 10, is a well-worn story from Jesus’ teaching. A young man approaches the Lord, and “wanting to justify himself,” asks, “Who is my neighbor?” Jesus responds with the familiar parable of the Good Samaritan, concluding with his own question: “Which of these three [travelers] was a neighbor?” The young man, like us as readers, is forced to conclude, “the one who showed him mercy.” Jesus seems to agree, instructing us to “go and do likewise.”

Second, I remember Jesus’ teaching from the end of Matthew 25. This is a more difficult passage – and one I feel under-qualified to interpret definitively, as it deals with the ever-mysterious ‘end times.’ The thrust of the passage, as many of you know, is the Son of Man coming in glory to judge the nations, separating the sheep from the goats. At various times in my life, this ‘Day of Judgment’ has been a terrifying prospect to me, especially as I hear those who stand condemned ask in bewilderment, “Lord, when was it that we saw you hungry or thirsty or a stranger or naked or sick or in prison, and did not take care of you?” Jesus’ response is arresting, to say the least: “Truly I tell you, just as you did not do it to one of the least of these, you did not do it to me.” The chapter concludes with “them going “away into eternal punishment, but the righteous into eternal life”: A weighty sentence for both groups! My spirit is lifted a bit by backtracking to verse 34 and following. Isn’t it interesting that the righteous are just as bewildered as the “accursed?” They are surprised at Jesus’ praise and approval; I can almost hear them asking, “You mean, when we helped that guy, what’s-his-name…we were doing it to you?”

These two passages, then, help me to understand what God might want me to do – what God might want us, the Church, the nation, the world to do – when it comes to the subject of healthcare. Try as many among us might like, we will find no crystal-clear scriptural basis for the arguments we construct, that “HMOs are a sin against God” or “Jesus would decry Obamacare if he were here with us today.” But in light of Scriptural passages like these – and through the guidance of tradition and openness to God’s spirit, I firmly believe that it is possible for us to consider healthcare in a way that is coherent, sound, and glorifying to God. I won’t presume to instruct others as to how to discern the movement of God’s Spirit, but I will say that I believe the same Spirit breathes through passages such as this one from my namesake James – “Religion that is pure and undefiled before God, the Father, is this: to care for orphans and widows in their distress, and to keep oneself unstained by the world.” (James 1:27, NRSV)

For me, all this has led to a simple conclusion: when we discuss healthcare, whether we do so as people or as Christians or as Presbyterians or in any other conceivable manner, we must do so starting from a perspective which springs from God’s will. We must form and enact our healthcare policies in systems in a way that is coherent with God’s Kingdom ‘coming on earth as it is in heaven,’ and with our trust that God will usher in a ‘new heaven and a new earth.’ Even in something as simple as a visit to the doctor’s office, we can still live into our call to live lives so astonishingly characterized by this Kingdom that we might dare to be called ‘God’s righteousness.’ (See II Corinthians 5:21)

As Christians, wouldn’t this be a wiser, more reasonable, and overall superior basis for our discussions? Shouldn’t God’s Kingdom be our primary focus, even as we are unconsciously shaping our mental framework, participating in our public discourse, making our snap judgments, and spending our limited time, talents and money? This is not to advocate removing ourselves from this world – we are called to be its very ‘salt and light’ – but we are deceiving ourselves if we think it would be better to let cable news, political pundits, think-tanks, talking heads, mass- and social-media, or any other force but Almighty God frame this debate of international scope and such critical importance. Should we not follow God in how we live our lives and treat others rather than the rhetoric of our social class, our political beliefs, or even perhaps our local churches? I don’t mean to denigrate any of these institutions but rather to ask that we be mindful of which is the cart and which is the horse.

Let me illustrate my point one more way. My home of Richmond, VA, recently got a fair bit of snow (which for us apparently means almost any). As my wife and I pulled in to our apartment parking lot one night, I noticed that most of our neighbors at the seminary had not thought to lift their windshield wipers, keeping the blades from freezing to the glass. That’s understandable; if I hadn’t seen one car whose owner had done so, I might not have thought to do so myself. There are many reasons why my neighbors might not have taken this simple precaution – they might have forgotten, they might have known they wouldn’t need their cars the next morning, they may have been warm and cozy inside and not wanted to come out. 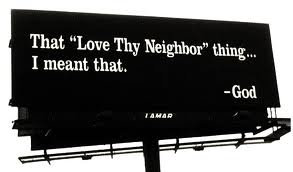 However, that’s beside the point. My point is that I thought “I should do that for our cars, and perhaps I could do that for our friend’s car as a nice gesture.” Then the thought hit me: “If I’m going to do it for those people, what’s stopping me from doing so for every other car?” Plenty of reasons sprung to mind, of course. For one, I’m no mechanic; I don’t know that it’s unequivocally better to lift the wiper blades in the snow rather than to leave them down. I don’t know which cars belong to whom or who might or might not need their car tomorrow before the weather gets warm enough to melt the ice. “Besides,” said my internal monologue, “it’s really cold out here, and I don’t have my gloves! And ultimately, I’m not responsible for them!” And yet, another voice countered, “I may not claim to know God’s truth as to ‘who is my neighbor,’ but I’m reasonably sure it includes the literal ones.”

So as we live our daily lives and particularly as we face this present issue of healthcare and potential reform, let us resolve to act according to God’s Spirit – loving our neighbors as ourselves, and loving the Lord our God with all our heart, soul, mind, and strength.

AUTHOR BIOS: James Shepherd is a Richmond native and 2007 graduate of Grove City College. Rachel Shepherd is from Henderson, NC, a graduate of Davidson College and the University of North Carolina Wilmington, and a final-year student at Union Presbyterian Seminary.

Click here to read more articles in this series.

The Backstory: Healthcare, Christianity, and the Presbyterian Church (U.S.A.)