In this issue, For the Healing of the Nation, Unbound seeks to engage the national healthcare debate from a Reformed Christian perspective and to lift up the stories – the testimonies, if you will – of those who know from firsthand experience the way our current systems of healthcare and health insurance live into God’s vision of shalom – and the ways they fall woefully short.

But before we get too far into this project that Rachel and James began for us, we need to be clear about a basic aspect of Reformed Christian ethics – the backdrop to this issue’s proclamation and witness. And that is this: It is contrary to the Reformed tradition to deny care to someone in need.

Some may call this too bold a statement. But in fact, the Christian tradition of care and healing for those afflicted in body, mind, or spirit is pervasive throughout and fundamental to Christianity itself. Some may argue that it predates Christianity itself, perhaps pointing to the healing miracles of the Prophet Elijah, or the Torah command to open one’s hand to a person in need, whatever that need may be.

This tradition is certainly evident in the healing ministry of Jesus in the Gospels. Our Lord and Savior brought healing and wholeness without regard to the “worthiness” or “social value” of those he healed or what this ministry would cost him. Indeed, in John’s Gospel, it is after Jesus raises Lazarus from the dead that the authorities begin conspiring to kill him, for they see his radical signs and indiscriminate healings as a threat to national order.

During his lifetime and after his death and resurrection, Jesus’ disciples are called to join in his ministry of healing and wholeness. The early church as depicted in Scripture organized itself in such a way as to meet the needs and share the costs of the entire community in a way that would raise more than a few eyebrows in the modern insurance industry. The practices of prayer for the sick and healing were a regular part of Christian life and a means through which our ancestors in the faith experienced the presence of the Holy Spirit.

What began in the early church has transformed into a tradition of valuing health professions and ministries throughout Christian history. In the Middle Ages, Roman Catholic orders of monks and nuns established institutions to care for the poor, the sick, widows, orphans, and travelers. In Reformation-era Geneva, Presbyterian forefather John Calvin lauded the role of the civil government that – among other things – ran the medical hospital in Geneva as an instrument to be used by God. As churches like the Presbyterian Church (U.S.A) turned their sights to international missions in the nineteenth and twentieth centuries, medical missions became an essential part of the Protestant mission movement. Today, many churches in the Global South founded by these missionaries continue to conduct healing services. While the supernatural focus of some of these ministries may discomfort our Western sensibilities, they nonetheless point to the continuing tradition of connection between Christian faith and healing.

The Presbyterian Church (U.S.A.) and its predecessors have put the impetus behind this history of health-related missions and ministries into the concrete terms of social witness policy. The Church has adopted policies and implemented programs concerning a variety of health-related issues, from drug and alcohol abuse to reproductive health to the type of health insurance plans the PC(USA) Board of Pensions makes available to church employees to health concerns facing particular groups of people (children, the elderly, people living with HIV/AIDS, mental illness, or disabilities).

As the foundation to these more particular policies, the PC(USA) has for the last 60+ years called for reform of the U.S. health system so as to assure universal access to healthcare for all people living in our nation. Three policy statements in particular are of note. 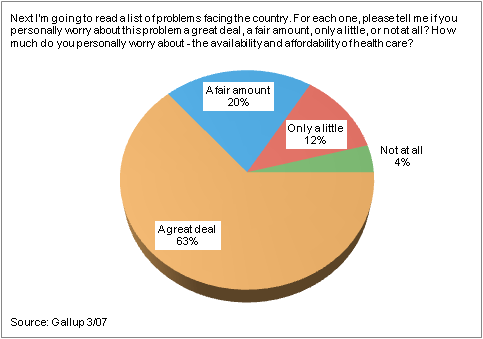 In 1988, the 200th General Assembly adopted the policy statement Life Abundant: Values, Choices, and Health Care, a comprehensive resolution on the responsibility and role of the PC(USA) in the public healthcare debates. This statement names a crisis of access to and adequacy of healthcare in the U.S. – a crisis that remained virtually unchanged until the signing of the Affordable Care Act (ACA) in 2010. It goes on to juxtapose this crisis with the legacy of health and healing ministries in the Christian tradition that I’ve outlined above, from the Old Testament through the present day. In fact, it points out, the Greek word sodzo, often translated “to save” in the New Testament, can also be translated “to heal,” or “to make whole.” Linguistically, we cannot confess Jesus Christ as Lord and Savior without pointing to the importance of healing in Christian ministry – and as such, to our call as disciples to be agents of healing and wholeness.

Laying the framework for future PC(USA) policy on healthcare and health reform, Life Abundant points to the need both for personal responsibility, preventative care, and prudent use of individual health resources and for a communal understanding of health where, in the name of love of neighbor, those with more share their resources with those who cannot afford healthcare.

In 1991, the 203rd General Assembly expanded upon this vision in its Resolution On Christian Responsibility and a National Medical Plan, which calls for the U.S. government to develop a national health plan that is “equitable, efficient, and universally accessible.” In the meantime, it calls for expansion of Medicare and Medicaid to protect the uninsured. 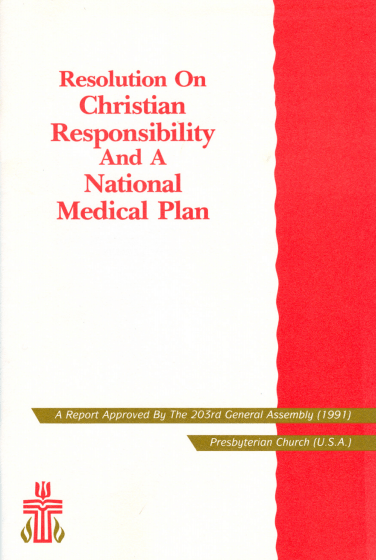 It’s important to note that this policy statement was not simply some pie-in-the-sky ideal toward which the church was pointing the was pointing the government; this policy was written, adopted, and implemented as Bill Clinton campaigned for and assumed the presidency on a platform of a national health reform. In the face of the national healthcare debate, the Church publicly proclaimed the Biblical and theological foundations that our faith says must inform any healthcare policy.

Although a national medical plan was not achieved during Clinton’s presidency, the PC(USA) did not stop speaking out on healthcare concerns. On the contrary, the Church adopted several policy statements reaffirming the foundations of the 1988 and 1991 resolutions and expanding upon them as new issues arose. It was between the adoption of the Resolution On Christian Responsibility and a National Medical Plan in 1991 and the signing of The Affordable Care Act in 2010 that the church adopted many of the above-mentioned policy statements regarding particular health concerns.

In 2008, the 218th General Assembly took a step further and endorsed the principle of a single-payer system that, like Medicare, would be privately provided and publicly financed. In a move that was at the same time ground-breaking and entirely consistent with this long tradition of advocacy for healthcare reform, the Assembly declared, “single-payer, universal national health insurance [is] the program that best responds to the moral imperative of the gospel” (Minutes, 2008, 1133).

As the many Americans who watched the healthcare debates of 2009 with bated breath know, the single-payer option endorsed by the Church was not a front-runner in the healthcare debate. Seeking to advocate effectively in the debates with the absence of a viable single-payer option on the table, the Church distilled from its wealth of healthcare policy 3 guiding values that it deemed essential to a healthcare system that is truly just. In the words of the Office of Public Witness, these are:

So where does that leave us today? It’s February of 2014, and our nation continues to wrestle and debate these matters even as healthcare.gov is rolled out. As some of the stories in this issue demonstrate, in many ways, the ACA has been a game-changer. As other stories tell, there are many among us who still lack adequate healthcare. As Christians who are called to love our neighbors, as disciples who have been commissioned to participate in Christ’s ministry of healing and wholeness, and as the Presbyterian Church whose call includes “participating in God’s mission to care for the needs of the sick, poor, and lonely; to free people from sin, suffering, and oppression; and to establish Christ’s just, loving, and peaceable rule in the world,”[1] the answer should be abundantly clear. We have a history and a heritage to be proud of, no doubt. But we have a lot of work left to do.

Is There No Balm in Rural America?

And Who Is My Neighbor?

And the Word became flesh and lived among us, and