While most of the recent coverage of the Affordable Care Act (ACA), more commonly referred to as “Obamacare,” has been negative, these news stories fail to tell a complete story. There is no doubt the Obama Administration has made some serious errors in the rollout and initial implementation of Obamacare. Nevertheless, the ACA has already made a huge difference in the lives of people who now have access to health coverage due to important changes in the health care law. And now, in the final months of the first open enrollment session of the new exchanges, even more people will see better – and hopefully less expensive – access to coverage.

Why does the Church care about Obamacare?

For more than 60 years, Presbyterian General Assemblies have been calling for reform of the U.S. health system, urging the establishment of a national medical plan that will ensure universal health coverage for all persons residing in the United States. In 1988, the Assembly wrote, “Jesus’ command to love our neighbor requires persons with plentiful health resources both to comprehend the condition of those persons without basic health care and to share the means to health.” In other words, it is our collective responsibility as a community, and as a nation, to make sure that all people have access to the means to good health – that is, access to quality, affordable, comprehensive health coverage. 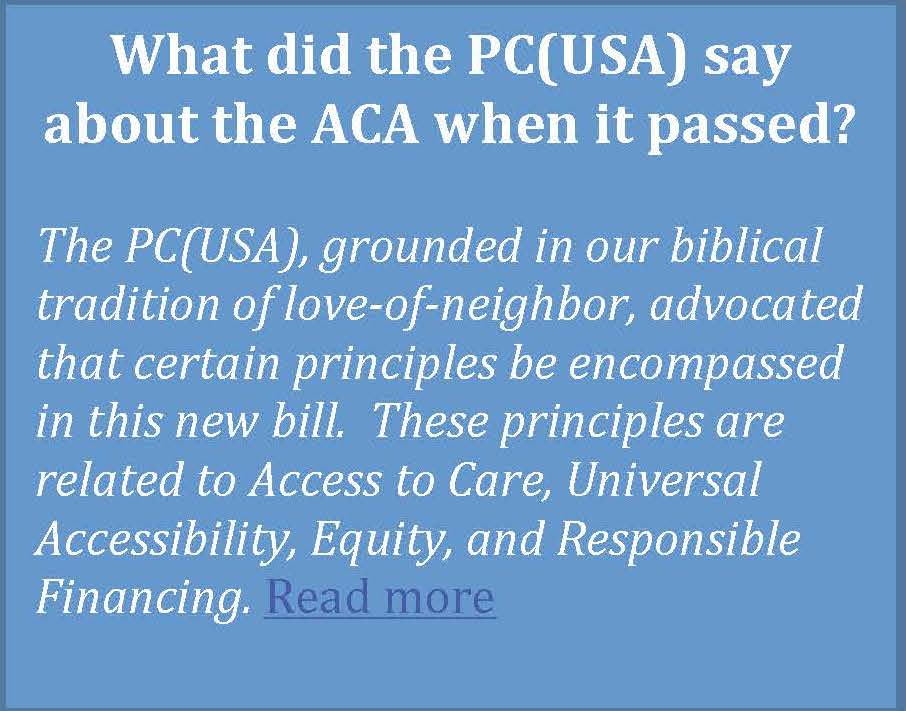 As yesterday’s article pointed out, the PC(USA) has supported the implementation of a national medical plan, or a single-payer system (i.e. Medicare for all), for many years, and the ACA still falls short of this ideal. However, as the Office of Public Witness engaged in the health care reform debate in 2009-10, we saw some significant opportunities. To be sure, we encountered some disappointments and missed opportunities, but we also witnessed some important steps toward increasing access to health coverage, especially for low-income families and adults without children. We saw sensible, preventative services and wellness care become available for millions of people who previously could only access health services through the Emergency Room.

We also saw many more opportunities to make reforms that move us in the right direction. Certainly, the PC(USA)’s long-standing commitment to health, wellness, and universality of coverage would have moved us away from the intervention of private, for-profit insurance companies, had that been a political possibility. However, decades of Presbyterian witness lead us to believe that the ACA is making improvements. Furthermore, we urge its critics give it a chance to work.

So, what does the ACA do?

Well, right now, and most in the public eye, the new “exchanges” have gone live, and Americans are purchasing health insurance, many with the aid of need-based subsidies from the federal government. Despite a botched initial roll out, many anecdotes suggest that people are now having positive experiences using healthcare.gov or their own states’ systems. So far, 3.3 million people have used the exchange to obtain coverage, and the enrollment period has not yet ended. Enroll America has some great resources, as well as a subsidy calculator and of course, healthcare.gov is the place to go to enroll.

But insurance has never really been the faith community’s concern. As the PC(USA) and its partners have engaged the health care debate, our primary and immediate concern has always been people – their health, their care, and the shalom that God intends for all of us. Access to health insurance is a means to an end, and that “end” is making sure that more people can live healthy, whole, safe lives, free from the fear that the next illness will mean not only personal tragedy but also bankruptcy.

Ultimately, our concern has been people’s access to care. And despite its shortcomings, the ACA’s reforms are making health care more accessible for more people.

Certain reforms went into effect even before the new exchange launch that has been making headlines. In many ways, what seem like the small changes have been some of the greatest accomplishments of this law. For example:

Some of the more substantial changes have also turned out to be huge victories:

Where do we go from here?

There is no question – this is not the final chapter in healthcare reform. Many new reforms and policy changes are still required to improve access and quality, to reduce costs, and most importantly, to make sure that all people living in this nation have access to the care they need to live healthy, whole lives. For those who were disappointed that the ACA was not a single-payer system, or even that it did not include a public option, take heart. We know from experience that the implementation of major new government programs will inevitably lead to more discussion, tweaks, improvements, and ongoing policy debates. The conversation will continue. After we’ve lived into the new current system, we’ll have to figure out how to improve it…again.

Sabrina Slater, Intern for Public Witness, contributed to this article.

Sabrina Slater currently serves as an intern for the Presbyterian Church (U.S.A.) Office of Public Witness. Currently pursuing a Master of Divinity degree from Princeton Theological Seminary, Sabrina is interning while spending a semester in DC with the National Capital Semester for Seminarians program hosted at Wesley Theological Seminary. Her advocacy focus includes domestic poverty, the relationship between poverty and violence, human trafficking, women and relationship violence. Having enjoyed a career in higher education prior to beginning the ordination process, Sabrina is committed to honest dialogue and hearing peoples’ voices and stories. Sabrina holds a Master’s in Education with focus on general and special education from Wagner College and a Bachelor of Arts in Cognitive Science and Health & Human Development from Lehigh University.