August 5, 2012, is Homelessness and Affordable Housing Sunday. But it is not just another “issue” day. It is churches in the Presbytery of Cincinnati working together with other people of faith to save the Anna Louise Inn, an institution that has been providing safe, affordable housing for women in Cincinnati since it opened on Memorial Day, 1909—a home now threatened by a corporation that wants to seize the land and build condominiums.

This Sunday is also a day for people with nowhere else to go:

After losing her job, Sarah’s daughter recommended that she move to the Anna Louise Inn as an affordable place to live. In addition to a safe home, she has found a new family of women. One thing Sarah loves about living at the Anna Louise Inn is the many friendships she has built. She and another woman on her floor knock on the wall between their rooms each evening before going to sleep to let the other know that she is okay.

In high school, Becky began using drugs. When her habit increased, it strained her relationship with her family. After several visits to treatment centers, Becky was sober and starting over. The Anna Louise Inn provided a place to live while she got her life back together. She needed time to save money, and she wanted a place where she felt safe so she could focus on staying sober each day. For a year, she lived at the Inn before getting an apartment of her own and reuniting with her daughter.

Anna graduated from a local college and earned a Master’s degree. Diagnosed with mental health issues, she has had difficulty finding employment. Sometimes her symptoms are bad; sometimes they aren’t bad. When she has an episode, it is difficult for her to leave her room. When she is feeling better, she is a productive worker. Right now, she finds comfort in living at the Anna Louise Inn, where she won’t be judged for her struggle with mental health issues.

Cincinnati Union Bethel, which operates the Anna Louise Inn, began with a group of Protestant ministers who came together to serve the needs of sailors coming into the port of Cincinnati in 1830, and soon saw other needs in the city. In the early 1900s, young women, who were coming to the city seeking work in offices and industry, often didn’t make enough money to afford suitable housing. Cincinnati Union Bethel, seeing the need, approached the Charles P. Taft family who gave the money and the land (literally in their front yard) to build an Inn that would house 120 women. They named the Inn after their daughter, Anna Louise Taft Semple. The Inn was filled on its first day and had a waiting list of over one hundred. The Tafts generously gave more money and land to expand the Inn.

For over one hundred years, the Inn has continued to provide safe, affordable housing in the same location under the supervision of Cincinnati Union Bethel, which is now a small non profit social service agency that oversees two other important programs: early childhood education and the Off the Streets Program, which offers support for women seeking to leave lives trapped in prostitution. 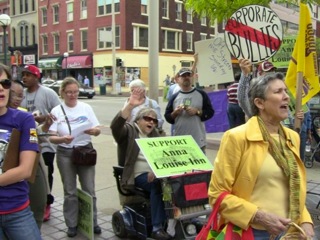 A New Threat
Almost two years ago, the Inn received zoning approval and found funding for a long overdue major remodeling of the rooms of the Inn – turning the rooms from their original dormitory style to apartments that will feature private baths and small kitchens.

But one of their neighbors, Western and Southern, a large multinational corporation, has been opposed to the remodeling of the Inn.

Western and Southern sought to purchase the Inn with the intent of tearing it down and building condos for ‘high end’ clientele, seeking to redevelop the area into a ‘gaslight’ district. Cincinnati Union Bethel, however, has remained convinced that the location is best for the women of the Inn and the rest of the neighborhood has been very supportive of the Inn.

So, Western and Southern has sued the Inn, Cincinnati Union Bethel, and the City Zoning board, in an effort to delay the remodeling of the Inn, and eventually drain the social service agency of its resources so that it will have to cry ‘uncle’ and be forced to sell the Inn to Western and Southern.

The situation will remind biblical scholars of the story of Naboth’s vineyard (1 Kings 21). The story goes like this: Naboth has a small vineyard; it is all he owns. But unfortunately for him, it happens to reside next to the palace of King Ahab of Samaria. Ahab decides he wants Naboth’s land for a “vegetable garden” and offers to buy Naboth’s land or relocate him. Naboth refuses, explaining that this land (much like the land donated by the Tafts) is his “ancestral inheritance,” the land of his family, and he cannot give it up. So Ahab’s wife, Jezebel, conspires with “the elders and the nobles” of the city to have Naboth brought up on false charges. After taken before this mock trial, Naboth is stoned to death, and his land seized by Ahab. All because Ahab wanted a vegetable garden.

The Religious Community Organizes
Last September, with the story of Naboth in mind, a group of pastors who meet regularly and are concerned about urban ministry, asked the Presbytery of Cincinnati to sign a letter of support for the Anna Louise Inn. The Presbytery voted unanimously to support the Inn.

Our recent theme is Western and Southern: Thou Shalt Not Steal the Anna Louise Inn.

The definition of stealing is “taking someone else’s property without permission or legal right and without the intent of returning it.” It does not matter how one does that (through physical threat or bogus lawsuits) and it does not matter why one steals.

And in this economy, when a large, wealthy, powerful corporation tries to take the property belonging to a small non profit social service agency who uses that property to provide affordable housing to women in need, we are shocked at the shamefulness.

We have enlisted the support of other faith communities, including Episcopalians, Unitarian Universalists, United Church of Christ, Muslims, and Jews; held rallies, prayer vigils, and fund raisers; written letters to the editor; and created web sites and Facebook pages to garner support.

At a recent rally, speakers from four national groups came out in support of the Inn, including the National Fair Housing Alliance and NETWORK (the national Catholic Social Justice lobby).

This is not just a Cincinnati issue.

Justice has no boundaries.

The question we have been asking is this: If corporations can do this, what can’t they do? 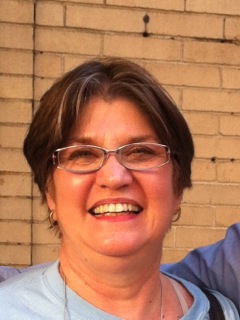 Rev. Susan Quinn Bryan is pastor of Mount Auburn Presbyterian Church in Cincinnati, OH. She is a member of the Urban Pastors Network, a dozen or so members of the Presbytery of Cincinnati – from newly ordained to honorably retired, some who belong to the Covenant Network, others to Presbyterians for Renewal, and others to neither. They have  been meeting together weekly for over 5 years in one another’s churches and homes to share breakfast, encouragement, best practices, spirited conversation, prayer, and  Bible study. While not all in urban churches, all have a connection with and heart for the challenges faced by urban congregations and communities. And that, they believe, has put them in touch with God’s heart for justice and community and what the Church should look like.
Share this
Tags:

The Nuclear Idol and the Genie of Creative Nonviolence