The Campaign for Fair Food calls upon major food buyers to end poverty and modern slavery in the Florida fields by working in partnership with the Coalition of Immokalee Workers (CIW), a human rights award-winning farmworker organization in Immokalee, FL. The Campaign is supported by religious, human rights, student and sustainable food organizations across the nation.

The Campaign for Fair Food has been successful in achieving landmark agreements between the Coalition of Immokalee Workers and some of the largest food corporations in the world: Yum! Brands (Taco Bell, Pizza Hut, KFC and others), McDonald’s, Burger King, Subway, Whole Foods Market, Bon Appétit, and food service providers Compass Group, Aramark, and Sodexo.

These agreements are changing the very structure of the food system so that it ensures the well-being of the men and women who harvest. These large buyers are paying a net penny per pound increase to farmworkers who harvest tomatoes for their suppliers, counteracting the downward pressure food buyers’ high volume/low cost purchasing has had on wages and working conditions. Through fair food agreements with the CIW, willing buyers and over 90 percent of the Florida growers are, right now, implementing a strict code of conduct, a cooperative complaint resolution system, a participatory health and safety program, and a worker-to-worker education process. 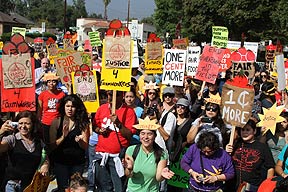 Call on Publix, Kroger, and Ahold supermarkets to sign fair food agreements with the CIW

Learn more about the Campaign for Fair Food, Conditions in the Fields, and the PC(USA)’s participation

Learn more about the Coalition of Immokalee Workers

Read about how the Campaign for Fair Food is addressing modern slavery in the fields (Slavery and the Food We Eat, CIW) 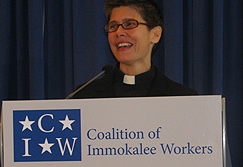 The Rev. Noelle Dam­ico is the Asso­ciate for Fair Food within the Pres­by­ter­ian Hunger Pro­gram, where she assists Pres­by­te­ri­ans in edu­ca­tion and action that ensure food, human rights and just social rela­tion­ships. She facil­i­tates the denomination’s involve­ment in the Cam­paign for Fair Food, our part­ner­ship effort with the Coali­tion of Immokalee Work­ers to advance human rights and socially respon­si­ble pur­chas­ing in the food indus­try, and sits on the Gen­eral Assem­bly Mis­sion Coun­cil human traf­fick­ing round­table. A pub­lished author of bib­li­cal, the­o­log­i­cal and litur­gi­cal resources, she is a con­trib­u­tor to the new “Preaching God’s Transforming Justice” lec­tionary com­men­tary, pub­lished in August 2011 by Westminster/John Knox.  She is mar­ried to the Rev. Jef­frey Geary, pas­tor of White Plains Pres­by­ter­ian Church and they live with their five year old son, August Xavier, in White Plains, New York.
Share this
Tags:

Faith and Facts Must Be Friends

Science is the analysis of facts, of measurable data. Faith is shaped

Review: THE GREAT CONVERSATION: NATURE & THE CARE OF THE SOUL by Belden C. Lane ( New York: Oxford U Press, 2019)

review by Nancy Corson Carter The dedication of this book, “For Grandfather—and

God of the rivers, valleys, mountains, and forests God of the lakes,

Written by Ani Fête Crews and Emily Parker, of BlessedTomorrow.org From beginning

The False Allure of U.S. Power Visiting the Peace Memorial Museum in

Article originally published in the Presbyterian Outlook on November 15,