A Critique of Paternalism in Missional Theology

“I think the idea is crap.”

This is what I told my professor as I introduced myself to a class on missional theology at Fuller Theological Seminary during the summer of 2010. I actually used another word, but that word is unfit for print.

Missional theology, as I understand it, is based on the idea that two disparate groups encounter each other and both sides are changed to better reflect the kingdom of God and the wholeness, the shalom toward which God calls Christians to work.

Missional theology takes place in an in-between or liminal space where both parties, the ‘servant’ and the ‘served’, are free to question their assumptions about peace and brokenness in the world – and then leave this liminal space transformed by the encounter. The assumption is that those who are served have a new understanding of the Gospel that is presented in word and deed, and will accept Jesus Christ as their savior according to the North American evangelical articulation of the Gospel. The servant(s), in turn, leaves the space with a better understanding of how the Gospel breaks into the brokenness of the world and heals it.

Over the course of that class our professor, the pastor and theologian Dr. Michael McNichols, shared stories of successful church plants in southern California where he worked to establish new faith communities that served their neighbors as an expression of the Gospel. Two of these stories stood out to me. In the first story, he told of a church community that reached out to the local high school kids and offered a safe place for musical ‘jam sessions’ and to discuss the matters on their hearts and minds. In doing so, the church created a large youth program that continued to grow as the youth group attracted many youth from outside of the church community.

In the second story, Dr. McNichols recounted how members from a largely wealthy church that he helped plant experienced a spark of transformation and heard the call to accept a homeless man whom they encountered on the way into worship one Sunday. Their community learned to accept a person regardless of their economic status.

I may be a bit cynical when it comes to theological trendiness, but there was a part of me that truly did want to cheer and join in the celebration as my professor shared these hopeful anecdotes about local churches experiencing growth and transformation. However, two pieces stood out to me from these stories, two pieces that point to the reason missional theology leaves a bad taste in my mouth.

First, both of these stories are told from the perspective of ‘servants’ who are white and middle-to-upper class. This tends to be the case with most people who would describe their theology and practice as ‘missional’. At best, this is problematic because it does not reflect the rich diversity of the North American church in terms of ethnicity or socioeconomic class. At worst, it reflects the continued assumption that wealthy white folks know what is best for the poor or the non-white.

Second, while I do not doubt that McNichols’ churches experienced a form of transformation as they stepped out of their comfort zones to accept those rejected by society, these stories seem to me to fall short of the comprehensive call of the Old Testament prophets and of Jesus himself to repent of our old ways and make a radical turn to the world-changing, life-upsetting justice to which our faith points us. Yes, we are called to the work of creating a community where people are accepted and to deepening our individual and communal faith, but that is only the beginning. God’s call to the Church is much more holistic and much more wide-reaching than opening our church doors a little wider. God calls us to work towards bring God’s peace and justice to a broken world. We’re not called to be hopeful anecdotes. We’re called to do a full upheaval of the whole system.

The working out of missional theology in the context of a divided city is especially problematic. Tucson, the city where I live now, is divided along both economic and ethnic lines. When I worked for a church in the barrio, I received a request from a church that, one might say, was seeking to “live missionally”. This church was located in the northern part of Tucson, where white, upper-middle-class and upper-class folks tend to reside, and the membership of this church reflected its social and geographic location. The church where I was working, on the other hand, was located south of 22nd Street, historically a dividing line between whites and people of color, between wealthy and poor. The call/letter I received came from a perfectly nice man/woman who wanted to bring a small group of their church’s youth down to the barrio for a morning of service. In their own words, they wanted to “bring Jesus” to the poor and non-whites who resided in the barrio.

The problem with this situation does not lie in the church’s desire to serve those in need or to teach the value of service to its own young people. One might even say that these things are commendable. 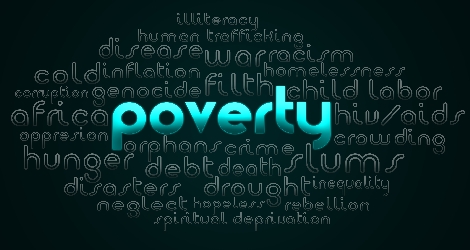 For me, the problem is two-fold. First, the assumption of the wealthy white church “bringing Jesus” to the non-white poor is that the people in the barrio are in some way religiously lacking, that they would benefit from a gospel that could transform them into the image of those living north of 22nd Street. This assumes that the sin is being poor. It makes no space to understand the systemic roots of poverty or racism, how the two intersect, or the specific challenges related to race, ethnicity, and economics in the context of Tucson.

Ironically, had the request been one for dialogue rather than to “bring Jesus”, the barrio church might have been able to share some Gospel truth with the wealthy church. For often, when Christians examine the root causes of poverty, when we encounter human-made systems designed to keep people poor and racist social structures that stand in the way of full equality, that we begin to truly understand such theological concepts as sin and grace. On more than one occasion, I have learned valuable lessons from the community of Tucson about the community of God.

Second, the call to serve for a morning or even a day leaves no room for authentic and lasting transformation. Traditional service activities focus on doing: feeding the poor, sorting clothes, or cleaning up a dirty lot. While these activities do have a role in creating a community, they only have the power to transform when both sides have the opportunity to serve as catalysts for God’s transformation. This means that both sides have the opportunity to share their stories, to confess their harmful assumptions, and to learn about the social and cultural structures that contribute to or detract from their ability to live abundantly – and the way these same structures may affect their neighbors quite differently. The ‘serve and run opportunities’ that I have encountered in the context of missional theology, allow for none of this.

Ultimately, my question is this: Is missional theology just another example of rich white people seeking to control the narrative on service? If so, ok. Let it add itself to the laundry list of paternalistic, ‘outsiders know best’ white savior theologies. But if not, it’s time to start looking at systems, to start talking about the structures that keep people segregated, marginalized, and poor.

I’d like to suggest we flip that paternalistic model of missional theology on its head. Want to really take mission seriously? Why not starting by sitting down and listening to the barrio church. Believe me, they have plenty of Gospel to share.

AUTHOR BIO: Rachael Eggebeen holds an MA from the University of Arizona (Tucson) in Near Eastern Studies and an MAT from Fuller Seminary. She is an eighth grade social teacher at Apollo Middle School in the Sunnyside Unified School District in Tucson, Arizona, where she attends St. Mark’s Presbyterian Church. She is a member of The Advisory Committee on Social Witness Policy (ACSWP), representing the borderlands and the barrios of the US-Mexico border.

Looking Back and Looking Forward: Renewing a Conversation about Mission in Hazard, Kentucky

The Church: Missional or Missing?

The Flavor of Mission in Fishtown