Discerning Peace in the 21st Century – Part I

We sat in a circle, our chairs so close that our knees touched and the conversation felt intimate. Following the order of lectio divina, we were sharing first scripture readings followed by silence and prayer, then a word or phrase, and finally our experiences. Do you feel any “nudges” of the Spirit? How is God’s peace calling you? Do you find yourself resisting any of the questions? Make note of those feelings or write them in a journal.

This is the way we began each of our four weeks of adult study in the Peace Discernment curriculum in the fall of 2012. The questions we were considering were not light topics and are in fact the kinds of questions that have led to vigorous debate and disagreement, even among friends:

Our intimate groups included a variety of perspectives: some were military veterans of World War II or Vietnam, others were involved in the Vietnam War era as protestors or as conscientious objectors, there were parents with grown children in the military and young people who couldn’t remember a time when our nation was not at war.

The opinions, experiences, and emotions expressed during these conversations were as deep and profound as any I can remember in this community. We talked about our fears of violence and war as well as concern that we might be complicit in evil if we did nothing to stop or prevent evil in the world. And yet, it was not a time of debate; it was a time of listening, of hearing how each of us, longing for peace, is trying to integrate our understanding of Jesus’ teachings with the reality of violence and evil in the world.

A Brief Overview of the 6-Year Peace Discernment Process

In 2010, on the 30th anniversary of Peacemaking: The Believers’ Calling and the formation of the Presbyterian Peacemaking Program, the 219th General Assembly (2010) authorized a six-year discernment process to take a fresh look at peacemaking in the church’s life. The Assembly’s action combined overtures seeking to review and strengthen the church’s policy and program after almost a decade of war and to examine particularly the nonviolent understanding of Jesus’ call to discipleship.

Two years later, the 220th General Assembly (2012) authorized study materials to be distributed and approved a two-stage process of face-to-face discussions in both congregations and councils. The Peace Discernment Steering Team put together an Interim Report and a wonderful curriculum that includes readings and questions to encourage and support conversations such as the ones I describe above.

Comments from those who attended the four adult study sessions that fall were unanimously positive. Following this series, the Social Justice Ministry Committee of First Presbyterian Church decided that they wanted to keep this conversation moving forward.

While we were pretty confident that our denomination would not be ready at this time to declare the PC(USA) a “peace church,” the committee decided to explore the possibility of our local church, First Presbyterian Church of Palo Alto, declaring itself a “peace church.” Our congregation’s Social Justice Ministry Committee has written several versions of a resolution explaining what we think that would look like. In consultation with session, we have held several open meetings for our congregation and received very positive feedback and some critiques. We are attempting to incorporate those expressed and legitimate concerns in the latest iteration of our work. 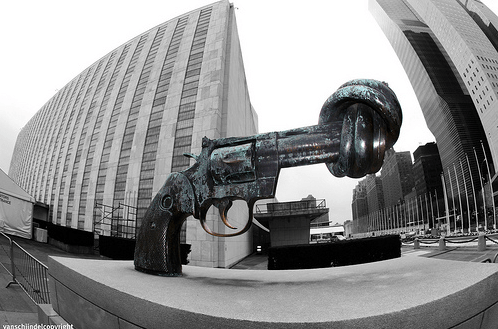 At one level, we all want session to approve a resolution that has broad congregational consensus, but on another level, we want to keep this conversation going. (Perhaps that is why we have been working on this for 3 ½ years!) We want to keep it going because this is one of those places where Jesus’ teachings and our experience of the world clash. I think of it as two wires, one with a positive charge and the other with a negative charge, and when they touch (as they do in our honest conversations and confession of our fears), sparks and energy and vitality are the result. This is part of the work of peacemaking and we should consider it a spiritual discipline.

The responses received from these face-to-face conversations collected from 65 congregations and presbyteries all over the country informed the Steering Team in developing five affirmations that were presented to the 221st General Assembly (2014). The 221st General Assembly received the Five Affirmations, made several changes, and approved them for distribution to the presbyteries for consideration. The results of these discussions and votes in many presbyteries around the country were then included in the Advisory Committee on Social Witness Policy (ACSWP) final report to the 222nd General Assembly as Item 12-06 in the Peacemaking and International Issues Committee.

The Once and Future Church

The peace discernment that the church has been involved in for the last six years is more than quibbling about church policy; it is asking questions about what kind of church we want to be. In the words of the interim report of 2012, “There is a clear predilection for nonviolence in both the example and teaching of Jesus and in the practice of the early church.” Indeed, there are many examples of Jesus calling on us to “turn the other cheek,” “go the extra mile,” and reject the impulse for revenge and violence (e.g. Matt 26:52, Matt 5:38-48, Lk 9:51-62). And the early church also committed itself to this ethic of love, including prohibitions against violence and sanctions against those who commit such acts.

Then in the fourth century, when the Roman Emperor Constantine became a patron of the church, the church experienced a reversal of fortune from being a persecuted minority to being welcomed into the halls of power. All the lands taken from the church were restored, laws against Christians were rewritten to favor them, and Christians began to take up arms to fight on behalf of the Roman Empire. Out of this whiplash of historical events, Bishop Augustine of Hippo began to develop a theory or rationale for using violence that we commonly call just war theory. This theory describes when the use of violence, both in starting a war and during war, is morally justified. Just war theory has been part of Christianity’s history ever since, though in practice virtually every war violates the parameters of just war.

So what does it mean to be a Christ-follower in the 21st century, when our nation has been at war for almost 15 years, when acts of terror and anarchy are spreading around the globe, when ever-increasing military budgets and interventions around the world seem to only inflame violence? Do just war policies still represent the best of the church and Jesus’ teachings? Or are we being called to reconsider our commitment to just war as a guiding principle for the use of violence?

During the open hearing portion of the Peacemaking and International Issues Committee discussing “Risking Peace in a Violent World (12-06),” Elizabeth Welliver, a recent graduate of Davidson College and former intern at Southside Presbyterian Church in Tucson said that “boldness” brought her to the church. She explained that she witnessed this boldness in congregations in Tucson working to end the militarization of the border and advocate for migrants’ rights. She continued, “I saw mission co-workers in El Salvador and Palestine boldly work for sanctions against death-dealing military organizations. And I saw bold commitment among fellow college students to study peacemaking in our scriptures. This boldness has equipped me with the faith I have today in Christ as the Prince of Peace.” (Read Elizabeth’s article in this issue here.)

As a university campus minister, I often hear from students that the church and religion no longer inspire or interest them. They do not see the church as reflecting their values of justice and peace; for many the church has lost its relevance in the face of acquiescent support for war abroad and homophobia at home. If you think this overstates the case, then I would ask how many of our churches, in the lead up to the Iraq war in 2003, held Bible studies, forums, adult studies, or preached on the issue? When I ask students who have grown up in mainline denominations that question, they cannot recall a single instance where the subject of war in relation to our faith has been discussed.

My work on campus challenges me to let go of traditional ministry and celebrate the values I share with many students regardless of their religious affiliation. If the church is going to remain relevant, we must be willing to embrace the boldness that Elizabeth describes, a boldness that challenges the status quo of militarism and empire. We must decide what kind of church we want to be. Imagine such boldness for justice as the key to evangelism and outreach to young adults like Elizabeth.

The committee and the plenary assembly voted overwhelmingly to support the report and a revised version of ACSWP’s affirmations of peacemaking. However, the true test of boldness will be whether we are willing to embody this radical peacemaking into the actions of our church. The very future of the church may depend on it.

AUTHOR BIO: Rev. Geoff Browning is the UCCM Campus Minister at Stanford University and the Peacemaking Advocate for the Presbytery of San Jose. He enjoys exploring the intersection of spirituality and social justice.

Recovering from the General Assembly